The song during the pre-show was a tip-off I suppose. While the title says the show is about a boy, this song says otherwise.

And there it is, right on the poster.

When I say “classic” I’m also referencing existing texts, known storylines and even familiar turns of phrase, very much as the title might suggest, and certainly along the lines of the picture.

Eric Woolfe is the writer, grabbing chunks of known horror texts from romantic literature, theatre and film across a couple of centuries.That Woolfe has sewed them together as though it were a quilt is only appropriate, although come to think of it there’s another more grotesque kind of sewing invoked, using pieces of human bodies rather than fabric.

Did I make you shiver? Did I?

Woolfe is respectful of the integrity of the bodies he’s plundering, whether we’re speaking of captured flesh or text.  It’s not a neat & tidy split between Kimwun Perehinec’s beauty and Woolfe’s grotesquerie.  Both of them take their turns trundling down the thoroughfare of terror.  Both look good with red all over their hands.  Depending on how suggestible you are, it’s a matter for giggling or gagging. 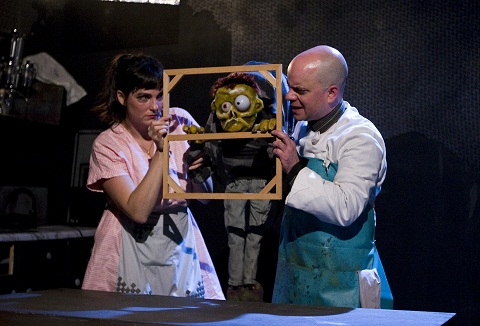 Frankenstein’s Boy puts Woolfe and Perehinec onstage at the Red Sandcastle Theatre, a deliciously intimate space seating perhaps fifty or fewer initiates as though at a seance on Queen St East.

We didn’t join hands however.

I watched a very eager audience lean forward, clearly familiar with Woolfe & his body of work (or should that be “bodies of work”?) for Eldritch Theatre.

Woolfe and co-conspirator Perehinec create a horde of creatures with varying degrees of humanity, a multitude of voices, body-shapes, and impersonations.  At times I wanted to second guess, observing the choices made between scary and silly, the willingness to hold us in suspense or make us laugh. But then again, how real would I want the illusion to be? How genuine the blood and gore? At times Perehinec & Woolfe choose to let us see how they’ve made their magic, making this a safer voyage than what it might be. Even so we’re still sometimes right on the super-sharp knife edge… Coming into the theatre on a Sunday afternoon from this friendly neighbourhood, I’m feeling confident and giggly rather than shivering with fear. This could be a nasty journey if undertaken on a dark night. I wonder if Woolfe & Perehinec will be scarier as they get closer to Halloween?

In the meantime, I commend you to the Eldritch Theatre website, where the biographies demonstrate Woolfe’s darkly comic sensibility. For more of the same visit the Red Sandcastle Theatre, 922 Queen Street East October 23th – November 8th: if you dare.