Closer to the Barber

I had another look at the Canadian Opera Company’s production of The Barber of Seville, this time up close (aka my subscription seats which are in the front of the orchestra).

The sensibility of Els Comediants (the team behind the direction & design of this production) calls attention to the materialist underpinnings of the opera.  It’s not quite Marxist but most certainly putting money and wealth in the foreground of the story.  The Count Almaviva might be a nice guy, but he’s also wealthy as Croesus.  It means that while we have lots of fun in the opera, there are reminders of the darker side of life.  At moments throughout we see observers who might be street people, average souls who are outside the story watching it unfold, and in the process lending everything a little more dignity if not actual weight.  Near the beginning, when the Count sings for his beloved, he throws great wads of money at anyone in the vicinity, especially the musicians who accompany his serenade.  At the final curtain, money comes raining own on the audience in the front section. 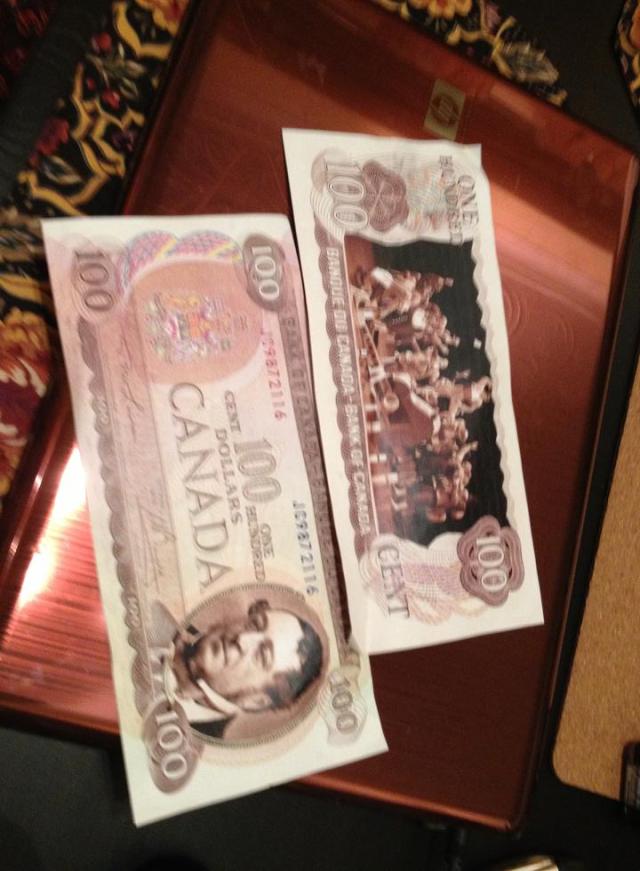 The money that fell from the sky… but that’s no Prime Minister’s face on that bill.

It’s not real money of course, and it’s just another bit of fun.

As before, the two strongest portrayals were the chief antagonists, namely Almaviva and Bartolo, as played by Alek Shrader and Renato Girolami.  Shrader’s masquerades are slick, his coloratura delicious, his manner so attractive that even a Communist would have to forgive him for being so rich.  Girolami is a thoroughly lovable Doctor Bartolo, feeling very much the authentic buffo comedian in his singing & larger than life mugging.

New to the production on this occasion was Cecelia Hall as Rosina, who’ll sing the remaining four performance of the run (after tonight’s show).  I may be oversimplifying but I’d contrast her approach to Serena Malfi, in an emphasis on musicality & voice; where I think Malfi is funnier, Hall seems to have an amazing range, offering up a great many notes below middle C as well as lots at the top as well.  Joshua Hopkins is a lyrical bel canto voice perfectly suited to the role, energetic in his physical comedy, always with a winning smile.  Robert Gleadow probably got the most laughs per minute onstage as Don Basilio.  And Aviva Fortunata sounded even more impressive the second time, her big voice showcased in this little role in one of the more interesting casting choices of the season, her colour adding a wonderful dimension to the ensembles she’s in.

There are more casting changes ahead, plus a performance by the Ensemble Studio Friday May 15th.

If Rossini wasn’t one of the Fathers of Confederation, maybe he should have been. Click for more info about the production.