The Hutcheons launch Four Last Songs with, what else: singing

When multi-disciplinary authors launch a book, you see people from many places & walks of life.  Whatever else you might say about Linda & Michael Hutcheon, they know some very cool people.  I saw singers, librarians, academics from several departments, and many of the people associated with the opera business in this country. 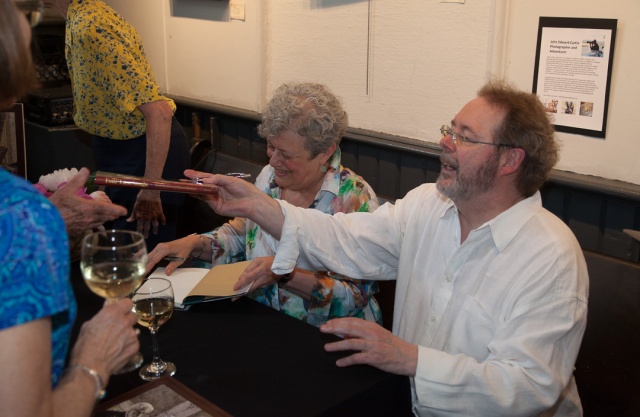 Three of the four composers in the book were represented in the mini-concert that was like the delicious bottle of champagne christening the book, except nothing had to be smashed across the bow of a boat (or book for that matter).  The only one missing and rarest of the four was the most recent to be heard in Toronto namely Olivier Messiaen, thanks to Against the Grain’s Death and Desire, a show that the Hutcheons generously supported in their other role as patrons.

The other three?  Richard Strauss, Giuseppe Verdi and Benjamin Britten.

We began with three works from Britten sung by Lawrence Wiliford, who (if I understood what I heard) was introduced to us not just as a singer but also as an actual source for the book in his research on the late composer.  This isn’t the first time Wiliford—the co-artistic director of Canadian Art Song Project—has wandered the borderland between performance and research, a frontier involving creativity, exploration & discovery.  No wonder then that both his performances and introductory comments were genuinely authoritative.

These works, from among Britten’s last compositions when he was no longer able to play the piano and therefore wrote for the harp, were accompanied by harpist Sanya Eng.

We began with “A Hymn on divine music”, a song by Croft arranged by Britten in a style sounding like Purcell.  “Canticle V” brought us powerfully into the 20th century, a far more challenging piece especially for harpist Eng.  And finally we heard “she’s like the swallow”, Britten’s arrangement of the Canadian folk-song.

First came Nannetta’s serenade from Verdi’s last opera Falstaff, one of the operas featured in the book.  Where Djihanian gave Verdi a playful ride, she followed with a thoughtful reading of Strauss’s “Zueignung” (or “Devotion”).  When she closed with the song’s heartfelt expression of gratitude, she could have been speaking for all of us to the Hutcheons.  They may have retired from their roles as professors at the University of Toronto, but they continue to lead exemplary lives, contributing to the richness of Toronto cultural life.