I had the pleasure of hearing the Toronto Symphony play Rimsky-Korsakov’s Scheherazade the final three times they played the work on their recent Florida tour.  As a souvenir of my trip, I’ve had a CD in the car for literally months complete with Peter Oundjian’s autograph, their Chandos recording from 2014.  By now I know every wrinkle of this recording, that’s admittedly a bit different from what we heard live.

It seems fitting to be looking back at Florida and the TSO this past few months, with this week’s announcement (read it here) of the mutual agreement between the TSO and Jeff Melanson to part company, after some bombshells in the newspapers about JM’s private life.  While I was reminded of Bill Clinton –and the talk of impeachment swirling around him in the 1990s—there are some key differences.  The people contemplating handing over their money to the TSO care about optics, superficialities, and that’s pretty much as expected.

There’s a certain irony that the big headline-grabbing story with which Melanson first caught my (our?) attention has huge resonances with the current story.  Remember Valentina Lisitsa? I confess I was a bit infatuated with her forearms, in love with the fluidity of her Rachmaninoff even if I hadn’t yet read her tweets.

In a curious sort of justice, Lisitsa’s appearance was cancelled for behaviour having nothing to do with her pianism. How apt that the TSO now seems to do to JM what he did to VL: to make a decision about performance based on criteria having to do with optics (her political tweets, his personal life), rather than performance.

I have a confession to make.  I was a disgruntled ex-subscriber to the TSO.  I’d gone to hear concerts and seen them play brilliantly in one part of the program, then indifferently after the interval.  Part of it was the sound in the hall (was i unhappy or the players? maybe both), although the acoustics are better after some money was spent to renovate.  It was maddening, as I wondered why performances were so variable.  But maybe all it took was time, as gradually more and more of the players were Oundjian’s young discoveries, a growing consensus that became a kind of critical mass.  With Jonathan Crow and Joseph Johnson front & centre playing solos in the Rimsky –as they do on the CD—this is more and more, an orchestra who seem genuinely committed and happy, and at times brilliant.  The birthday concert for Oundjian featured a love-letter from the orchestra, also known as the Pathetique Symphony in the most committed playing I’ve heard from this orchestra this century.  We go back a long way (me and the TSO that is).  I recall hearing Jessye Norman sing Wagner with Leinsdorf leading, I remember Ancerl’s Beethoven and Davis’s Mahler.  The TSO are back, in the same way that Justin Trudeau says Canada is back: after a struggle in the wilderness.  It doesn’t matter.  I’m won over completely. 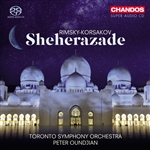 I said something relatively nonsensical to Peter Oundjian who had the grace not to roll his eyes too outrageously, when I compared him to a talk show host. No I didn’t mean I disliked his chats before the shows (which I miss! …perhaps he’ll be reinstated for awhile?).  I was thinking of the way he led the Rimsky.  He was among friends, in this magnificent work full of solos and showcases.  While Crow gets the lion’s share of virtuosic moments, he shares the spotlight.  I watched the delight on Oundjian’s face leading this talented young group, as I watched his genuine appreciation for what he was hearing.   The tempi were left in the hands of the soloists at those moments, while the leader simply smiled his blessing on the players.

In Florida the tempi were wonderfully rhetorical, full of theatricality.  When we get to the call and response of the trumpets & trombones in the second movement (is it a call to battle? Or so it seems), Oundjian defies the tempi I have always heard and which I am pretty sure are in the score, as he lets the trombones ham it up, playing super slow and fat, while the muted trumpet reply is silly as vaudeville.  While I seem to be implying that the tempi are free –at least as far as their avoidance of being super strict—the playing and especially the ensemble is oh so tight.  This is what I heard since that birthday concert, that this orchestra is playing for Peter O as they haven’t before. There’s a kind of unanimity and commitment that pushes it to a higher level.

Peter Oundjian, autographing the Scheherazade CD for (lucky) me

I grew up listening to this music, on stereo vinyl recordings without the kind of crisp sound you find on this CD.  The TSO have had an infusion of young talent to complement the players already there.  They sound amazing.  I’m looking forward to my next live concert, but for now, I’ll content myself listening to Scheherazade once more.

This entry was posted in Music and musicology. Bookmark the permalink.