This review has had a long gestation.

But let me say first, Schubert is not usually understood as any sort of mystery, and maybe that’s a problem. When I open my Schubert impromptus or sonatas, having heard others play these pieces, I might think I know how they’re supposed to sound. Conventional wisdom..! But it can be a trap if it means that everyone approaches a text the same way.

So let me go back in time, several months in fact.

When I first started listening to Janina Fialkowska’s recent ATMA recording of Franz Schubert piano music, I was taken aback in the first half-minute of listening, puzzled in fact. I listened to the CD –comprised of a piano sonata and four impromptus—at least five times in the summer before setting it aside. The playing is phenomenally accurate, and at times dazzling for its virtuosity. I was puzzled, though, so I put it aside. I didn’t realize how I could write about it, as I was trying to reconcile the excellent playing with the puzzling readings. 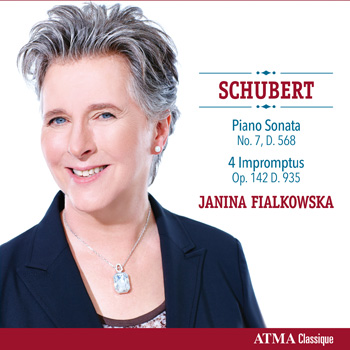 I was unwilling and unable to review it, because of misgivings that began in that first half minute. I was listening to music that I thought I knew, music that I have been playing on the piano since my teens. The music on the CD was played really well, so I couldn’t simply complain that it was flouting the usual. The traditional way it’s played? it sounds a lot like what it’s understood to be: transitional music leading us to the German romantics (Schumann, Mendelssohn, and eventually Wagner). We have been told that Schubert is full of songs and melodies, offering us an alternative to the composers employing counterpoint such as Bach, Mozart, Haydn & Beethoven, to name its most famous exponents, leading us in a kind of alternative path to melodists such as Tchaikovsky, Mahler and Shostakovich. No wonder he was at times under-estimated, given that a set of assumptions verging on stereotypes underlie the reception of his music: assumptions brought to bear on performances and interpretations.

So here’s the thing, when I went looking for something to help me understand and defend what had initially bothered me about the CD I found something, and it’s not just relevant but indeed, subversive of that conventional wisdom. Schubert’s grandfather was a Moravian, from a part of central Europe that is part of Bohemia. I had originally thought to call this piece “Schubert’s Moravian Rhapsody” and then decided to follow my first impulse, even if I might attract a readership who’d be wondering when the guitars start and whether Freddy Mercury is the natural heir to Schubert.

Haha as if I could be so lucky.

But I mention Moravia & Bohemia in the interest of shining a slightly different light on Schubert, particularly after my weeks pondering Fialkowska’s CD.  Now I’m feeling something more like elation, having clicked into a whole new way of understanding her CD, after following up on a hunch in my online reading about Schubert’s background and his music.

If one wants to make Schubert part of the irresistible evolution of German music, the unstoppable steam-roller driven by Bach, Mozart, Beethoven and eventually Wagner, one tends to respond to his affinities to that style, while ignoring the anomalies. This is a bit like doing research where you ignore any evidence that won’t support your conclusion (and please note, I believe performance is a genuine kind of research, as interpretations are propositions). And so his symphonies –which are marvelous – are seen through that lens, as are his piano sonatas, quartets, and songs. The quirky music that doesn’t match the role Franz is asked to play, indeed forced to follow because it’s in the script? They don’t get programmed quite so often, because indeed, maybe they don’t make as much sense, as part of the irresistible tide of German music.

Now of course, if one embraces his ethnicity? That’s a different story.

Now I will push pause on that discussion, while sidling up to Fialkowska, who may think I owe her a big apology for beginning this review with so much apparent negativity. I bow to her in all respect for a CD of some brilliance, bordering on genius. I think she might read this and think I’m full of crap because I don’t believe she came at Schubert with any of these assumptions. Nope. She’s playing this music, reading it according to her creative instincts and her taste, not by some sort of treatise. This is me deconstructing / analyzing my first response, trying to understand my initial misgivings, that have given way to huge admiration. And what’s more, I am thinking about how this approach might be exported to other Schubert works, not just piano but large scale pieces. But perhaps first I should talk about what Fialkowska played on her CD.

When I began with this CD, I listened to the opening movement of the Sonata in E-flat, aka D. 568, and then put it aside, perplexed. I remember thinking of Jan Lisiecki, but unable to make sense of the association at the time. I’d dismissed the thought because I figured I’d connected a pair of Canadians of Slavic origin, and nothing more. But later, I recognized something in her playing that resembled his playing. They both play a bit fast and loose with tempo, as an expressive device. This isn’t rare, but I think the way they do it is connected through that Slavic heritage, a refusal to be quite so Germanic. It’s not uncommon to encounter such liberties in a performance of Chopin, but much more unlikely when it’s Schumann or Beethoven: two composers I’ve heard played by Lisiecki.

I may seem to be off on a colossal tangent, but it’s just that I more than got over my initial misgivings, and went from being perturbed at what I originally felt Fialkowska was doing to Schubert, to being intrigued at a doorway she opened. Maybe we need to look a bit closer at the music of Schubert, especially as far as rigid assumptions about how he should be played. Perhaps Schubert has some unexplored affinities with Chopin that deserve a fuller airing. I’d love to hear more from her in this vein.

The CD offers four impromptus op 142, that are the less – often programmed ones: which means, the ones that don’t quite conform to the usual understanding of Schubert. These are the ones that are more ethnic, more quirky, at least in Fialkowska’s interpretation. But I was particularly blown away by her insights with that E-flat major sonata, bringing out a whole new flavour of Schubert that I’ve never encountered before.

I will be watching to see what she does in future, as I suspect there’s more to come.