The headline is meant to convey an enthusiastic response to something I’ll attempt to analyze.  I liked it.

Alison Mackay has grown from her role playing violone & double bass with Tafelmusik into their programmer extraordinaire, creating a series of inter-disciplinary programs over the past decade. I thought that last year’s Sesquicentennial project Visions & Voyages: Canada 1663 – 1763 raised the bar, in its integration of politically charged cultural history, employing music, text and images to explore the relationships between Indigenous Peoples and settlers.  In that concert I felt Mackay was going beyond her previous role as a curator of images, words & music to venture something deeper & more ambitious.  While it’s not opera nor fiction it begins to resemble a kind of documentary, opening a very special kind of conversational space.

And now Safe Haven has taken us further, a remarkable combination of elements that for me succeeds admirably. The title reflects a kind of mission I sense in this piece and among the performers. I call it a piece because I think we’re again beyond the realm of curated content and into something resembling an inter-disciplinary performance. Where Visions & Voyages was likely commissioned in context with the Sesquicentennial and as such had a kind of formal guise in a desire to explore the very meaning of “Canada”, this is I believe an even deeper venture.

But we’re not exploring because of some abstract date on a calendar. I think there’s a genuine concern underlying this piece drawn from the headlines and arrivals of refugees in the past year. We are exploring the phenomenon of exile, the motivations and experiences of the refugee in different centuries in diverse circumstances. While we discover instances in the first half of the evening, of the fertilization accomplished by displacements –as if to present us with the historical evidence that refugees are good for a society—in the second half we’re much more into a pure celebration grounded in musical terms, the actual experience of the encounter itself. Where the first half was intellectual and linear, as we move towards the end of the concert, we could be in any century, watching the cross-fertilization of musics and musicians meeting not so much face to face, as sound to sound, at times in a kind of intercultural jam session. We revisit Vivaldi with some new exotic instruments.

So yes, I thought I sensed Mackay pushing the envelope even further this time. Where the first half felt like the documentary, recounting history through the use of musical performance, images and text but carefully narrated and logically unfolding, the second half went in a slightly more reflective and purely emotional direction –not unlike what we’d seen last year—as the purely musical and celebratory side came to the fore. The intellectual edge of the first half was balanced by a more purely abstract exploration.

I recall a conversation with Eliot Hayes many years ago, when my operatic ideas got shot down on the premise that I was hazarding “big ideas”. The word was spoken with a kind of embarrassment, as though I should have known not to believe I should ever undertake such complex topics.

Yes big ideas are hard to present. Last year’s Visions & Voyages was important precisely because of ambition, of daring to undertake impossibly complex and abstract subjects. And yet this year dares even more, going further.  I can’t think of a more thorny topic than the images we’ve seen in this country showing families in boats, hearing of children drowning. For me this is what is so astonishing, as Mackay in her last two programs for Tafelmusik dared to undertake something far beyond mere music.

I’ll be thinking of these composers in some new ways as a result of this program and the fascinating links. I already knew of Vivaldi as an inspiration for JS Bach, but discovered more tonight. I would never have connected Lully to the Huguenots and their exodus from France. 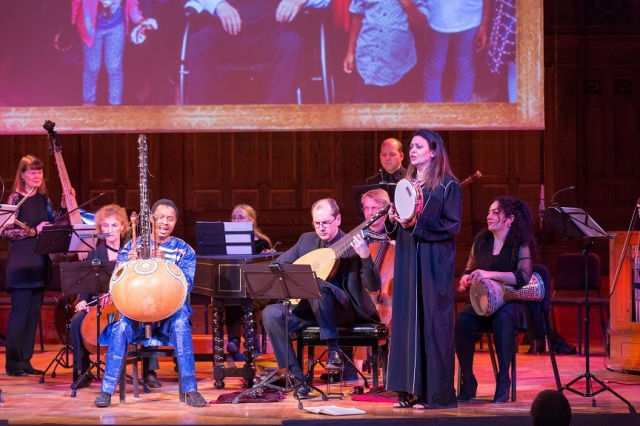 I can describe some of the participants for you, but my words can’t nearly create the effect you have when you hear Diely Mori Tounkara’s kora, whether gently intoning a solo or played as part of the Four Seasons. Or I can mention Maryem Tollar’s narration & singing, or the percussion of Naghmeh Farahmand. As much as this presentation concerns welcoming people into cultures, it was also a concert enacting a welcome to musicians on the stage at the Jeanne Lamon Hall at Trinity St Paul’s Centre, Tafelmusik showing us what a welcome looks and sounds like.

I’m eagerly anticipating the time when they put this onto a DVD, as I really want to be able to watch this and absorb it further, a creation of wonderful richness, and great beauty. And of course I cried in a few places. That’s the thing with big ideas. They’re unwieldy and dangerous but they must be addressed. I feel I must add as a sort of afterthought (the morning after, still in awe), that for some of us this is pushing very personal buttons, recalling family escaping Budapest and other Hungarians hazarding the mountains, having parts amputated from the cold, but still grateful for finding this particular safe haven, Canada. I’m running that Biblical passage through my head in a slightly different version, impressed with the empathy at the core of Mackay’s imagination (thinking of doubting Thomas & faith).  Blessed are they who see suffering and offer refuge. But especially blessed, to empathize without having seen or lived through it.

So of course, tears. 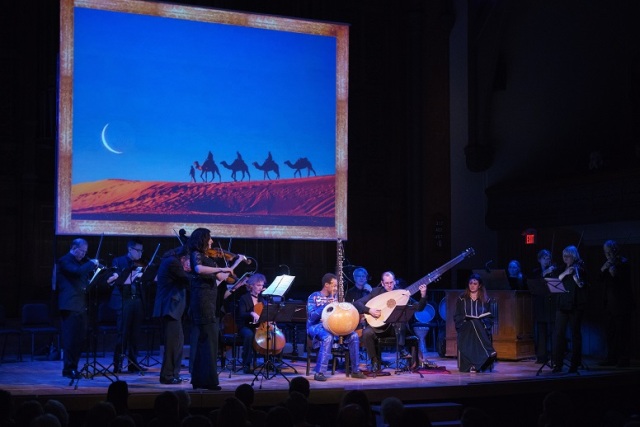