The hybrid creation Revisor from Jonathon Young and Crystal Pite is so much more than I can put into words, a piece of theatre that explores the process of signification while showing us the ways that it breaks down. It’s a Kidd Pivot production presented by Canadian Stage at the Bluma Appel Theatre based on Gogol’s The Government Inspector.  Tonight was the Toronto premiere.  Gogol’s play doesn’t fall easily into a genre, bearing witness to human events that can be played as comedy even as they show us the darkest aspects of human nature.

But don’t get me wrong. For all the seriousness, all the intense people in the audience, there was a great deal of laughter in the theatre. 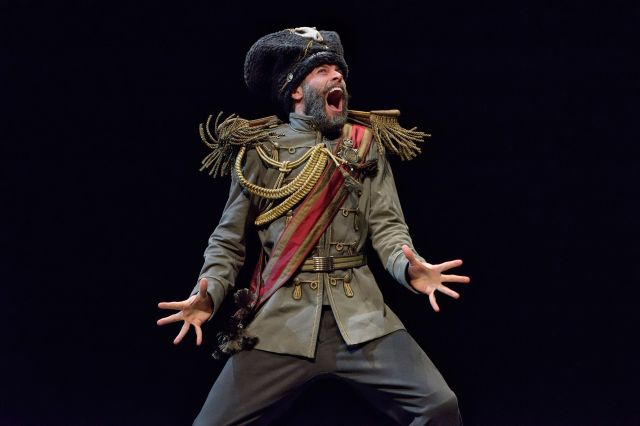 Gogol’s story is about an imposter confused with someone of far greater importance, and the upheaval caused by this case of mistaken identity. At its root this is a story about metaphors & symbols, how we let images & shapes & sounds stand in for something else, often without any real authenticity or connection between the thing and its image.
Someone on this creative team had a stroke of inspiration as to how to tell such a story.

Why not lip-synch, someone thought.  Why not create a disconnect at the root of the show..?  Let the falsehood in the story be right in the structure of the show.

Do you remember Milli Vanilli? I ask because that might be before your time if you’re a younger reader. It was 30 years ago. Imagine a musical act winning a Grammy, and the scandal when the truth came out, that the two people we thought we knew to be the stars were not actually the ones singing, but just the faces on the albums, who had been lip-synching along on TV to performances by an entirely different band in a studio.

Or there’s the big secret in Singin’ in the Rain (that of course the audience is in on throughout): that Lina Lamont isn’t the one heard speaking or singing in The Dancing Cavalier, but rather Cathy Seldon (the real singer, who’s played by Debbie Reynolds).

But Revisor is very different from Milli Vanilli or Singin’ in the Rain.   Yes we hear voices speaking who seem to be the characters onstage. While the voices (other than the narrator) are associated for us with a person dressed as one of the characters from the play, that body does much more than simply mouth words. Instead they are moving.. oh my are they ever. They’re dancing, gyrating, enacting, as though the words were electricity going into them, or a musical score animating their movements (you can get a tiny inkling from the photo above: but now animate that image of Doug Letheren in your mind, turning it into something super-fast & super-skilled).  They do much more than just mouth words.  It’s a good thing there’s someone else doing the voice onto a separate track, when the bodies are working so hard in response.

Pite & Young must have noticed how this separation of the dancer & the voice is an opportunity, not so different really from what Milli Vanilli or Lina Lamont noticed. If you have someone else sing or speak for you, it frees you to do a better job. And so instead of merely speaking, some of these moments become tremendous explosions of physicality. Dance! Athleticism! Gyrations! If you think about a triple threat – the person who can act & sing & dance—this is a wonderful solution, if you get a superb dancer, while using voice-over instead of making the dancer sing & act.

Sometimes we are seeing the same scene we already saw done earlier, but with a narration instead, and a different look to the characters, literally divested and broken down, analyzed in the bare bones narration of people identified merely as “1” or “2”.
As with previous Kidd Pivot presentations that we’ve seen here in Toronto (such as Tempest Replica or Betroffenheit or Dark Matters ) there are at least two discourses in combination:

The fact we’re in a story about an imposter, told by a series of imposters –people moving while someone else voices them—problematizes the entire tale. Just what is real, after all, when we’re seeing symbols, figures standing in for others..? It’s a very slippery slope, before things cease to mean very much at all, a blurry realm of bodies and voices, reaching out to one another as a cover story for their existential insecurity.

There’s so much there, so much to see & unpack. If it isn’t obvious to you, this is something I wish I could see again, because there’s just so much there.  No, I don’t think this is as earth-shaking as Betroffenheit¸ a work informed by the profound pain & despair that Young experienced due to personal loss. But there might be more virtuosity, more technical brilliance in the movement & interpretive responses to the text: Doug Letheren, Jermaine Spivey (especially strong for a couple of minutes near the end of the piece), Matthew Peacock, Rena Marumi, Ella Rothschild, David Raymond, Cindy Salgado (almost always a source of light & fun whenever she appeared), David Raymond and particularly the enigmatic Tiffany Tregarthen as the Revisor. While they did not speak everyone was profoundly eloquent in their moves in response to the words coming through the P.A. At times words are repeated over and over, becoming like verbal minimalist compositions, ceasing to mean anything but calmly underscoring the movements. There are many moments where some of us were laughing, yet others were still, spellbound.

I’m reminded of the Hamlet adaptation I saw so recently that employed American Sign Language, verging away from Shakespeare into physical analogues to words, while reminding us of how difficult it is to be understood, how easy to be confused or mystified.

At a time when there’s a lot of good theatre on in this city, it’s easy to miss something good. Don’t miss Revisor. It’s one of the best shows I’ve seen this year.