I marked this one down on my calendar a long time ago, even though tonight on May 16th is a key date for other reasons…

I opted for the Toronto Symphony at Roy Thomson Hall because they were playing one of my favourite pieces conducted by Sir Andrew Davis (knowing I could see Shanawdithit next week), and they made me glad I chose them, one of the best concerts I’ve seen all year.

I understand that Sir Andrew is not just Interim Artistic Director of the TSO but is like a curator in assembling programs such as tonight’s, a fascinating combination:

But as Davis & the Toronto Symphony await the new conductor Gustavo Gimeno who will take over from Davis in the fall of 2020, they’re not just marking time. Oh no. This is an orchestra playing with passion & commitment, as Davis prepares them for the new regime. I’m eager to hear Gimeno who will be conducting in June, but for now this is an ensemble building for the future. 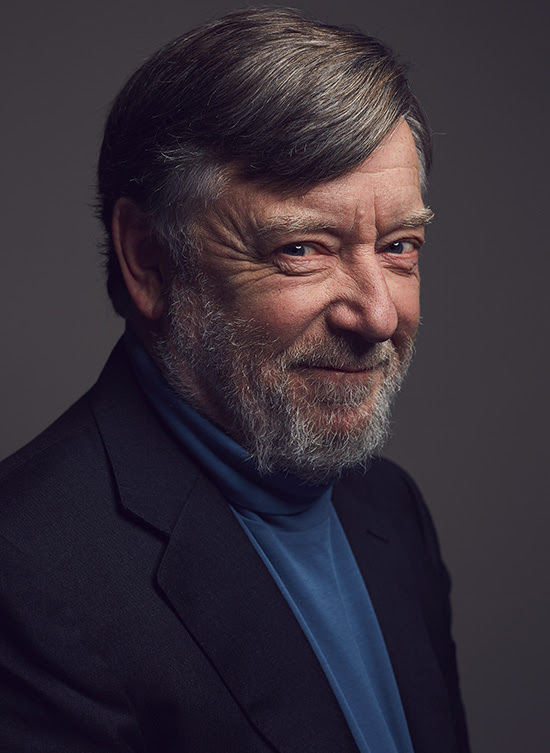 Perhaps I should explain why I was fascinated by Davis putting the Franck with Mahler. While the Franck is shorter & requiring fewer players than the Mahler, they sound good together. Although the Mahler begins in B minor its opening motto begins with an F-sharp, the same key as the Franck; if one recalls old-fashioned key relationships found in classical symphonies, this one works nicely.

I was reminded of the conductor of the la boheme seen at the COC lately. Should a conductor be noticed? Should the music flow without interruption? should we be aware of the soloists? I only bring this up because I was yanked out of the dramatic illusion at the opera a few times by a conductor imposing his ego on the natural flow of the piece, which is not how I like it. Sometimes singers or soloists ostentatiously seem to call attention to themselves by altering a tempo, by disrupting the natural flow, and if they sing well we’ll forgive them. I heard an ideal reading of the Franck tonight from Davis and pianist Louis Lortie, seemingly effortless in the give & take. Franck segments the piece in places with changes from one sort of playing to another, from one kind of texture to another sound altogether. I’ve heard it many times, and often the pianist calls attention to themself in their solo work, interrupting the flow in their struggles to cope with the score. But Lortie and Davis were so seamless I was reminded of the self-effacing approach of a film-score. They say if you’re doing it right, you don’t notice the music. On this occasion Davis & Lortie made it seem easy, even though this is a deceptively tough score. Lortie’s flow never stopped the continuity of the piece nor slowed the luscious flow of notes from orchestra & piano, as though the soloist were just another player in the orchestra, not demanding anyone shine a spotlight on him. When I say “ideal” I mean that this is the best version I’ve ever heard in decades of marveling at this beautiful piece, no ego to mar the performance. I feel lucky to have been seated in a place where I could see the wonderful eye contact & communication between Davis & Lortie. 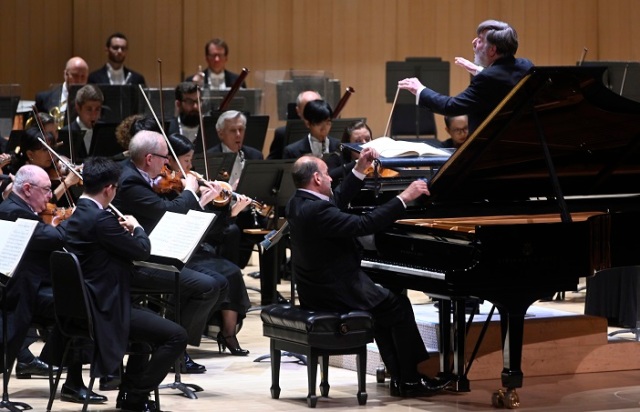 Louis Lortie at the piano, Andrew Davis at the podium and the Toronto Symphony (photo: Jag Gundu)

You’d think they’ve done this before, wouldn’t you…

And then on to the Mahler. I’m reminded of a TSO concert at Ontario Place back in 1980, where they also played the 7th Symphony. (can’t recall the conductor …. Hm could it also have been Davis?!). I remember that I ran into Carl Morey & Neil Crory, who both were dubious about this symphony; perhaps it was the scholarly consensus at the time? but they claimed the piece didn’t work.

Or was it that as of 1980, interpreters hadn’t yet figured it out? I had a recording I loved. I remember disagreeing with them at the time, loving this symphony in the slow version I had, conducted by Otto Klemperer. I’m much happier with quicker versions such as the Leonard Bernstein NY Philharmonic recording, that goes more like a bat out of hell.

Davis? Ah, now we’re talking. The TSO have done Mahler over the past few years, and there’s a world of difference when someone comes who really has some ideas about how to do the work. What a joy watching this performance, hearing the orchestra respond to an experienced leader with a real vision of the work.

While Davis is not as quick as Bernstein he’s at the quicker end of the spectrum: which I think is preferable. The marching rhythms in the 1st movement cohere better if you push the orchestra, especially if you really seem to know what you’re asking for. When we had something schmaltzy or more introspective, Davis pulled back on the throttle, allowing a kind of meandering for those softer spots. And that made the climactic passages that much more dramatic, the last of the 1st movement being especially relentless.

I’ve seen Davis do this before, in the February Wagner concert where he demanded clean attacks, shorter notes with spaces between them to help articulation. Not only did this give us clarity but likely helped save the players’ chops, and spared our ears as well. The key passages were wonderfully big but that’s preferable than being loud all the way through.

This orchestra really seems to love playing for Davis, given their commitment tonight. And yet it wasn’t all big and bold. There was a great deal of internal detail, many beautiful solos throughout the orchestra in every movement. And the last movement was allowed to meander a bit without being rushed the way some conductors do it, so that when we finally came to the big statements at the end, there was some genuine excitement.

I’m sorry I can’t tell you to see it again, this was the second of two. But Davis & Lortie are back next week in another TSO program that includes Rossini’s William Tell overture, Saint-Saëns’s Piano Concerto No. 4 and Respighi’s Pines of Rome.