Posted on November 9, 2019 by barczablog

While eight singers may have been drinking eight drinks at 8:00 pm on November 8th no one ate much of anything.

At first I just thought it was a fun exercise, an excuse for a bunch of young people to have some fun flouting the rules & conventions that have applied to the older generation.

Tongue in Cheek Productions have already laid waste to a few rules along the way, while entertaining many of us here in Toronto. Little did I expect that I’d be confronted with so many profound questions along the way.

Performance is often an exercise in control, a demonstration of skill if not outright mastery. You learn lines, music, perhaps some dance-steps, and need to do all that precisely in time to the music.

Now what happens if you have a drink? Or several drinks..!? Does the performance improve or maybe get clumsier? Does alcohol perhaps help put you in touch with something, stripping away a phony veneer to expose the beating heart underneath?

Before the concert I perused the menu of 8 drinks, and grabbed my single drink knowing I’d be sober by the end. Hm, the menu was pretty interesting even before we saw it interfaced with each of the singers.

I had the Butterbeer

Eight times we watched some version of that question (what happens if you have a drink?!) enacted for us, but different each time, not just because of the different drinks & performers involved. Each time pianist Trevor Chartrand came along for the ride, sometimes even getting a sip for himself.

Some music sounds better with a drink, some artists improve after a swig or two.

First:
Michael Nyby baritone under the influence of a Manhattan gave us three songs by Cole Porter.

Michael isn’t just a singer. He’s also one of the two artistic directors of Tongue in Cheek as you’ll recall from their interview.

He was pouring drinks a few seconds before he started to sing. 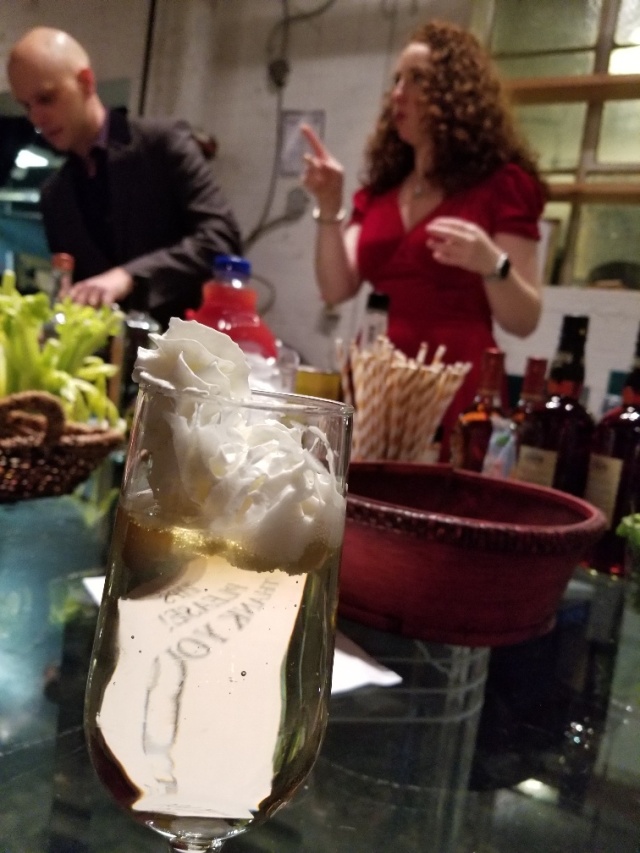 That’s my drink in the foreground, while Michael of Tongue in Cheek & Rachel of Opera 5 serve drinks to us… before later singing.

Aha no wonder that he sounded more relaxed in his third song “It’s De-Lovely”: when he had consumed most of his Manhattan. And the fun in the song shone through.

Second:
Beste Kalender, mezzo-soprano took us in a baroque direction with the help of a Caesar, apt for arias from Handel. As we watched her boldly consume more than expected en route to her da capo in each aria, I couldn’t help noticing. Sure, a baroque da capo is exciting, when you repeat the original tune, but dressed up with extra notes & effects. But I never realized how passionate that can seem, how it’s as though the original emotion has exploded to another level, as though (duh…) you had just chugged a bunch of alcohol. Scary as this must have been to explore and perhaps to execute, we were taken deeper into the essence of the aria each time.

I didn’t expect that.

Third:
Sonya Harper Nyby brought us unexpectedly into contact with another side of the music. Her French singing was delicate and sensitive, beginning with Viardot’s impressive vocalization of Chopin, then a delicate taste of Chaminade, concluding with a stunning bit of Fauré.

They were setting us up.

Fourth:
Again we went in a new direction, or perhaps more properly, an old direction. Ryan Downey & Screech took us in the direction of authenticity, arrangements of folk music without pretense. I was impressed as much by Downey’s readiness to consume Screech as by his delivery of a series of stunning songs taking us to the root of the musical impulse. For someone like me, who’s often agnostic about classical music and its failure to connect with people, this was a tonic, although no I didn’t drink any screech (not a good idea if you’re driving home alas alack).

We were at intermission, as many rushed up to get another drink.

Fifth:
Tenor River Guard sang songs from the realm of Broadway. These were for me the most impressive performances of the night, not least because I don’t know the artist nor do I know the latter two songs he sang. You know you’re enjoying a performance when you’re not second guessing the performance, but rather eating it up while thinking “wow that’s a great song”. Guard used every nuance and wrinkle in his voice.

He has a lovely sound but is especially a wonderful actor. I’m going to keep my eyes open because I expect great thing from him.

Sixth:
Aaron Durand, the other AD of Tongue in Cheek brought us songs with a connection to magic, while drinking the drink I had grabbed, namely the “Butterbeer”, apparently from Harry Potter’s world. What a fascinating trio he sang. He began with the impossible discipline of “My Name Is John Wellington Wells” sung at a bat-out-of-hell pace.

I was worried he’d be undone by the alcohol. Don’t drink Aaron!

Whew. But he did, and then segued into a romantic Warlock song. He gave us something intensely personal to conclude, including the first tentative thoughts about a new creative venture, and a song too…If performers are understood as advocates for the music they sing, somewhere Ralph Vaughan Williams is smiling.

Seventh:
Rachel Krehm didn’t make it to the fourth song of the Four Last Songs, which is “in the evening”. That – I believe—is why they called her set of the first 3 songs “Death in the Afternoon”. The whole time she was confronted by Absinthe, a drink with fatal associations.

No wonder she hesitated to take the fatal drink.

And by the way, Rachel will sing all four of the songs next time with orchestra as part of the program on Monday November 25, 2019 at Christ Church Deer Park in Toronto to benefit St. Michael’s Hospital (click for more info).

Eighth:
Mezzo-soprano Catherine Daniel gave us another way to think of drink & song, in a bravura reading of Cincos Canciones Negras by Xavier Montsalvatge. The songs are a broad array of emotions & sounds, sometimes tender, sometimes deadly, ultimately a celebration. I understand she’s performing next week on Wednesday November 13th in Kensington at 268 Augusta Avenue (a CD launch). From what I heard you’d be well advised to check out this rising young talent.

There we were in Gallery 345, Edward Epstein’s unique venue on Sorauren.  I knew I must be in the right place when I sat down and felt a curious sense of familiarity.

In Gallery 345 finding myself in front of a painting by Zoe Barcza (photo: Paul McKernan)

AND SO… once again Tongue in Cheek gave us something fun, something that breaks the usual template. It was new & fun & yes, a wonderful exploration of singing.  All of the singers had a fabulous opportunity to showcase their talent while the audience had a great time.

I can’t wait to see what they do next.