Although I haven’t seen many shows from Toronto Operetta Theatre, tonight’s is timely, after the social media debates between armchair Artistic Directors concerning management strategies. In the years to come we’re likely to see a scaling back of the boldest objectives, including a growing reliance on Canadian talent.

Meanwhile there are companies providing ongoing employment opportunities for Canadian talent, but on a much smaller scale than big companies such as the TSO or COC. TOT, whose Mikado premiered tonight, are one of the regular players on the Toronto scene. They play with a small orchestra in the intimate Jane Mallett Theatre, led by Derek Bate, who also conducts for the COC. Their productions have musical integrity, and a solid professionalism, directed by Guillermo Silva-Marin, who is also behind Opera in Concert and Summer Opera Lyric Theatre.

And speaking again as an armchair artistic director, tonight’s show likely works the same way that other seasonal favourites can work to regenerate fiscal health. The National Ballet have Nutcracker, Lyric Opera of Chicago are presenting Hansel and Gretel while the Metropolitan offer their shortened version of The Magic Flute. Oh and speaking of the TSO, they have their Messiah, as do Tafelmusik. The Mikado can work the same, way: as a wonderful play full of funny lines, familiar tunes, and a timely infusion of cash as well. 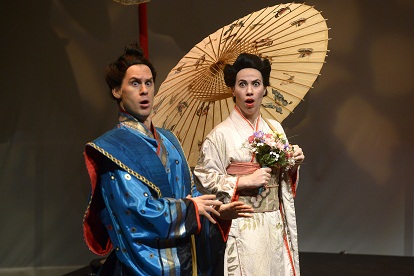 Adrian Kramer as Nanki-Poo and Lucia Cesaroni as Yum-Yum

And why not? As the leads Adrian Kramer and Lucia Cesaroni are an attractive couple with lovely voices, a pleasure to hear and see. This isn’t to be mistaken for one of the Stratford productions of Gilbert & Sullivan, where both the verbal skills & musicianship are flawless. But the singing is almost all excellent, the acting is at times charming and funny, with the occasional flash of inspiration. We only came fully to life when the girls showed up –a bit more like a chick flick than G & S—bringing the energy level higher. The young women show more energy than the men as a whole, possibly because of a holiday season opening before a very well-fed & passive audience.

And speaking of Canadian talent  TOT will be premiering a new operetta adaptation of Wilde’s The Importance of Being Earnest by Eugene Benson and Victor Davies in April 2015.  Artistic Director Silva-Marin and TOT are to be commended.

But this week there’s the irresistible fun and beautiful melody of The Mikado. TOT present Gilbert & Sullivan’s Mikado until January 4th 2015.