Yesterday I was on the University of Western Ontario campus, attending a special performance of Lee Hoiby’s The Italian Lesson in a production from Diva Lounge Productions.  UWO welcomed back alumnae Sonja Gustafson (soprano & Diva Lounge founder) and Tanya Ellis (pianist), in a remount of a show seen in the recent London Fringe Festival. 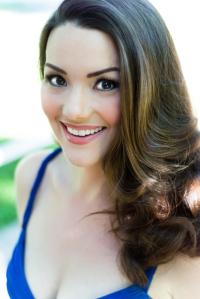 The Italian Lesson is an attempt to capture monologist Ruth Draper.  The words belong to Draper, famous for her flamboyant one-woman shows in the first half of the 20th century.  Hoiby set a text organized by Mark Shulgasser, even if the words of the libretto are Draper’s rather than Shulgasser’s; the “libretto” credit is Shulgasser’s even if he is self-effacing about his role.

The piano part is like nothing I’ve ever heard.  I want to make an analogy about the relationship between the voice(s) & the piano part, thinking of this as a kind of sonic canvas upon which composers paint operas.  I’d usually think of the orchestra –or our virtual impression of the orchestra via a piano arrangement—as representing the background, perhaps giving us the horizon line for a portrait painting, or the three-dimensional microcosm that encloses the voices.  Normally we expect the orchestra to hit notes both higher and lower than the voice, playing both before and after entries of voices.  Usually it’s an unequal comparison, the voice being like a boat or a swimmer afloat in a larger body such as a lake or ocean, sometimes overwhelmed by the power of that larger body.

That’s not what Hoiby did in this case, not by a long shot.  While it’s true that the piano begins & ends the piece, the balance is much more equal than usual.  Ellis’ piano is so understated that at times her notes are like a thin cracker almost imperceptible under Gustafson’s hors d’oeuvre spread on top.  The monodrama is truly the whole show.  Hoiby knew what he was doing.  The effect is that the voice –which is to say, the monologist— seems to be the creator of the monologue, her sentences emerging as distinct musical thoughts: as you’d hope.  It’s a remarkable achievement because we’re not aware of the presence of a composer’s ego (or style, which is more or less the same thing) in the music, interposed like an unwelcome presence via ostentatious writing.   No.  Hoiby creates a delicate texture that is just enough to shape a musical characterization of Draper, but always puts the monologist front and centre of the stage and all over the score.

I found myself swept up in the work & its texture, as much in awe of the elegance of the writing as I was enthralled by the light textures between Gustafson & Ellis.  One has to wonder in the presence of a new work whether what one is encountering is really in the text or might be due to interpretive choices from the artists.  The freedom with which they worked had me wondering about the way the score is notated, particularly whether the text encourages a piacere attacks.  The spontaneity in Gustafson’s performance and Ellis’ effortless following had me wondering if this was all in Hoiby’s score or something of their own.

Whatever the origin of the effect, whoever is responsible (likely all four: composer, librettist, singer & pianist) I believe Draper is well-served.

Shulgasser may have been addressing this sense of fluidity & freedom in a remark he made in our recent interview:

“The Italian Lesson” is certainly a very niche-y piece and perfect for the kind of singer that Sonja Gustafson is, who blurs the border between cabaret and opera. (I can’t actually remember when it was last done with orchestra.)

The piece and the artist are a good match.

Hoiby’s score seems to suggest that Draper’s persona is really multiple personalities, a series of voices that show different aspects of this woman, as she puts on different masks.  Gustafson literally sings with a few different timbres, teasing us with several colours.  Sometimes she’s doing something more like sprechstimme, sometimes it’s a bit of a croon, sometimes the line is from a pop-singer, sometimes fuller & boldly operatic. The colours are sometimes light, sometimes dark, and everything in between.

I’m hoping the project was recorded.

In the meantime –and this has no connection to Diva Lounge or Gustafson / Ellis—Shulgasser also told me of an uncoming New York production of The Italian Lesson December 6-8, by Darynn Zimmer, accompanied by Ted Taylor, directed by Beth Greenberg. (http://eastharlempresents.org).

I’m delighted,  This is a work deserving to be heard.