This was my third look at the Canadian Opera Company Barber of Seville but through a very particular lens.

Each season the COC gives over one of their performances to their Ensemble Studio, the talented young singers who are serving a brief apprenticeship with the company before launching their careers.  The Barber we saw tonight was a very special performance.  The energy in the theatre is completely different, the vibrant electricity of youth.  They will attempt everything that a director asks with a commitment you will not see from seasoned professionals. Each of them had at least one scary moment with the orchestra, as conductor Rory Macdonald seemed to welcome them to the big leagues, thinking of the way experienced pitchers will welcome rookies with a pitch that narrowly misses your head.  But instead of aiming a fastball at their ear, Macdonald merely aimed a full orchestra at them playing very fast, with no mercy for those who dragged or missed their cue.  Each of the soloists had at least a momentary misconnection with Macdonald, possibly because the conductor had been accustomed to racing through his Rossini with the other casts (who had weeks to get accustomed to Madonald, not just a few hours) like a bat out of hell, and was not going to adjust for the youngsters suddenly impersonating Rosina, Almaviva, Figaro, Bartolo, or Basilio.  Yet each in turn made their adjustments, showing that they were indeed ready for prime time.

This was a brave bold performance, and as seen in previous ensemble performances, at times more adventurous than the regular cast.  Both of the young Ensemble tenors—Andrew Haji in Act I and  Jean-Philippe Fortier-Lazure in Act II—dared to hit a high C (which the other tenor in the show did not attempt), even if they also cracked at least one note.   Yet these two were probably the voices that had the closest match to what Rossini likely would have wanted.  But while one cannot expect every voice to be a perfect match, everyone threw themselves into the physical comedy, the requirements of the singing and the characterization.  It was surely a valuable learning experience.   Iain MacNeil seemed accomplished beyond his years, brilliant a few days ago in the noon-hour sample (as duly noted), but that much more confident with costume & orchestra, and a big repertoire of different voices & facial expressions.  Bass-baritone Gordon Bintner was a deadpan Basilio (getting a very different sort of laugh than what I saw from the other cast, with his “La calunnia ” or in the wonderfully tight quartet “Buona sera”).  Charlotte Burrage had several lovely moments, both vocally and dramatically.  Clarence Frazer was willing to attempt a few amusing effects not seen from the regular cast Figaro.  And Karine Boucher seems to have a genuine flair for comedy, making the most interesting expression as she tipped us off that it was time for her aria, ostentatiously stepping into the spotlight. 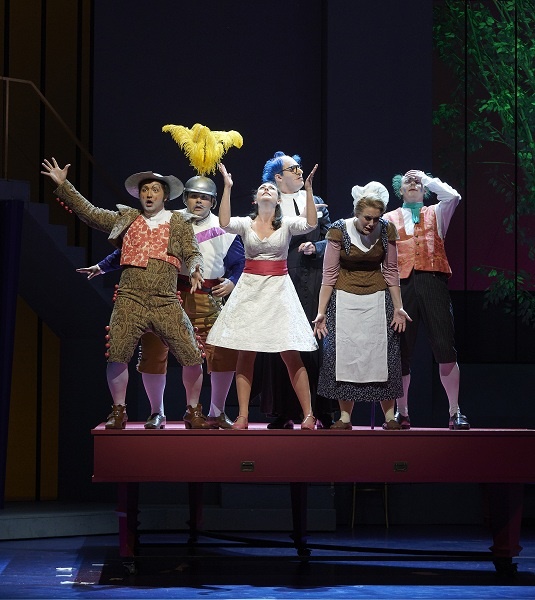 I think I saw much in this version that seemed to validate the production, as though the willingness of the young singers to take direction means that we got a better look at what director Joan Font actually wanted.  The busy troupe of extras & chorus meshed beautifully with the energetic ensemble in a way that I did not see in either of the previous performances I attended.  I had the impression previously that the occasional dumb-show of extras (for example in arias from Basilio and Berta) upstaged the singers, whereas tonight there was a much better chemistry.

Or maybe I am finally getting it.

The COC spring season is into its final week, with performances of the Lepage double bill (Bluebeard and Erwartung) and Barber.  This seems like the logical time for the Ensemble Studio performance, a bit like the convocations we see at universities around this time of year, followed by a summer holiday.  They have earned their rest.

2 Responses to Ensemble Barber an initiation