The morning after the end of the world feels pretty good, especially if you’re one of the little people and not one of the old gods swept aside. 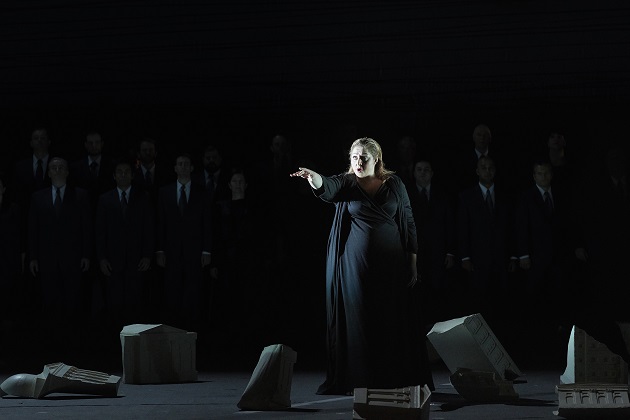 I am not Barack or Hillary, just one of the little people who can’t stop reading tweets and CNN, WaPo and NY Times, fascinated by the unfolding conflicts between the great & powerful forces on either side. I found solace immersing myself in the Canadian Opera Company’s Götterdämmerung, one of many templates where I could watch my own story unfold. In this production, does Hagen remind you of a more manly and handsome Steve Bannon, as he commands the vassals, in support of Gunther, the corrupt CEO figurehead? And does it matter whether the fraud and fakery come from a potion, the tarnhelm or Spicer, Conway and alternative facts? Truth is stranger than opera.

I saw the first and last performances, fascinated by how it changed since its Groundhog Day opening. On that occasion there were unfortunately empty seats as the last act began, perhaps daunted by the length of the show. Last night was a different story, the most intense audience response I’ve heard in Toronto in many years. Suddenly it was as though everybody in the house had bought their tickets from a scalper, had a personal stake in the show: and nobody left early. I’ve never heard such a wave of yelling and bravos in this city, both in response to the principals and to the orchestra, who were brought onstage for the applause.

Everyone seemed much more comfortable this time, less nervous than on the opening night.

Johannes Debus is still a young conductor, which might be the reason Toronto basks in the riches of his performances with the COC.

I’ve enjoyed watching his first encounters with great scores over the past few years, getting impossibly polished performances from the COC orchestra. One of the great joys of my 2nd row seat is watching Debus lead the COC orchestra, the chorus and soloists through each opera, immersed in an orchestral sound that can make it challenging to hear the singers (and the worst place to assess voices). But I had a perplexing time last night, struggling to see the first downbeat of each act due to a front row all leaning forward rather than the usual mix of interest and apathy. Even so I managed to find him for key moments. At the end of the first of the three sunrise sequences, he’s singing that opening brass salvo in E-flat that greets Siegfried & Brunnhilde as they enter in the Prologue. He’s faithfully probing the drama of that lengthy interlude between Hagen’s watch and the scene back on the rocks with Brunnhilde, as the drama of the hero’s forgetfulness is laid out for us in the orchestra. He appears to be launching an army into battle as the vassals respond to Hagen and the immense sound thrown back and forth, and again, on a more intimate scale, in the plotting between Gunther, Hagen and Brunnhilde that brings Act II to its perplexing & ironic conclusion. After all the powerful moments, Act III offers a lyrical respite, a resting place both for our ears and the wind-players’ chops in the delicacy of the Rhine-maidens scene and Siegfried’s reminiscences from the forest-bird, before Debus turns them loose in the full catharsis of the funeral music for Siegfried.

Christine Goerke is in some ways every bit as young as Debus. As he has conducted his very first Walküre (2015), Siegfried (2016) and now Götterdämmerung, she assayed the role of Brunnhilde with us in Toronto for the very first time in each of those Ring operas. Sitting up close gives me the privilege to see the performer coping, the wheels turning, responding. Sometimes you see a singer trip over a hem, (as we saw just last month ) or struggle with a messy stage (as she and Heidi Melton did with the Walküre set). I am a bit of a sucker for histrionics and drama, which means that if I find one singer doing more than the other, I’ll lock in on that one. It meant that for the scene between Waltraute and Brunnhilde, I watched Goerke even when Karen Cargill was singing, as there is a huge amount of drama enacted on the stage of Brunnhilde’s face. She begins, believing that this visit is good news. But we get all sorts of nuances I haven’t seen before, some anguished, some triumphant, and overall, quite unlike what I’m accustomed to in this scene. I’m not sure if the part that excited me most (and left me staring through a mini-Niagara Falls down my cheeks) was there the first time, as I’m pretty sure I was watching Cargill last time, whereas this time I watched Goerke go all to pieces during Cargill’s narration (and I followed suit: monkey see monkey do).

There was a nagging question that emerged with the force of a revelation with Brunnhilde’s re-appearance upstage, at the climax of the opera, namely “but where have I heard this sound before”? It crystalized a short while later in her clear and confident singing of the commands “starke scheite schichtet mir dort” that begin the Immolation Scene. The dark colour here sounded more than a bit like the great American soprano Jessye Norman, or perhaps like Helen Traubel (another great American) except there was none of that tendency both Norman & Traubel displayed, that the voice often sang a fraction of a tone flat throughout the entire range. Rich tone like Norman or perhaps Traubel: but precisely on pitch. Where there had been some humble caution on opening night, in the closing performance she seemed to lose herself completely in Brunnhilde, a rich warm portrayal that seemed so easy and natural that there was no longer any question of whether she could handle the role. There’s voice to spare, as it’s clear that Goerke really owns this role. Next time she’ll be able to build on this experience, adding additional richness to a portrayal (or should I call it portrayals? Three very different parts actually) that is already the most profound Brunnhilde I’ve ever seen. She’s not just singing, she’s acting and reacting.

Andreas Schager gave us a Siegfried to put me in mind of the challenges of this role. Few tenors can sing all the high notes in the role, let alone sing them with such a ringing tone that you always hear him cut through the orchestra. Once you have the person with the voice, it’s a bonus if the tenor looks halfway heroic in his physique, while offering a convincing portrayal. In this respect Schager is a genuine triple threat, in his attractive look and powerful sound. Having seen him twice, I was intrigued that he seemed to be free-lancing a bit more on closing night, singing notes that weren’t notated, while appearing to have a whale of a good time. He brought a wonderful swagger to the part, but there was a bit of Danny Zuko preening in his leather jacket before he sings “Summer Lovin’”, that might be some of the reason I found him unsympathetic. I’ve seen productions where the Siegfried stares at Brunnhilde in Act II with true innocence and without any apparent guile, whereas this interpretation brings out a sneaky conspiratorial side, as for instance in the tete-a-tete with Gunther. Maybe that explains why I wasn’t as upset as usual, at his demise, left without any sense of tragedy or loss in his murder.

Ain Anger as Hagen presented us with one of the other rock solid elements in this production. Along with Robert Pomakov as Alberich, Hagen was that most curious phenomenon, the portrayal that seemed so absolutely timeless, that it fit the modern production while seeming to be the enactment of the role as Wagner wrote it.

Anger & Pomakov are in modern dress, but informed by the ageless obsessions ruling their envy and hatred. While Anger has the vocal credentials to offer up the black bass sounds of a Greindl or a Frick, he scaled it back for most of the portrayal, giving us the subtleties you see in Karl Ridderbusch’s quicksilver Hagen on the von Karajan Ring. The advantage of this approach onstage is that we see a Hagen who –like a good Iago—can be trusted by those around him, and whose villainy is well concealed rather than so obvious as to make everyone else on stage look foolish (for having trusted such an obvious bad guy).

Martin Gantner and Ileana Montalbetti present us with the unfulfilled brother and sister Gunther & Gutrune, proof that money can’t buy love or happiness. Gantner presents a figure all too familiar to us from television, a man conflicted & compromised, tormented by his awareness of his weaknesses. Montalbetti sounded much better tonight (perhaps she was unwell on the opening?), in a part that does see some growth; unlike her brother she has the one genuine moment of heart-breaking recognition in the last scene.

As the show is now closed I can mutter a few comments that may sound like complaints under my breath. Does it make sense that Brunnhilde has wine on her table on her mountain? Presumably one of the amazon drones delivered it, as no human can get through the impenetrable fire that tends to disrupt her social calendar. When Brunnhilde thinks Siegfried has come back (Act I) I think it’s adorable that someone (Goerke?) believes the Valkyrie-turned-human would tidy her table: because her man has come home. And then when Siegfried-as-Gunther turns the table upside down, and the wine and glasses go flying how is it that after all that, he picks up a plastic glass and sips more wine? But I suppose in this realm of fluorescent lights, ties & office furniture, we accept that the glasses are really plastic and therefore as immortal as Grane.

And now, what? Cast-members fly off to gigs elsewhere and/or back to waiting families. In their spring season the COC offer Tosca and Louis Riel. Next season we take a bit of a break from Wagner. And in the meantime the tunes continue to play inside my head.