The title must seem like a joke, strangely redundant.  How could that even be a question for study, you may wonder.

But singing is not just a vehicle, but also sometimes a primary concern of the opera.  Some operas take us backstage (as some plays do), while others simply insist that we notice that the characters onstage in the opera are singing.  And some, particularly the various incarnations of Orpheus, the immortal singer, are brilliant experiments with the form. 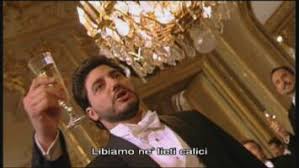 I’ve been conflicted about that from the first time I saw such a thing.  There we are in Act I of  La Traviata, when we have a drinking song.  But what precisely were they all doing before the drinking song?  Is it more realistic for an operatic personage such as Alfredo Germont to break into song, or less?  I can’t decide, but it’s a little bit like reminding you of your breathing; you may suddenly become self-conscious about a process that you didn’t notice before that.

When the transition isn’t quite so obvious, as in the Te Deum that concludes Act I of Tosca, the effect can be quite powerful; indeed, Puccini seems to anticipate the cinema in the power of this moment.

In film, scholars sometimes sub-divide the ways music is employed into two mutually-exclusive groups.  Observe the following example (click on it below, but FIRST read this synopsis):

It’s not quite the same in live theatre, but even there we have a similar sort of dichotomy at work. When the singing is part of the artifice—as in almost all operas—we are more inclined to critique the skill of that portrayal, noticing the singer as a virtuoso.  Diegetic music has a different kind of reality.  Whether the singer performs skilfully or not, we must accept the legitimacy of the performance, as it is part of the world being portrayed.

Diegetic music occurs in opera as well.  Two of Wagner’s operas  — Tannhaüser  and Die Meistersinger –include  singing competitions, whereby performance onstage is deconstructed as a display of virtuosity.  We don’t listen with the same judgmental ear, because the singers are playing singers.

Perhaps the reason Orpheus has been portrayed in so many operas is because of this dynamic.  Two of the very first operas –Peri’s Euridice and Monteverdi’s Orfeo—bring us the story of the great mythological singer.

Gluck’s Orfeo ed Euridice is considered a “reform opera,” which is another way of saying that Gluck broke away from the usual style of his time in search of something simpler and more eloquent.   Rightly or wrongly, I understood that Gluck and his librettist Calzabigi sought to go back to the very wellspring of opera, in reviving one of the original operatic figures, namely Orpheus.  By returning to this immortal theme, they signalled a new beginning, and a neoclassical purity.

You may know some of the famous music from this opera.  The Dance of the Blessed Spirits is the most well known orchestral passage, while Orfeo’s big aria “che faro senza Euridice” is probably the vocal highlight.

But for me the most powerful moment in the opera is the confrontation between Orfeo and the Furies, a moment that is breath-takingly new.  In the economical exchange between the pleading Orfeo and the implacable Furies, we hear a gradual softening, as music stills the savage breasts.

Never had music been shown to be so powerful.  The furies become less furious and more musical, in spite of themselves (here’s a second slightly different take on the same scene).

I am looking forward to seeing what Robert Carsen does with Gluck’s opera at the upcoming production from the Canadian Opera Company, May 8 – 28 at the Four Seasons Centre.

This entry was posted in Essays. Bookmark the permalink.