I’m going a bit outside my usual comfort zone with this one.  I’m a composer & keyboardist, a scholar in opera, theatre, film-music, literature.  In grade six they already knew I couldn’t paint or draw.

Thank God for computers, because I was given a second chance at (artistic) life playing with cameras, graphics and web design.  Even so, I could never be mistaken for an artist, and I have never been fooled about my capabilities.

Some artists create work that is so completely original that one wants to create a separate category for their art.  For writers or composers we speak of their “voice”.   The authentic idiom or language of a choreographer is in movement.  For a composer it’s sound.  For a painter?  Ha, I think it’s silly that I want to call it a “voice”, but it’s just that I tend to relate so much to music that I even think of painting as having a rhetoric and a sound and a language, and that the painter is “speaking”.  There’s probably a better word for it that art scholars would know.

So let me return to what I was saying about personal style. I have been thinking about the original vision unique to particular artists.  Nevermind whether it’s a voice or a language or a series of signifiers that recur in the work of that artist. 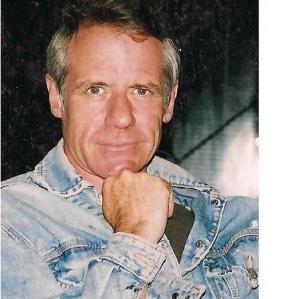 I am writing this piece with its big preamble because I have been moved  by the works of Brian Wyers.  I am intrigued by his paintings even if at the same time, underlying such questions are my own concerns and questions.  As much as I may think I am looking at someone else, I am really looking in a kind of distorting mirror, another way to see myself.  I hope Brian’s okay with what I say.

I first saw Wyer’s work in a gallery in Coldwater Ontario.  The walls were covered with a series of big powerful canvases.  Nowadays when I see an artist seizing a space with powerful work I try to understand what they’re doing; but on this occasion I think I was a bit threatened by how self-assured it all seemed.  Although the gallery in question is a very large space, these paintings managed to fill the room with their vibrant images.  On one wall were flowers, beautiful colours…

One reason I wanted to ponder that question of unique artistic vision is because of the following painting.  It reminds of something Georgia O’Keeffe, the great American painter of flowers, might have created.   Now of course I have never seen her works in person, only in books.  Not only is the picture in question big but 100% of the painting is a portion of the flower.  It’s so indecently, pornographically close up that one almost expects the painting to have a scent.  It’s substantially different from what O’Keeffe painted in several ways, but I have to invoke the earlier painter as I process Wyers through the lens of the great American floral painter, a natural reference point in this instance. The title of this work is “Adoration”.  To be close to this painting is to be challenged by its beauty.  How can one look at it and not adore?  If you have eyes you will be seduced.  It’s size makes a noncommittal response impossible.

On another wall in that gallery in Coldwater, I was particularly struck by a large canvas that caught something totally magical, a picture of a fish, the water glinting.  Under the surface?  There was some sort of machinery.  Upon closer inspection I saw a bicycle.  It seemed so odd.

Only later (months later, when I had my second encounter with this wacky painting) would I make sense of the painting and come to understand its subtext.  I understand it’s Gloria Steinem who said

A woman without a man is like a  fish without a  bicycle. 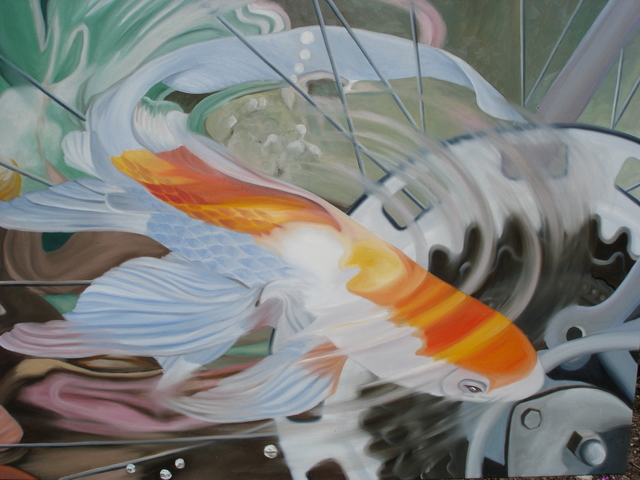 a woman without a man is like a fish without a bicycle: by Brian Wyers

It’s a really big canvas.  The power of this work doesn’t really come across in an electronic medium.  In person – bicycle or fish—they’re different because they’re much bigger and more impactful.  The koi in the picture is gloriously large, an astonishing three feet in size (although from my research I am assured that koi can in fact grow that big), a bright swath of orange dominating the room, in spite of the sweetness of its –dare I say it?—feminine facial expression.  The pathetic bicycle destroyed in its aquatic setting?  Ha, I can’t help but see that as the masculine part of the painting.  And it’s not so absurd if we follow Steinem’s ratio (woman: man = fish: bicycle).  Yes, the sexy fish is the woman, and the ridiculous wrecked bicycle is the man.   Speaking as a heterosexual man, I can’t help but think that sometimes that’s exactly how it works, that man is as subject to sabotage in the presence of femininity as a bicycle to the charms of wetness.  While one could also imagine a fish on the back of a bike in the air-breathing world: gasping for breath where the cycle is at ease.  But no, we’re instead in the piscine world, a place where bikes go to rust & die.

I can’t claim that all of Wyers works are as wacky.  But he does provoke my thoughts, and this painting isn’t the only one stirring the pot of my brain.  This is a picture of something that is beyond uncommon.  It’s not really surreal, so much as provisional, speculative, and as a result, poetic in an unusual way.  Discussing the images (both the big flower and the fish-bicycle painting) with my wife, who had been with me in that Coldwater Gallery, the word “absurd” came up.  She thought absurd isn’t a compliment and doesn’t really sound nice.  I was simply seeking the right word, and “absurd” works for me, in the sense of absurdist theatre, whose play on words & logic can be so powerful at times.   But I am not sure whether “absurdism” is perhaps too strong. “Whimsical” and “playful” might be better words.  His paintings seem to have irony or a kind of self-awareness.

I have to think about this some more.  I shall return to Wyers and his pictures, but this is enough for now.

Wyers art can be found in Ayrspace.ca –a group of painters showing in Ayr Ontario– and in Artspace in Oakville.