Ann and David Powell, aka Puppetmongers Theatre, have been delighting audiences for nearly 40 years with their extraordinary and innovative puppetry creations, fusing strong storytelling with their quirky sense of humour and technical wizardry.  At the forefront of puppetry arts in Canada, the award winning Puppetmongers have created 12 original shows for both young audiences and adults, and have toured extensively in North America, Europe and the Middle East.  They are 5 time recipients of Citations of Excellence from the Union Internationale de la Marionette,  and winners of both the Award for Excellence and the Presidents Award from the Puppeteers of America.  Closer to home, they are 2 time Chalmers Canadian Play award nominees at their productions have received 11 Dora Mavor Moore Award nominations.

Bits of both really, in looks and habits (both the good and the not so good). The family background is “British”, combining English, Scottish, Welsh, Cornish, maybe Irish and who knows what else.

2) What is the best thing / worst thing about what you do?

The best is that I get to play for a living. The worst is having to do all the business of Selling what we do to make that living.

Mostly I enjoy quiet, to be with my own thoughts and ideas. If I do choose music to listen to, I’m likely to choose something from the Renaissance or Baroque periods. When it comes to TV, I’ll watch anything that grabs my attention – a good movie, an interesting documentary on TVO, occasionally a series like 30 Rock…

A more retentive memory would be good.

5) When you’re just relaxing (and not working) what is your favourite thing to do?

I do enjoy baking. And reading. And having the time between sleep and awake to let my mind drift around problems and plans. 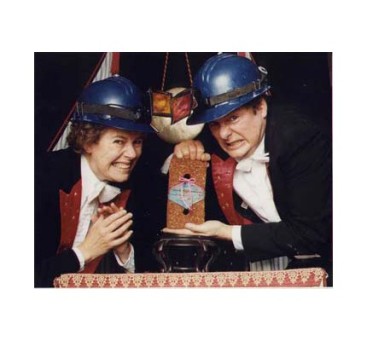 1) How does performing Brick Bros. Circus challenge you?

It’s up to us to persuade the audience to suspend their disbelief and see ordinary building bricks as the highly trained circus artistes they really are. It’s also a bit of a work-out as the bricks are quite heavy!

2) What do you love about the puppets you’ve created for Brick Bros. Circus and what you’ve written for them?

That we didn’t have to create puppets at all – friends volunteered bricks holding down jobs in their gardens and as doorstops, and auditioning trips to the local building yard keep us stocked with the rest.

The script is tongue-in-cheek circus banter, to invite the audience in on the silliness of the show – for which of course we had to attend a lot of circuses for research.

3) Do you have a favorite moment or section in Brick Bros. Circus?

That’ll partly depend on each audience’s reactions and response: if the audience is particularly enjoying an act, then it’s a lot of fun playing it up for them. I do though quite enjoy the wild brick in its cage…

4) How do you relate to Brick Bros. Circus as a modern brother/sister?

Modern, huh?! Some have said our work looks like we inherited it from our parents, that there’s something of an old fashioned sensibility about it. That said, this show that we built for fun more than 30 years ago is still opening audiences’ eyes to what else puppetry can be.

5) Is there an influence you’d care to name, a particular artist or an ensemble whose work you especially admire?

So many, in my getting-longer-every-year life – where to begin… Felix Mirbt was the first to open our minds to how much more puppets and puppetry can do and be in theatre. Theatre de Cuisine… Velo Theatre… Bruce Schwartz… Steve Hansen… amongst many.