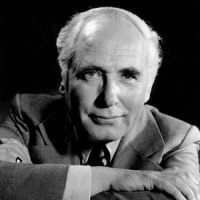 It reminds me of a time long ago, when I took a course taught by two giants at the Faculty of Music at the University of Toronto, namely Harvey Olnick & that very same Godfrey Ridout.  The current dean of the Faculty Don Mclean was also in the class, although I am certain he wouldn’t remember me.  I remember Don as the brightest student in the class.

I recall something Ridout said about Wagner that struck me as one of the most insightful things I’d ever encountered in a class, as if the professor understood the psychology of composition & performance.  Or so i felt at the time.

Ridout described how an orchestra might have played the “Ride of the Valkyries” in the 19th century.  Those quick runs would be ragged, discordant because of the mistakes the violinists would likely make in attempting to play those quick notes.  And I remember, almost as a footnote, his acknowledgment that nowadays violinists in any decent orchestra could play the piece without the raggedness Wagner must have heard, and indeed, expected when he wrote it. Here’s an older performance that might give a bit of an example of what Ridout meant.

Would he have expected musicians to master the piece a century later?  Perhaps.  Ridout was indeed suggesting a few things:

That all comes back to me now, courtesy of Stewart Goodyear.  I have been playing and listening to Beethoven piano sonatas all summer.  I am reminded of Ridout’s commentary on Wagner, when I think of Artur Schnabel, whose approach to several sonatas has a ragged wildness comparable to what Wagner might have experienced in his century, hearing the Ride of the Valkyries.  What indeed did Beethoven expect when he wrote these works?

It’s possible to play perfectly, especially if one doesn’t go as fast.  Playing with the unbridled passion of a Schnabel, however, leaves you open to the occasional fudged note.  I remember discussing certain pianists whose performance was fraught with this kind of thing.  Rudolph Serkin’s Emperor Concerto many years ago at the Toronto Symphony was the occasion for a kind of psychological test.  Those of us up in the balcony, seduced by Serkin’s mugging and posturing weren’t troubled by the notes he missed; whereas our friends on the orchestra floor –unable to see the histrionics—were fully aware of all the errors he was making.  I think the mystique of the romantic virtuoso included a modicum of errors that one forgave if the aura was sufficiently heady.

In each sonata Goodyear has the capacity to surprise even a jaded veteran like myself, someone who thinks he knows how the pieces should usually sound, and was sure he has heard it all before.

I think I can now say that the whole set –all 32 sonatas—is for all intents and purposes perfect.  But I’m not sure that playing a mistake-free cycle is the great achievement one might think.  To do so is tantamount to reciting the complete plays of Shakespeare correctly: a technically impressive feat, but not really art.  It’s what one does with the expression that matters, surely.

Each of those last sonatas illustrates the depths of Goodyear’s grasp of Beethoven.  I am waiting for the world to discover this set, even if there isn’t likely going to be the same paradigm-shifting excitement as the one that greeted Glenn Gould’s Goldberg Variations.

I’ve found each pianist seems to have an approach that in the best cases is more like vision or even a special genius.  Barenboim, whose playing is often slow and deliberate, is a man I have always admired since I first encountered his old TV series Barenboim on Beethoven on TVO when I was too young to have yet played those sonatas.  When I first tried out the “Waldstein”, it was with Barenboim’s analysis in my head, his demonstration of how the first subject –the repeated chords—rises while the second lyrical subject descends.  Barenboim had been my ideal.

I bought most of Schnabel’s old mono set, jumped at the chance to get Kuerti’s thrilling new set (or at least I bought it when it was still new), and listened to individual sonatas by many more players.  Recordings offer solutions to the problems we sometimes can’t solve when we sit down with a score.  And yet each of these pianists seems to characterize Beethoven with their own individual sound, their particular genius. This is as true for Glenn Gould (whose odd reading of the Op 14 #1 left me a bit mystified) as for Gavrilov (who seemed more genuinely at peace in the tortured first movement of Op 111 than in the calm second) or Ashkenazy (whose steady and un-mannered playing gave Beethoven much the same gravitas I found in Barenboim’s readings).

Underlying each of those readings is a drama enacted between the player and the work.  In the faster movements that means, making choices:

There might be another option.  Stewart Goodyear plays the fast passages with astonishing clarity, without being mechanical, and with every bit as much passion & expression as a Schnabel.  I get a rush several places from the exquisite clarity, the thoughtful management of the voices & the drama underlying every moment.  It’s as though the passionate Schnabel has been reincarnated as a muscular young Canadian, putting that passion into a physique executing note-perfect readings, the best of both worlds.  Instead of a struggle (recalling the analogy i made in the spring, describing the Beethoven Marathon, as climbing Everest), it’s as though we’re nearing the summit, and now blissfully above the clouds, in the clear air where the angels dwell.

The slow passages are soulful & subtle, crisply understated in a black comic vein that reminds me frankly of the detached touch of Gould playing Bach.  Goodyear never lingers over anything, never outstays his welcome in a passage with sentiment.   And his scherzi are riotously joyful, with all the boisterousness of Olympic track athletes out for a drink after winning a medal.

I looked for some sign that Goodyear was seeking to explore historically informed performance (HIP), in the spirit of Norrington or Gardner, but saw no mention of such issues in the liner notes. Wait, let’s have a bit of a digression and talk about those notes, which are an additional achievement from Goodyear, full of poetic descriptions of the sonatas (as you can see for yourself).

“I always saw the fourth movement as a dance of raindrops, a ballet depicting a windy shower. The constant triplet eighths notes representing the rain, the contrasts in dynamics representing the sudden shifts of the wind. The prestissimo is a medley of what we have experienced in this sonata. We had the dramatic first movement, the operatic second movement, the spook-fest third movement, and now the fourth movement gracefully melding everything. It is almost as if Beethoven is telling the listener: “Deal with it..I’m here. Now dance to my beat.”

So, to return to my HIP thought, I feel the same kind of loyalty to Goodyear’s readings as I do to those symphonic readings that burst free from the older conventions (whether we’re talking Norrington & Gardner, or even Mackerras & Bruggen), even though i don’t believe Goodyear was seeking any sort of authenticity in his readings.  I have been trying to reconcile myself to old favourites –Klemperer especially—who no longer move me as they once did.  Now this summer, Goodyear has changed the way I hear Beethoven’s sonatas, likely for years to come.

I am curious about his next undertaking.