A.J. Gray, aka Alison Gray, was born in England.  Parents with talents of their own encouraged an interest in the arts. 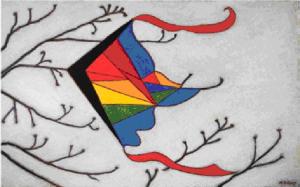 While it is still not clear which of these would have been most appropriate as an occupation, many years have been spent working on paper and canvas.  While Gray says, not without irony, that the work has always been documentary in nature, sometimes literally, as a landscape painting, hers is a poetic sensibility with an eye for beauty & meaning in everything.

She recounts how the desire to prove a point in a dispute over unnecessary noise prompted the purchase of a videocamera with some fairly good microphones built in.

It was almost inevitable that recording performances would be an attractive pursuit, and an interest in all kinds of music has led to the acquisition of peripherals that allow more sensitive recording of the audio track using strategically-placed condenser microphones.  Every kind of music, from large orchestras and opera to rock and roll, has been covered, along with theatre and dance productions.

At this relatively early stage in her career as the creator of documentary video I ask Gray 10 questions:  five about herself, and five about her videographic activities documenting performance.

1) Which of your parents do you resemble (what s your nationality / ethnic background)?

I was born in England, and both of my parents had a mix of English and Scottish ancestry.

AJ Gray, on the job

In my Dad’s case there was a little Welsh thrown in, and the part of Scotland that my maternal grandmother came from was probably invaded by Scandinavians. When I was a young adult, many of my parents’ friends would remark that I resembled my Dad. More recently, the people taking care of my Mum would say how alike we were.

2) what is the BEST thing / worst thing about video documentation?

The best thing is the addition of a fourth dimension, i.e., Time, to the ones I was already using. Outside of recording performances, some of the most interesting projects for me have been the ones in which the camera, trained on the sky, would be running for several hours. The resulting data can be edited down in all kinds of ways.

The worst thing would have to be the constraints about publishing. So much of the great material that I have recorded in the past few months is for archival purposes only, so I can’t put it out there, much as I’d love to. Then, in addition to the need to abide by the policies of the Musicians’ Union, there are other factors to consider. When minors are involved, it’s especially delicate and I prefer to err on the side of caution.

I’m a fan of opera, also love the ballet and have been known to attend shows by David Byrne and Randy Newman, and Lou Reed. I am still kicking myself for missing Paul Simon. Brazilian drumming and World Music in general have a lot of appeal for me.

It would be great to have skills in musical performance at a level that would permit playing with a group. It’s so wonderful to see the interactions between players who have been practising together for so long that all it takes is the movement of an eyeball to give a cue. I can’t think of many other human endeavours that create these kinds of relationships. Soccer might be one.

5) When you re just relaxing (and not working) what is your favorite thing to do?

For me, the 50 metre pool and the running “track” are where the best unwinding can happen. For sheer goofing off, it’s nice to get together with others and trade stories.

1) How does video documentation challenge you?

The challenges are usually only technical. In a club at close quarters there may not be anywhere to put a pair of mic stands, or it might be in a huge church with the performer moving from one end to the other. In such a case, a second pair of microphones would be helpful, meaning another 400 feet of XLR cable, a much more elaborate set-up. It can take as little as 20 minutes for me to have everything hooked up and ready to go. Sometimes it’s hard to find a place where the camera has a clear view of the performers. Flexibility is key.

2) what do you love about making documentary video?

I’ve barely scratched the surface of what it can do and am amazed sometimes. Once a battery ran out but the camera kept going for another 10 minutes anyway, thereby capturing the tail end of a great show that went on longer than expected. It was such a thrill to discover that nothing had been lost.

3) Do you have a favourite video that you’ve created?

A couple of my favourites are Night Falls and The 90th Annual Warriors’ Day Parade. Night Falls is a pretty early example where eight hours of video gets taken down to about five minutes. This was made before I’d figured out how to fiddle with the audio, so the editing is fairly arbitrary because I wanted certain sounds kept in.

The Warriors’ Day Parade video, from last year, is nearly half an hour long, also put up in installments as the editing progressed. There are some sweet and poignant moments, and Part One has a funny little sub-plot concerning a chap in a green shirt. My hope was to try and make it so that all of the participants (or their grandchildren) could see or hear themselves at some point in the video. It seemed a massive task, until compared with the sacrifices made by some of the Veterans in the parade.

4) How do you relate to video documentation as a modern woman?

As a modern woman? Since my little operation is fairly compact I can usually carry my own gear. There is still sometimes an odd vibe suggesting that I can’t possibly know what I’m doing because I’m not a guy, likely coming from someone even more old-fashioned than I am, so I try to be understanding about his or her perspective..

Whatever it may have to do with being a woman, modern or otherwise, there are always the options of asking for help or advice, and continuing formal education.  Being primarily a visual artist using a recording device that is primarily a camera, I know there is much to learn as far as the audio engineering is concerned. So I consult a long-time friend (John S. Gray) who has many years of experience recording performances.

5) Is there anyone out there who you particularly admire, and who has influenced you?

That list would run to several pages and it’s hard to know where to begin. In art school (Queen’s, BFA) in the 70s we had sessions with the film department, and one example we were shown was Wavelength by Michael Snow. It still stands up. Back in those days, making movies was prohibitively expensive and while I never dreamed I’d be doing what I’m doing today, having seen that film I wanted to.

Also, European cinema was starting to be available at some theatres in Toronto, so Truffaut, Fellini and Bergman, among others, had a big impact. Nowadays I’m way behind with my movie-viewing, hoping to catch Werner Herzog’s latest at some point. He never disappoints.

Paul Simon’s video for The Afterlife seems to me to be a beautiful example of what I’ve been aiming to do. It’s a very straightforward piece. The music, and the relationships that the musicians have with their instruments and each other, take precedence over special effects. It’s almost not so much a document about the music and performers as it is about the positive energy they create.

It’s nice to imagine that this energy increases whenever someone uploads a video of people making music and having a good time. The world can always use more so I’m happy to help.

AJ Gray’s work can be found on her youtube channel, or her Vimeo page.  If you’re an artist, band, or ensemble interested in video documentation you can email her at capabilitygray@gmail.com.