Topher and “The French Connection”

I couldn’t help understanding Topher Mokrzewski’s concert today at the Richard Bradshaw Auditorium (the intimate concert space in the upper lobby of the Four Seasons Centre) as a goodbye.  As is usual, the introduction told us a bit of the performer’s resume, but we were poignantly reminded that Topher’s moving up in the world.  The collaborative pianist, repetiteur & coach who worked on the COC’s Tristan und Isolde and who was again at the heart of musical matters with Opera Atelier’s Magic Flute that opened a few days ago, will be conductor of the Calgary Opera next season, and conducting a chamber ensemble in Against the Grain Theatre’s upcoming production Figaro’s Wedding, in a few short weeks.

Today? It was a very personal program of solo piano music, interspersing stunning 20th century classical piano masterpieces with jazz transcribed for solo piano.  The first triptych placed Mokrzewski’s paraphrase of Bill Evans’ “Peace Piece” between the first and eleventh of the Vingt regards sur l’enfant Jésus, underlining the jazziness of Messiaen, the classical purity of Evans, and the common ground they share:

Of course a big part of the connection was Topher’s, not just in leading us to the resemblances, but in the way he executed the pieces.  The dissonances one hears in some readings of the Vingt Regards don’t need to be emphasized, Topher opting to let those extra notes sound quietly, suggesting overtones without blurring the luscious melodic lines.  His reading of the Messiaen is among the gentlest I’ve heard, pedaled just enough, very patiently allowing the bell-tones to sound and decay respectfully in the sonorous space.

It was as though Evans were the Christ Child, inserted between Pere et la Vierge (Father and virgin).

And if that seems tenuous, I can’t forget that I recently viewed such images at the AGO in their Florentine show, the AGO that employs someone near & dear to Topher.  He’s been so busy he often misses out on the AGO shows, so i am hoping he did manage to get to the Florentine show.  If he saw it then maybe this isn’t such a crazy understanding of the programming. Or maybe I am reading too much into it.

The next three items were the movements of Ravel’s Sonatine.  We were again hearing a composition that might have influenced Evans.  The middle movement ending reminds me of the middle of Gershwin’s three Preludes, a sudden blues note hanging there.  The outer movements offered more extended harmonies, surprise enharmonic shifts, plus a soupcon of Ravel’s neoclassicism.  Topher’s fingers were as pristine & shimmering as the light effects inside the RBA, where we seemed to float inside a crystalline box of light.

The last four pieces were a back and forth between Poulenc and Evans-via-Topher.  Where the juxtaposition the first time (in that triptych I imagined) mutually reinforced a jazzy mood, the effect was much more explosive this time, with emotions of every sort.

First was Poulenc’s Improvisation #7 in C major, a wonderfully understated piece in a similarly neo-classical place to the Ravel, but instead of flash, Poulenc offers a relaxed and entertaining charisma.  As if in response, Topher made his most exuberant and powerful gestures, in a reading of “On a Clear Day”.   In the RBA, on a clear day you really think you can see forever, or at least as far as Calgary.

But I really was thinking of goodbyes, as the final pair were the darkest of the whole program.  Am I projecting?  Poulenc’s Novelette #3 in E Minor went to a sad place, followed by the exquisite nostalgia of “Some Other Time”, from Topher’s hero Leonard Bernstein (via Evans). 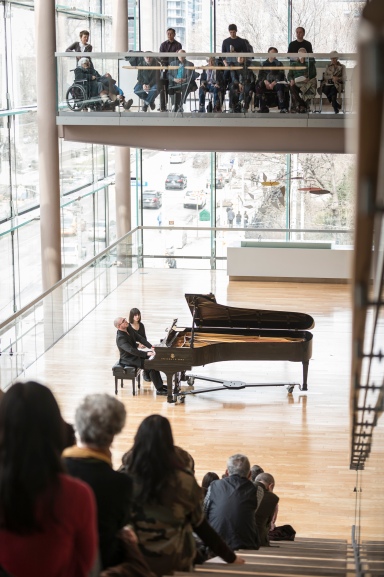 Where has the time all gone to?
Haven’t done half the things we want to
Oh well, we ll catch up some other time

This day was just a token
Too many words are still unspoken
Oh well, we ll catch up some other time

There s so much more embracin
Still to be done but time is racin
Oh well, we ll catch up some other time

There s so much more embracin
Still to be done but time is racin
Oh well, we ll catch up some other time

I don’t think I’m imagining something retrospective, bittersweet in its awareness that it’s time to move on to other things.  In this day and age one doesn’t need to fear that a musician is leaving: not when a career entails travel all over the globe.  But the relationships will change, as close friends at the COC, Opera Atelier, Against the Grain also move on to other adventures.

The program was remarkable, but that doesn’t nearly capture its magic, the delicacy of touch, the facial expressions, the erudite introductions at the podium… It’s amazing how much he already means to this city, how much he’s done.

I sincerely hope we’ll catch up some other time.

3 Responses to Topher and “The French Connection”