I spent two days in Niagara-on-the-Lake.  One can see Toronto from a marathon swimmer’s perspective (as we did after dark).  I took Brandon Mably & Kaffe Fassett down to show them the view.  It’s so odd to see Toronto across all that water, teeny tiny, and then as an after-thought a mere 150 feet away? Oh, just the United States of America.   It’s ass-backwards.  You’d think we’d look at the big country far away.

It’s reversed partly because this is recreational territory.  A short swim away on the other side of this little river is their historic Fort Niagara.  The water has pleasure boats, because the serious commerce is over by the Welland Canal far from this perilous river of rapids & waterfalls.  The lyrical skyline across the bay may be our home but we have roots here too, in this town we visit regularly.

The odd reversal of focus parallels my experience the past few days.  I’m on vacation, a passenger (and sometimes a roadie) on their trip, as Kaffe & Brandon are driven to events thronged by admiring fans. I get to be a fly on the wall.

It’s not just a metaphor to speak of Kaffe as a rockstar (and perhaps Brandon as well).  When Justin Timberlake or Lady Gaga have a new album, not only will they turn up on television to sing their newest hit, but they’ll also go on the road, singing live to adoring fans.

So too with Kaffe.  Every year or so he’s got a new book that jolts the creative juices of his fans.  He’s 6’3” and looks like a matinee idol, but dressed with the flair of a designer of course, even when he’s just grabbing a coffee at the Starbucks in Niagara-on-the-Lake.

His lecture is in some respects like the recorded talks one carries in a gallery, explaining the meaning of paintings, except these are funny & profane.

We’ll see a slide, showing a natural phenomenon that inspired the artist,…

…..followed by his design inspired by that phenomenon.

Kaffe is very humble about it all, although his brazen disregard of procedure has been a breath-taking paradigm shift for the formerly conservative world of knitting, needlepoint & quilting.  As he shows ushis influences, he drops aphorisms into the mix.  For example like a good jazz artist, he wants to remind us that there are no mistakes.  We’re to work with whatever we have, whatever we find: as opposed to being stopped because we can’t find a particular colour of yarn or fabric.

As we watched you could hear deep oohs and ahhs as though the crowd of 200 were receiving some kind of jolt to their pleasure centre: as indeed they did.  Apparently this was a good audience, in their ability to understand what Kaffe was all about, and thereby inspiring him to be funnier & more involved than he might otherwise be.  His involvement is no trivial matter because Fassett is coming up on his 76th birthday in December.  No he doesn’t look his age, partly because he takes good care of himself.

Brandon told me that Kaffe is a bit of a reaction junkie, which is something I totally understand.  When you’re in a classroom and people “get you” and respond  to you, it’s an incredible high, and an inspiration.  Nothing freaks me out like incomprehension, silence, stone-faced impassivity.  Maybe it makes me work harder than I need to, but I totally get this, because in the presence of real excitement, one is in turn further inspired & excited.  It’s a delicious spiral when it works, and as far as I can tell that’s what Kaffe sees wherever he goes.

I am reminded of something I read about long ago, namely “Winston Churchill  Syndrome”.  Is there such a thing? It was something I read of, that was associated with high performance older men who derived great satisfaction from their work.  Churchill for instance lived into his 90s.  The examples I recall were people like Picasso or von Karajan, artists rejuvenated by the profound satisfaction of their art. 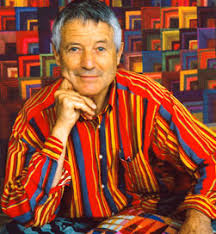 Kaffe may be an artist on tour with his designs, but in a real sense he’s a teacher.  We’re learning not just where he came from –the influences & inspirations—but in a more fundamental sense, he shows us how to see.  The juxtaposition of images is empowering because it shows you how to riff from an image you’ve seen, in the same way that a sound can be sampled or a tune can become the basis for a set of variations.  His books are deeper explorations of his process, taking one along for the creative journey.

It’s been incredible fun getting close to Kaffe and Brandon, to whom we said our goodbyes at Pearson Sunday.  They’re off to Alberta next.