Guggenheim’s Great Upheaval at the AGO

There’s a moment in Terry Gilliam’s Adventures of Baron Munchausen when Vulcan is pressing carbon into a diamond for his wife Venus, and of course she expresses her gratitude, a moment before handing the thing to a lady in waiting with the words “another diamond” (and it gets thrown onto a pile, unappreciated).

At the first appearance of The Great Upheaval –the new show opening at the Art Gallery of Ontario— on its home turf, namely the Guggenheim Museum in New York in 2011, the NY Times review was decidedly unimpressed.  They saw it as a prudent use of the gallery’s permanent collection and not much more than that.  I wonder if the New Yorkers are like Venus, bored with brilliance and unable to appreciate what they have.

No wonder the curatorial staff seemed surprised at our rapturous response here in Toronto .   I have to wonder whether the riches of major centres such as NY turn people into philistines, blasé about brilliance because they’re regularly surrounded by masterpieces, and have lost their reverence for art in the process.  It’s a truism that Torontonians haven’t made it until they go to the USA or Europe.  Perhaps the same kind of dynamic happens in NYC as well, a place that’s too cool for its own good.   The new AGO show from the Guggenheim in NYC is called The Great Upheaval, and its only foreign excursion is to Toronto.

And maybe we’re also so accustomed to language proclaiming great upheavals that we’ve become inured.  I wouldn’t miss a chance to see great art from this period (1910-1918) but can any show possibly live up to such hyperbolic language?   I need a new set of eyes that can see words afresh.

But The Great Upheaval is true to its promise, a show of such riches that as you come through you will be surrounded by gems of incalculable worth whether or not your husband is the God Vulcan. 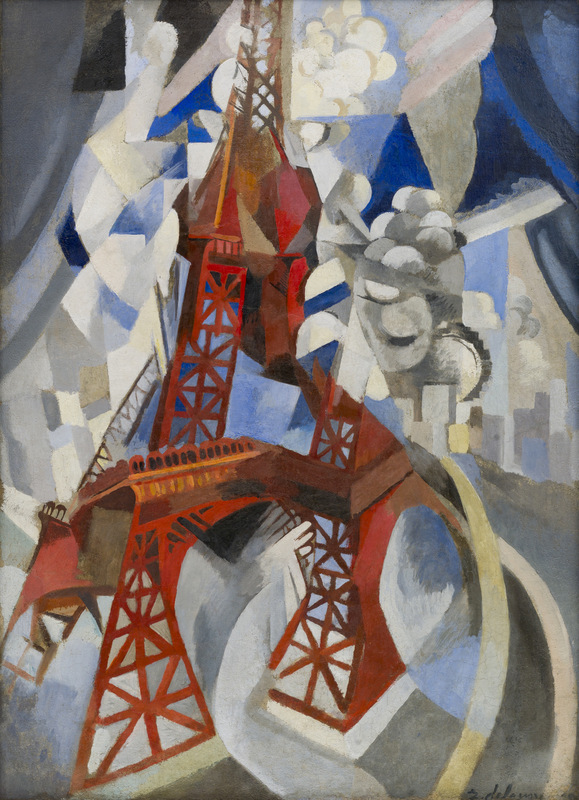 The story of the Guggenheim collection is in some ways a perfect parallel narrative to the story of art in the 20th century, as we see the taste of a collector identifying a wonderful new direction for art & artists.  While it may not have been their original intention, The Great Upheaval is in some ways like a primal story for the collection, which began modestly in the late 1920s long before there was a building.

The organization of The Great Upheaval seems to owe at least a little to the remarkable shape of the space in NY, that long spiral corridor in that magnificent Frank Lloyd Wright building.  The AGO space can’t manage the same perfect linearity, but then again, what space could?  The art represented in the exhibition from 1910 to 1918 is offered up de facto, which is to say, chronologically, rather than in themed groups around movements or artists.  Yes we have several artists whose work recurs throughout.  But we encounter their work year by year.  The result is a kind of documentary effect, as awkward as history and without any sense that the curators are interfering whatsoever.

Make no mistake, this is a powerful show.  I was a bit surprised to see how quickly my media colleagues raced through.  After Ai Weiwei & David Bowie, this is a return not just to first principles for the AGO,  but a shift to something more substantial & challenging.  We begin with Cezanne, Seurat,  and Gaugin but we also see Kandinsky and Chagall.  Mondrian & Picasso are there too.  And there are other artists I didn’t know such as Kupka, Delaunay, Duchamp, Franz Marc and Branciusi, several -isms , such as cubism & futurism. And more.

The questions and issues underlying this exhibition feel like the central questions for all western art.  The show purports to begin with “precursors” (as they call Cezanne, Seurat, and Gaugin).

But those three were themselves responding to something before,and could easily be understood as radical & avant garde.  To get a real context for the actual upheaval on a trip to the AGO one could start with a quick look at examples of 18th & 19th century painting, preferably the most academic & representational examples.  One wouldn’t want to look at Turner or Degas or Van Gogh, because those painters were already beginning the “upheaval” (in the same way that Cezanne, Seurat & especially Gaugin were doing).

But those three are precursors in the sense that they not only begin the break from what came before, but laid down the methodology of the avant garde.  Gaugin was one of the Nabis, for example, with a manifesto from Debussy’s friend Maurice Denis (who painted the cover for the program of Maeterlinck’s Pelléas et Mélisande). Each painter would undertake a kind of journey often beginning with something academic & conservative, and then striking off into their own individual terrain, becoming progressively less representational and more quirky, stylized and yes, abstract.  The manifesto became a kind of virtual rallying place, like a public square, where artists could gather OR react in the opposite direction.  Movements and counter-movements became more and more normal by 1910.  Many of the painters in The Great Upheaval share characteristics with one another, although I am speaking from a superficial grasp (forgive me… I just saw the show, and spout off about Debussy & Denis & Gaugin, not Kandinsky, who I know in a more superficial way).  Each movement can be understood as a kind of conversation, a discursive community where some (if not all) of the terms (as well as the technical requirements of the art-form) are understood by those at the core of the group, while others around them grasp some if not all the necessary concepts.   Ideally the “upheaval“ shown in such an exhibit  would be more inclusive, a much bigger show, that would incorporate the entire process, beginning somewhere around the Impressionists, or perhaps only with post-impressionists such as Van Gogh, Seurat & Gaugin.  But: how much can one see?  In fact the show’s purview of 1910-1918 is already immense.  I couldn’t really see it all in two hours. The show has me dreaming immense dreams, seeing huge patterns & synthesizing relationships and influences across a continent’s art.

The ambitions of this show –and its title—are large, and I am above all, impressed and moved by such lofty ambitions.  I believe one needs to come with an open mind, prepared to make multiple visits, as there’s a great deal of wonderful art in this show, more than you can see in one visit.

I have not yet seen enough gems to be blasé. (Click image for more information about the exhibit.)

3 Responses to Guggenheim’s Great Upheaval at the AGO