What was it that he said again?

Joe Wos could have been talking about the way we make them, or the way we perceive them. I think he said that cartoons both exaggerate and simplify. The funny thing is that my recollection of him is exactly like that. I’m remembering him as a virtual cartoon, not because of who he is so much as the way he reminds me of a particular cartoon character.

At first glance, as he sat by the cash register in this place full of comics and memorabilia, I thought I was in the presence of someone just like that comic book guy on The Simpsons (speaking of toons). You know who I mean? The one in the store who is a nerd of deep & esoteric knowledge. If it were rocket science or medicine he’d be rich, but because it’s something comparatively obscure –like comics – he has not yet become wealthy, although there are other things in life besides money, right? I realize that by resorting to a stereotype I’m being simplistic, and in the process creating something in my mind that’s just like a cartoon. 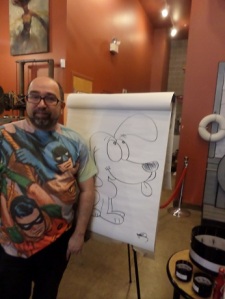 Cartoonist and Toonseum Executive Director (curator?) Joe Wos alongside one of his quick creations (photo by Leslie Barcza)

It had started out as a tour of a small gallery. Toonseum is a museum of the cartoon, or “toon” for short. If you don’t realize how broad a purview is covered by a place such as Toonseum, ask Joe Wos.   (hm or should one use “the” before saying the name? Is it “The Toonseum“? or just “Toonseum”? I forgot to ask) Today’s show, of artists illustrating for Golden Books had included images of famous artists such as Richard Scarry. Some had been refugees from eastern Europe (Feodor Rojankovsky, and Tibor Gergely), as well as artists formerly employed by Disney, who had chosen to go off on their own, perhaps giving up something financially for greater expressive freedom.

And come to think of it, do we really appreciate people like that, with their encyclopaedic knowledge of esoterica?

At least the nerds of the world are no longer ignored. Yes it started out as a tour. And then suddenly by good fortune I discovered I’d come exactly at the time when I’d be able to take a brief drawing lesson. Oh my gosh what a windfall. There were three others there at the same time , all of us sitting there watching JW’s lecture/demonstration. He explained some of the basics of cartoons. Hm…. Exaggeration and simplicity? As I thought about it, I was reminded of the cloisonists, painters such as van Gogh and Gaugin (at least for part of his career), whose paintings resemble cartoons, because they are a series of blocks of colour.  “Cloisonism” is a term coined by a U of T professor awhile ago to describe the phenomenon, whereby the artists emulated the style of cloisonné (a kind of ceramic where each cartoon section is surrounded by a thin strip of metal, and looks indeed like a cartoon). I think it was just as relevant to observe the similarity to stained glass. Just as a window showing a saint or Jesus would be forced to work in blocks of colour surrounded by a metal outline –because of the limits of glass—so too these painters. Gaugin at this time –before Tahiti—was a symbolist, and associating with others who were part of the movement. Maurice Denis, who wrote the manifesto for the Nabis (the movement to which Gaugin was attached at this time) lived with Aurelien Lugné-Poe, the man who directed the first production of Maeterlinck’s play Pelléas et Mélisande in 1893. You want to see a very exalted cartoon? Look at the first edition (either the cover or frontispiece: both by Denis) for Debussy’s La Demoiselle élue. You can’t see any features clearly because these are highly stylized images, aiming for something symbolic & ideal rather than realistic & individualized.  Anything by Denis or Gaugin from this period aims for an ideal largely by emulating stained glass and avoid realism or specificity at all costs. So in other words, I hope I can be forgiven by Mr Wos for the way my mind works. I am not one to denigrate cartoons, cartoonists or cartoon collectors, associating such works with some very ambitious artists. 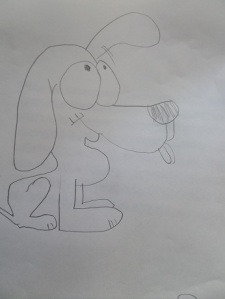 My puppy, created with the help of Joe Wos in cartoon class today.

After speaking of these two principles he then went on to demonstrate. We were taken along for the demonstration, invited to draw the same sorts of figures on our own piece of paper. You can see JW’s puppy (his last drawing) behind him on the easel. JW took things a step further by employing the letters of words in the drawings. We all did an owl, using the letters O, W and L. It was an apt demonstration of how even with the simplification of a cartoon, he could still portray something quite recognizably. Here you can see one of my drawings that I made as I took in the handiwork of the master. I think his puppy is far more sympathetic than mine.

Not what I expected!

This entry was posted in Art, Architecture & Design and tagged Joe Wos, Toonseum. Bookmark the permalink.