Against the Grain have done it again. Their outdoor production of Debussy’s Pelléas et Mélisande is highly original, illuminating the opera is several unforgettable ways.  Joel Ivany’s director’s note in the program says “Upon getting to know this opera, it became clear to me that AtG’s production must be set outdoors.“ 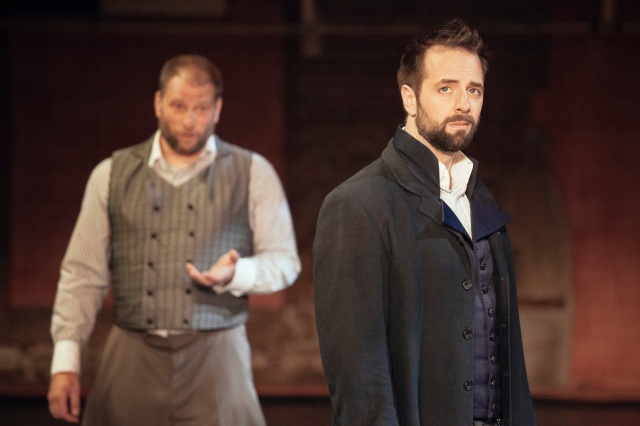 How did that work?

Watching on the longest day of the year, we saw the opera by natural light for the first three acts. Birds sang throughout, sometimes creating odd & entirely natural effects from first act to last. By the time of the fratricide in a dark forest that concludes Act IV, we were in genuine darkness among the trees of the Max Tanenbaum Courtyard Gardens.

Yet I believe the greatest benefit of the outdoor performance was aural rather than visual. The space does not have ideal acoustics, the trees and landscape sucking up much of the sound. As a result, the operatic voices in the cast were dampened, rarely sounding very powerful, with the result that the effect in combination with the understated pianism of music director Julien LeBlanc was very intimate. No voice could overpower the surrounding, resulting in a subdued and even internalized effect. It reminded me of the Bayreuth Festspielhaus covered orchestra pit in reverse (where the cover restrains the orchestra from covering singers), an acoustical by-product of the space that enhanced the performance, but this time by holding back the singers rather than their accompaniment.

And yet we were in a very tight space, requiring flawless acting due to our proximity to the action. Etienne Dupuis as Pelléas was very gentle, understated until he cut loose in Act IV, the prettiest sounding Pelléas I’ve ever heard in person. Similarly Miriam Khalil’s was a very poised Mélisande, inscrutably beautiful, vocally secure. Gregory Dahl’s Golaud was remarkable for his vulnerability in the first two acts, but becoming progressively more menacing as the opera went on. Dahl & Khalil managed to make one of the hardest scenes in all opera –the scene where the jealous husband drags his wife by the hair—totally convincing in that tight space, where you could see ever facial expression and movement. Alain Coulombe as Arkel had the required solidity of presence & voice for some of the best loved lines in the opera, coming into his own especially in the last scene, where he more or less takes over. Andrea Núñez played a very convincing Yniold in the scene where Golaud uses his young son to spy on his wife & brother; I was sad that AtG decided to cut Yniold’s other scene from the last act, one that admittedly doesn’t advance the action, but one that is nonetheless wonderful both for its music & atmosphere (and happens to be my favourite scene of the opera).

Ivany gave us the most genuinely spiritual interpretation of the opera I’ve ever encountered. I won’t say more, so as not to spoil it for those who haven’t yet seen it. AtG’s Pelléas et Mélisande continues June 23rd and 25th outside at 7:30 at the Canadian Opera Company’s Max Tanenbaum Courtyard Gardens.