I saw the second performance of the Canadian Opera Company’s production of Falstaff tonight, enjoying it even more than the first time. Where my first view was from up in ring 3—ideal to get the big picture but too far away for subtleties, especially in crowd scenes—tonight’s was from the very front, where I could see details.

Director Robert Carsen’s reading of this wonderful comedy of desire & appetite goes back and forth between the ribald & the gustatory, between blatant challenges to a husband’s fidelity & to a stomach’s capacity. A few of the performances are painted in the colourful strokes of cartoons, larger than life gestures that read even at the very back of the theatre.

You will have heard of Gerald Finley’s return to Toronto, a great star of European opera stages, a favourite in the USA, but taking his first steps on the Four Seasons Centre stage. His is a most Italianate reading, exquisite timing in the “no’s” he hurls at his sidekicks in his big monologue in the first scene (when he asks a series of rhetorical questions about the nature of honour).  Finley shows astonishing depth in this, his first undertaking of the role. It’s not the same as it was opening night, as there were a couple of places where he’s still playing with the sound, sometimes sweet, sometimes edgy and even willing to offer up a strident and unmusical sound, in the interest of a laugh. When we come to the opening scene of the last act we get a properly Shakespearean soliloquy, a mad thieving world he bemoans, at his lowest point in the opera. The last triumphant moments (captured so beautifully on the program cover and on the signage promoting the production) are the occasion for the headline, wherein I see the most perfect expression of the urges that seem to be the subject of Carsen’s exploration of this Shakespearean opera. When all is finally forgiven and everyone sits down to a wedding feast it’s a kind of sharing that reminds me of holy communion, one shared finally by everyone on stage. 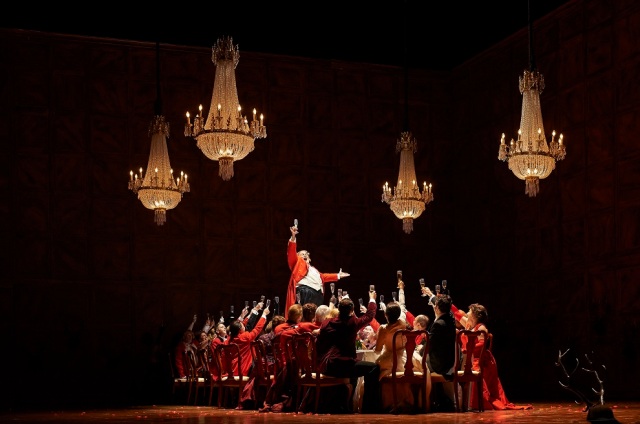 The other two larger than life portrayals?

I mentioned Marie-Nicole Lemieux’s Mistress Quickly, who does her best to match Finley’s energy & commitment, a very physical portrayal with a wonderful lower voice to match, as good as it gets in this part.

The other is perhaps unexpected, namely Simone Osborne, whose energy reminds me of Veronica (Archie’s girlfriend) or some other teenage icon such as Annette Funicello or Gidget. The body language was fun, often silly and always at an energy level making her the star of most of the scenes she was in.

Other performances only really came into focus when I was able to sit up close. The chorus did yeoman service of course, especially in some wonderful ensembles pieces, working with Russell Braun in the lengthy set-pieces in Act II when Falstaff is hiding from a pursuing horde, that Carsen also turned into a kind of crazy cartoon of synchronized slow-motion movements. Braun’s expressions are wonderful, especially in the scene as Fontana, Ford in a wonderfully whimsical disguise that reminded me of a cross between Elvis & Willy Nelson, although I may have missed the intended reference.  Whenever he’s onstage, the comedy has a more serious dimension.

Falstaff’s side-kicks –Bardolfo and Pistola—have a great amount of subtle business that I saw from up close, some of the zaniest moments in the opera, thanks to Colin Ainsworth (in a very different context from what I saw him doing on Tuesday) and Robert Gleadow. There’s a great deal of beautiful singing, with Michael Colvin starting us off (declaiming the opera’s title in the first minute of the work), Lyne Fortin and Lauren Segal as the merry wives at the centre of the story, and the sweet voice of Frédéric Antoun.