Gallery attractions are sometimes from a permanent collection, sometimes brought in from elsewhere.  When you visit the National Gallery in Ottawa next month you’ll be able to see the Alex Colville show that was seen in Toronto at the AGO last year.

But currently the attractions I found most impressive at the National Gallery actually come from their permanent collection.  They own such a large number of pieces by MC Escher—the third largest collection of his work in the world—that they were able to assemble a big show from among those pieces. Escher is the draw right now, being a famous artist with a big sign on the outside of the gallery. As your typical baby-boomer, I believe I’ve been staring at Escher for most of my life. It’s a thrill to see so many images that I’d once owned as reproductions on my wall in the dim & distant past. His craftsmanship is impressive, his eye frighteningly astute.

One of the odd correlations that likely doesn’t mean anything was to walk into a room with the following: 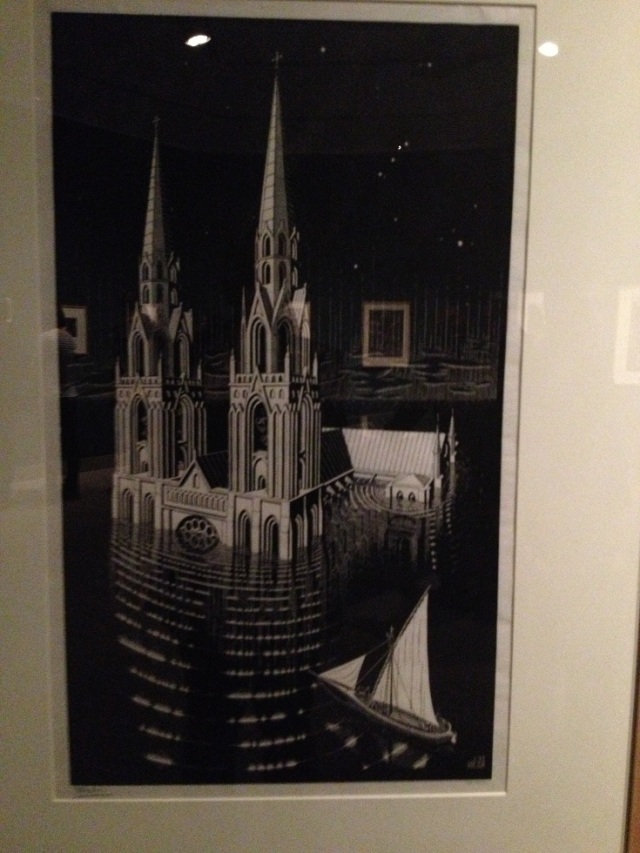 I might be the only person making this correlation: that Claude Debussy not only wrote a pair of pieces titled “Arabesque” (#1 and #2 that is), but spoke of the arabesque patterns in musical scores of others (for instance JS Bach). And of course he would then write a piece of music called “The Drowned Cathedral”, aka “Le Cathedral Engloutie”.  Presumably Escher and Debussy were familiar with the same legend.

Maybe it’s just a fluke, a coincidence of no real significance. But there are books written about Debussy and design. Roy Howat’s Debussy in Proportion presents the hypothesis that Debussy’s music is organized on the page according to strict principles of proportionality: not unlike what Escher did.

The page of the score is beautiful, no? Compositions can look good on the page, but perhaps none more so than Debussy’s.

I have no revelations to add, only that it is interesting to see that coincidence, between the arabesque perfection of Escher & Debussy, AND that they both created works celebrating the legend of the drowned cathedral.  Debussy was a symbolist, and maybe Escher too responded to symbolist influences, considering the philosophical implications of his works (a whole other matter worthy of detailed investigation). Escher being the later artist (Debussy dying in 1917, Escher in 1972) maybe it’s as simple as a matter of influence. Perhaps the artist was influenced by the composer..?  But more likely, they were a pair of artists influenced by a cultural current.

Famous as Escher may be, I was surprised to find something unexpected and powerful lurking around a corner in the gallery. You walk into the room where Geoffrey Farmer’s 2012 work “Leaves of Grass” is assembled, and you will be amazed. I was reminded of the first couple of times I saw that sequence in Gone With the Wind when Scarlett goes looking for the doctor at the Atlanta train station, and the camera pulls out upon an immense scene of casualties lying, waiting for someone.
No I don’t mean that Farmer’s piece is tragic or sad. But –as in the film—you don’t immediately understand the scale of what you’re looking at. Hugeness is sometimes incomprehensible.

As it began to dawn on me that I was looking at something immense, I struggled to quantify it. We’re looking at a two sided installation of many photos mounted on bamboo. The notes on the wall say over 16,000 photos from over 900 magazines. I quickly paced a small part of the floor –as the piece sits on a table that’s in regular segments—and concluded that the piece sits on a table that has 31 segments, each roughly four feet in length. So in other words we’re in the presence of a piece of art that’s 120 feet long, on two sides of this large assembly. The picture included can only suggest some of that process, where we are confronted with so many images and such a sense of immensity.  The best way to really grasp this –including the disorienting struggle that likely begins your orientation to the work– is to experience it in person.  More than any art work I’ve seen recently it requires the human experience of the piece, as this cumulative effect can’t be understood in any virtual reproduction such as a book. 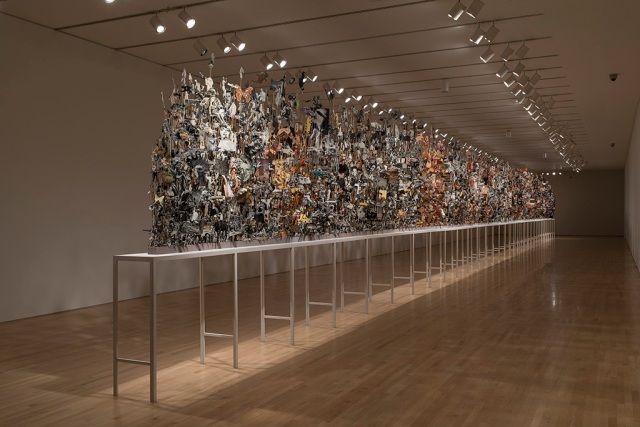 You walk along this two-sided wall, picking out images that are recognizable alongside those that are not. We’re told it’s an assembly of the period between 1935 and 1985 in chronological order. At the bottom, the images are smaller, while at the top, they’re bigger. We’re looking at people and objects. There are a great many cameras on display, typewriters, cars, and other products, presumably from the ads in the magazine. We see the iconic people of that time –movie-stars and singers and politicians—and the products sold to pay for the magazines. There’s so much there, that one can’t possibly grasp it all in one visit. It’s epic, truly massive in the same way as that scene in Gone With the Wind, but much more ambiguous and variegated.

Purchased by the gallery, “Leaves of Grass” is part of the permanent collection and hopefully will stay on display. I will revisit the piece next time I am there.  I urge you to check it out too.

And in passing, i couldn’t help noticing how much the National Gallery’s architecture is itself like a reminder of Escher–almost a meditation upon geometric design– making the building a wonderfully suggestive home for his work.

This entry was posted in Art, Architecture & Design, Music and musicology. Bookmark the permalink.