Wendy Nielsen is one of the most influential people in Canada’s opera community.

After an international career as a soprano that has included starring appearances at the Metropolitan Opera, Nielsen went on to create a private voice studio. 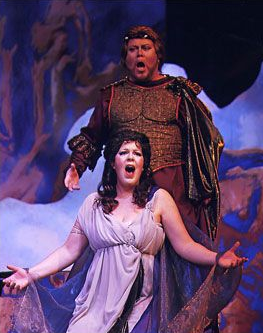 Nielsen is Acting Head of Voice at the University of Toronto’s Faculty of Music, the Head Vocal Consultant for the Canadian Opera Company’s Ensemble Studio, and Artistic Director of three vocal programs at St. Andrews by the Sea in New Brunswick.

If you sing well chances are she had something to do with it, and if you aren’t singing right she’s one of the people you could turn to, to make things right. In March I reviewed Postcard from Morocco from the U of T Opera Department, including some of her students. And now the Ensemble Studio of the COC are preparing their annual show, the May 15th performance of Barber of Seville.

I had to ask Nielsen 10 questions: five about herself and five more about the Ensemble show.

Of course, I have a bit of both my parents in my personality. I try to emulate my father’s even temperament and my mother’s love of a good laugh. They are both very good amateur musicians, music is certainly a big part of our family life. I asked my husband who he thought I was most like and he replied without pausing that I am most like my paternal grandmother. She certainly was a huge influence on me in the most profound of ways.

2-What is the best thing or worst thing about being a voice teacher?

The best thing about being a voice teacher is witnessing a singer find their best expressive self when the technique works. It is thrilling and completely addictive!

Worst thing, hmmm I guess commiserating with them when the business of singing let’s them down.

3-Who do you like to listen to or watch?

I don’t listen to much classical music in my free time. I enjoy all types of music and especially a lot of east coast musicians. You can take the girl out of New Brunswick etc….

4-What ability or skill do you wish you had, that you don’t have?

I wish that I was a better swimmer and I would love to have some talent in some sort of visual art. Every summer I think i am going to create some sort of multiple media thing, one day!

5-When you’re just relaxing and not working what is your favourite thing to do?

I love to read and have a morning ritual of getting up at 7 , making a cup of tea, going back to bed and reading for a half hour or so before turning on the computer and getting on with the day. It makes me feel as though I am in control, ha! Seriously, I usually read a little something inspirational, something to think on for the day. Then some fiction, devouring the books of Kate Atkinson at the moment.  And sometimes a little geeky moment with a vocal pedagogy text.

When I am home in NB, I love to jam with my husband and son on my new passion: the accordion! 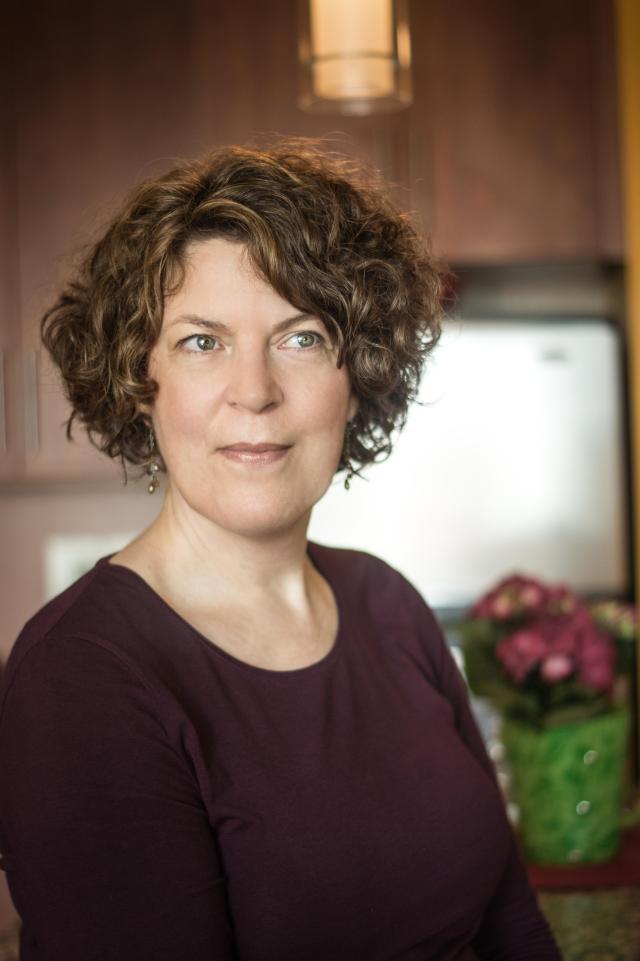 Five more about teaching singing & preparing the Ensemble Studio for their annual production, The Barber of Seville on Friday May 15th.

1- You began your career as a singer before becoming a singing teacher. What teachers were most influential for you as a singer, and also in your understanding of how to teach singing?

Most influential teachers. There are several beginning in childhood with my first school music teacher Kate Jackson in Harvey Station, NB. It was in her class that I first heard opera in about grade three. “Vesti la giubba”, I was thrilled by it! I also remember her playing “Der Erlkonig” and being terrified that she would play it again and desperately wishing that she would play it again.

I had an amazing English teacher in high school, he also directed the Drama club: Alfred Paul-Elias. He let me have free range of expression and encouraged me to act, write and direct my own shows.

My first voice teacher was seminal, Mabel Doak. She taught me the importance of good tone, always! George Evelyn at Mount Allison and University of Lethbridge taught me to be a diligent musician and to sing with physical connection. At UBC,French Tickner ruled the opera department and he taught me so much about stage craft.

When I moved to Toronto I studied with Mary Morrison. We now have studios next door to one another at U of T! Lessons with Mary were always an exploration and not a dictation, this helped me so much through the years I was in the COC Ensemble and receiving such a wide variety of feedback. Dixie Ross Neill was the head of the Ensemble then and she really recognized the potential in my voice for specific repertoire. I think I learned as much from Donald Palumbo, the COC chorus master ,during those years as from anyone. Michael McMahon, pianist and a frequent collaborator of mine,was a tremendous influence on me as a singer and as a teacher. Shortly after beginning the summer program that I oversee in St Andrews he came onboard and helped to create the atmosphere of learning that continues to this day.

I would say that the single biggest influence on my singing and teaching were the twelve seasons that I was at the Met. To sing on that stage and to be able to watch rehearsals and performances with the best in the world was a school like no other. In my early 40s I was fortunate enough to be introduced to Marie Daveluy who is the single biggest vocal influence upon me. Her aesthetic and dogged pursuit of freely produced sound affected me deeply and informs my daily teaching.

I continually learn so much from my colleagues,in particular Liz Upchurch at the COC, Malcolm Balk an Alexander Teacher from Montreal, Tom Diamond stage director and Jennifer Swan, body/breath specialist.

2- Most people think they can sing, but opera is something else again. Please talk about singing opera, and how the use of the voice differs from other kinds of singing.

Opera singing is the heaviest weight class in the Olympics of singing. We maximize our own internal acoustic in order to be able to project without a microphone into big opera houses. We all have vocal cords and opera singers have ones that look much the same as others.  What we do work toward is maximizing our breath control so that we can get ample volume and the ability to sustain long lines.Think of an athlete who has the same body parts as everyone else but has focused on the function of a particular muscle group and its coordination to become an elite athlete. I work with a couple of singers who are not opera singers. One of them is David Myles, a wonderful singer song writer from NB. During a session last week we were discussing his falsetto and his upper full voice. The lesson could have easily been for an opera singer because those sorts of issues are the same. He needs to be able to reproduce the notes with ease and expression even though he uses a microphone.

3-What are the challenges of working with the Ensemble Studio in preparing their annual production?

There are particular challenges in helping the Ensemble prepare for their one show in the run of Barber, this year. It is thrilling for them to have this opportunity to sing a leading role in a mainstage production. This is a superb training opportunity. The Ensemble show is chosen carefully to provide the best fit possible for the voices in the program, certainly Walkure wouldn’t be a good show for the Ensemble 😉

One of the biggest challenges in watching and absorbing rehearsals (many of the Ensemble members are official covers for the lead roles as well) is being ‘unduly influenced’ by the main cast. As singers we are aurally susceptible and whether we intend it or not, we absorb the voices that we are exposed to. It is difficult not to do an imitation of the person one is covering , in particular if their voice qualities are similar. You must be able to do the staging as it is planned with your body and character ideas but this is challenging. Fortunately, the Ensemble will be well rehearsed by Allison Grant and they have told me already that she is working hard to be true to the production while respecting their individual performances. That said, the converse is true. One can gain a lot of knowledge from watching the pros rehearse and perform. I remember the thrill as a COC chorus member to be onstage with Aprile Millo in Andrea Chenier, watching her
breathe and produce that glorious sound.

4-If you could give one instruction to young students who might read this, what would you tell anyone studying singing?

One piece of advice for singers ‘Cultivate your uniqueness’. The late Richard Bradshaw, who was another exceptional mentor to me, once told me that all of the great voices in opera and other genres had one thing in common. They were recognizable within a couple of notes.Who wants to sound like everyone else?!?!

5- What voices would you point to –either singing today or from the past—as examples of the best technique, and do you ever imitate/ emulate anyone either in your own life as a singer, or more recently as a teacher (in recommending that a student try to sound a particular way)?

There are so many great singers for students to listen to and so many of them are singing at the COC these days, thanks in no small part to the efforts of Alexander Neef. His influence is huge and I respect what he is doing so much, he is so invested in the Ensemble and their success as individuals. It is a joy to be a part of it.

To have Furlanetto here was extraordinary, I am constantly suggesting that baritones and basses listen to him. I had the pleasure of singing Donna Elvira to his Leporello at the Met. His singing is perfection.  I am quite enamoured of the Italian sound, Bastianini is the pinnacle. I am also a huge fan of Mariella Devia, the Italian soprano.My all time fav mezzo is Cossoto and tenor would have to be Corelli.

Stephen Clarke, who oversees the Stratton Collection and Foundation, has encyclopedic knowledge of singers and repertoire. I count myself fortunate to be able to be treated to visits when he plays his favourite recordings.  Ben Heppner’s Tristan here was like witnessing history. Russell Braun’s numerous roles over the past several seasons have been a huge inspiration to the young men at. U of T. And the sopranos and mezzos have had Jane Archibald, Adrianne Pieczonka, Elizabeth DeShong, Marie-Nicole Lemieux, Christine Goerke and Sondra Radvanosky to revel in.

We are living in a golden age of singing in Toronto!

May 15th, the Canadian Opera Company present The Barber of Seville with a cast drawn from the Ensemble Studio.