TSO on the road with Lau, Mendelssohn and Bruckner

Tonight’s Toronto Symphony concert was a kind of farewell before going on a short tour to Ottawa & Montreal. The Roy Thomson Hall audience heard the programme they’re taking on the road.

Each of the three works represents a special kind of challenge.

The best reception of the night? I’m not sure. It might have been the response to the most familiar work on the program, namely Mendelssohn’s violin concerto in E minor, played by young Augustin Hadelich. 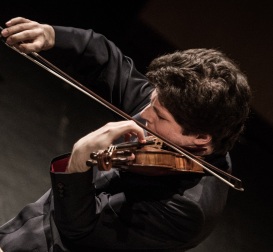 Or it might have been the huge response to his encore, Paganini Caprice #5. As I listened to the encore, exquisitely articulate, sometimes soft, sometimes powerful, always bang on pitch and hugely expressive, it was as though to tell us, “sure we all like Mendelssohn’s concerto in E minor, but there’s a great deal more that a violinist can offer.”

Such as a Paganini Caprice.

In our recent interview he explained something about his playing. I had asked him about teachers & influences.

Some of the best teachers I had were chamber musicians: Norbert Brainin (from the Amadeus Quartet), whom my parents tracked down in Italy when I was around 12 and convinced to give me lessons, and later Joel Smirnoff (from the Juilliard Quartet) whom I studied with at Juilliard. Both of them, perhaps partially due to their chamber music background, taught the whole score, beyond just the violin part. It is amazing how many teachers, even the famous ones, do not really study and teach the orchestral scores of the great violin concertos beyond just the violin part. If you look at the violin part by itself, it seems like you have a huge amount of choices and so many different ways you could play it. But the better you know and understand the whole score, the clearer it becomes how you should play. You’ll be able to see how the composer put the piece together, what the other players are doing, and what it all means. A great composer like Mendelssohn would never write the violin melody first and separate from the ‘accompaniment’– rather, the overall harmonic processes and the expression of the violin are interconnected. Even though the violin is leading the concerto, the violinist has to listen and react to–and often also accompany–the orchestra. In the end, the way the soloist, orchestra and conductor interact in a concerto is really not that different from chamber music.

Hadelich played this concerto as though he had thought through the combined effect with the orchestra. It sounds simple, and it’s how every player should work. Yet when I think about it, I’ve heard very few violinists who seem to get this. Stern and Zukerman and Perlman for instance play this way: the most accomplished virtuosi of the past half century. They make their instrument sound beautiful with wonderful cantabile on the slow soulful passages, and bring out the key melodic highlights when necessary: but in collaboration with the orchestra. I’ve heard the outer movements played faster, yet that usually means that something is lost in terms of the clear articulation of the key moments. This dialogue with this orchestra, led by Peter Oundjian—who Hadelich reminded me was himself a violinist and therefore the ideal conductor for such repertoire—was very lucid, very direct.

To begin the orchestra played Treeship, a short work from Kevin Lau, who has been resident composer with the TSO. Sometimes compositions have fanciful programmes explaining the inspiration for the music. I don’t know that I understood the idea of “Treeship” except that the resulting composition was very entertaining, wonderfully tonal. It sounded a bit like film music in its embrace of lush harmonies such as you’d find in a film-score, instantaneous in its effects. There’s some gorgeous work for the cellos, and lots of delicate colours for winds scattered throughout. I don’t know how extensive the dialogue was between Lau and the TSO during the composition, but in Treeship he’s given them a handsome vehicle to open a concert.

To close we heard Bruckner’s 7th Symphony, a work to challenge both the orchestra & audience alike. Forgive me, I had the quintessential Toronto experience listening to this symphony tonight.

And what’s more Torontonian than to be feeling embarrassed by fellow citizens. I’ve been stirred deeply by the way Peter Oundjian has built the TSO audience, standing at the podium with his microphone addressing us across the cold gulf that is the ambience of RTH, an unwelcoming space, inspiring us and his players. He works miracles most times. For two movements of the Bruckner he had the audience listening in silence, a pair of movements of great intensity, played with fabulous commitment by the TSO, particularly the winds.

Bu it’s a long symphony, and challenges an orchestra in the subtlest ways. The fidgeting built up in the last two movements, even though the orchestra wasn’t backing down from Bruckner. Those who left –not so very many—sometimes did so noisily.  It may also have been the warmth of the the day.  There we were sitting right in front of Hadelich –who had come into the hall to listen to the Bruckner & perhaps to simply unwind after his virtuosic display—while we heard all the assorted fidgets and escapes.  I was tempted to explain to him that actually we were all tired from our hard days at work, that Bruckner is a stern test for orchestra & audience alike.

But I am grateful that Oundjian is stretching the audience with a program like this one, works that are well-suited to RTH and the skills of the symphony. We grow from such encounters.

3 Responses to TSO on the road with Lau, Mendelssohn and Bruckner