For the past few weeks I’d been listening to a recent CD of music for this project titled DIVE: Odes for Lighea (which might be the title they were working with before, although tonight the program says DIVE and nothing further). I mistakenly spoke of it as “Nik Beeson’s new opera”, when I should have acknowledged the collective creation, and here I take a stab at identifying the roles in that Collective, even if I may be wrong again (luckily for me they’re a forgiving bunch):

There are three players in DIVE, encompassing several characters:

When you’re describing something new one works from existing models to make the newness intelligible. For the first half or more of the work, it didn’t seem operatic. There’s incidental music while Sanger’s words set up the key incidents of the story. I don’t think this is anything to worry about so much as a matter of seeking to understand. The core of the story, the last fifteen-twenty minutes is intensely operatic (although I am speaking of a subjective experience, so I might have the timing completely wrong). Where baroque and classical opera, or even modern musicals typically go back and forth between purely lyrical bits (numbers: songs, arias or ensembles), and either dialogue or recitative, here there is a gradual deepening of the musical side.

I am wary of using genre in a discussion, particularly when making a first acquaintance with a piece. The first half-hour is full of pithy dialogue and big laughs, sometimes bawdy, sometimes political. Pastko and Gouveia are a hugely likeable pair, drawing us in inexorably via the charm of the writing and the quirky characters each of them brings to life for us. They’re pulling us closer, to set up the scenario for the climactic set-piece, as though –to use one of the main metaphors of Sanger’s poetic text—we were opening a shell (the different pieces of dialogue setting up the scenario), that enables us to discover the pearl (the complex music number that ends the work) nestled inside. Speaking as someone who is no longer so young, this is one of the most sensitive portrayals of age & aging I’ve ever encountered.

Scott Penner’s set design puts the action in the midst of an audience surrounding the performers on each side, making the work even more theatrical (as if our imaginations weren’t already engaged by mermaids & singing).

Beeson and Krucker are real-life partners, so it stands to reason that he wrote with her in mind, that the composition is designed for her unique gifts. I’ve heard her before, and this time her special sounds seem to work especially well. Krucker’s performance is something to marvel at, in some of her characteristic uses of a trained voice to sound sometimes operatic, sometimes gently lyrical, sometimes taking on sounds that are superhuman with what sounds like extra over-tones. Lighea can’t be mistaken for Ariel, the cute Disney mermaid, oh no. As in the classical stories, the eroticism is there, but also danger. She is powerful, an immortal goddess. Odysseus had to cover his ears to protect himself from the irresistible sirens’ songs. The project is highly operatic in the traditional sense, when we recall that composers at one time would write with a singer in mind. But in truth it’s a collaboration, as Krucker’s improvisations bring the score to life.

The old saying about musicals is that the singing must begin where you can’t speak any more, where the music is necessary to illustrate or to tell the story. Indeed that’s the case here, as reality seems to change. We move into a realm that is ambiguous and unreal, and progressively more and more musical. We listen simultaneously to live performance and tape, to Krucker singing live and off a recording as though –as the Professor remembers and relives the ecstatic experiences of his youth—we are seeing it enacted and remembered. The experience is poised brilliantly on the edge between recollection and enactment, simultaneously in the present and the past, the Professor both young and old in the same moment.

DIVE is a spectacular new creation that deserves to be heard, running every day except Monday until August 9th , at 8 pm every night except Sundays (which are matinees) at the Array Space, 155 Walnut Ave. 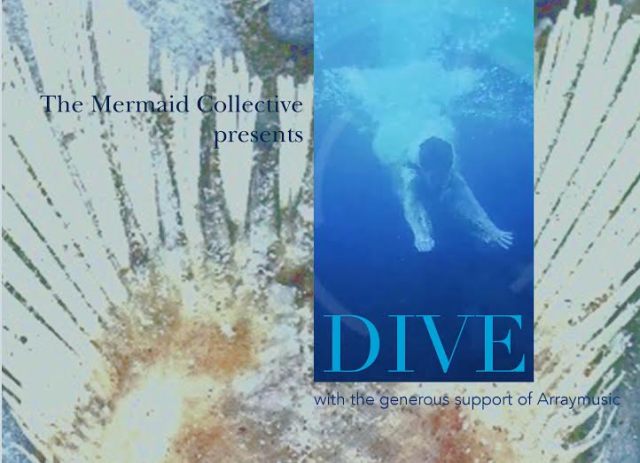