There was more drama in this recital than any recital I can ever recall.  Karita Mattila assumed several roles, in several distinct voices in her concert tonight at Koerner Hall in Toronto as part of the Toronto Summer Music Festival.

It’s almost exactly a year since the biggest coup of last year’s TSM, namely, Sondra Radvanovsky’s concert.  Mattila’s concert is a perfect follow-up for Artistic Director Douglas McNabney, and surely a highlight of this year’s Festival.

One would not usually think of the broad range of sounds as a good thing, if it weren’t abundantly clear that Mattila is an artist of rare intelligence, exploring sound masterfully.  I have to think she sees her voice in a kind of transition as she prepares to undertake Kostelnička.  She is now in her mid-50s,  transitioning to a more mature kind of role (for instance Kostenička, who is older and sung in the mezzo-soprano range) as opposed to Jenufa (the young soprano role), a role she’s sung previously. 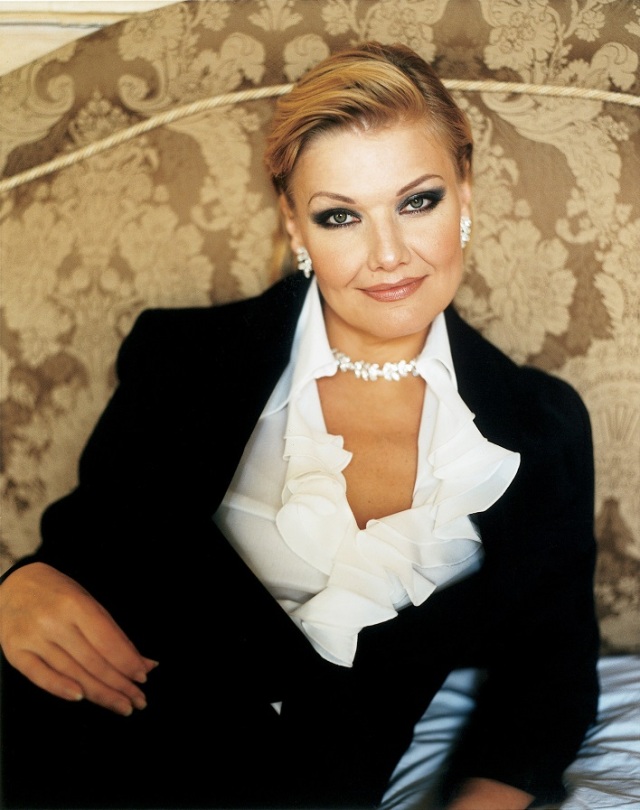 For parts of the concert we were listening not just to low notes but a voice blended with a great deal of the lower register mixed in, even on higher notes: the way one might sound as a mezzo-soprano.  And towards the end, we heard something different, as her youthful soprano sound put in an appearance singing Richard Strauss.  Obviously she can still sing this way –with the lighter colour that comes from using the high register without so much of the lower one blended in—but recognizes that the darker colour is more appropriate.

Or to put it another way, –and excuse me if I have to be negative for a moment—when Placido Domingo undertakes the baritone role of Giorgio Germont in la Traviata a generation after having sung the tenor role of Alfredo (Giorgio’s son), it is hugely frustrating to still hear the tenor colour, in a singer who has changed only in his loss of his top notes, but not in his essential timbre.  It sounds all wrong to my ear. What I realize tonight is that what Domingo would have to do is undertake something as bold as what Mattila seems to be doing, which is to make technical adjustments.  It is not enough just to sing lower notes, but one must sing with a different technique so that you acquire a different colour throughout your range, which is nothing less than the proper colour the composer would expect.  (end of rant)

The programme gave us three languages, five composers, nineteen songs, all strongly supported by pianist Bryan Wagorn.  Mattila can be playful & fun, or tragic& intense.  The Brahms songs to open were extremely accurate, a bit on the histrionic side, but gorgeous to hear.  The Duparc set that followed were suavely executed, flowing easily, even if we were again in territory that was more extroverted than what one usually encounters from such songs, both in terms of the voice and the physical presentation.  The songs from the two Finnish composers were especially dark, yet seemed especially congenial to her, the sound she made being especially congruent with her body, without any sense of effort or conflict in the production of the sound when she was singing in her native language.

When we came to the closing quartet of songs by Richard Strauss, it was as though a veil had been lifted, and indeed Mattila emerged as from a dream.  This was the soprano, the youthful sound. While almost the entire concert was pitch-perfect, there had been times that the singing was emotionally remote, even austere in the darkness created, the roles assumed.  Were these understood by her as part of her preparation for the lower roles? Or perhaps she simply loves this music, as she seems to get inside them completely with her entire being.  But I would assume that her vocal health requires that she use her whole voice.  And delightful as the first three Strauss songs had been, she kicked it into a higher gear for the last song, “Frühlingsfeier”, as much pagan ritual enactment as mere song.  The abandon with which she threw herself into this delightful piece brought the house down.

Towards the end of the concert we got a glimpse of her sense of humour, as she let the mask slip, possibly because she was now relaxed in the Strauss, singing in a fach and a style to which she was accustomed.  For the first part of the concert she was far more serious, more intense in her portrayals, whereas at the end it was as though this was closer to the real Mattila.  But I am being presumptuous, as I am not sure who that is, as she seems to be boldly inventing a new version of herself.  Throughout, though, it must be said that there was more facial expression, more gesture, more dramatization than I am accustomed to in a song recital.  But she made it work, creating some electrifying moments.  I have never seen such a kaleidoscope of voices in one recital.

This entry was posted in Music and musicology, Opera, Personal ruminations & essays, Reviews. Bookmark the permalink.

2 Responses to Karita Mattila at Koerner Hall: personalities on parade