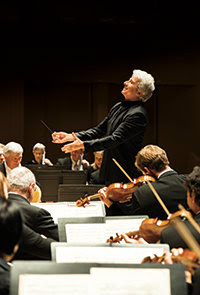 One of my favourite things about Toronto Symphony concerts is the steady stream of gratitude in the speeches that usually precede performances.  While opening night may be weighed down with ritual, the language was sincere, tonight’s season opener at Roy Thomson Hall offering more reasons than usual to give thanks.

Music Director Peter Oundjian spoke of preparing to enter Juilliard to study violin, encounters with the two great violinists –both of whom served as mentors– namely Itzhak Perlman and Pinchas Zukerman on the path that eventually led Oundjian to the podium of the TSO.  This put the concert in proper context, as Perlman’s abrupt cancellation due to emergency surgery was followed by the fortunate substitution by Zukerman in the same work, namely Bruch’s 1st violin concerto in G.

I am certainly grateful. I first heard this work performed by Zukerman a very long time ago at Massey Hall, when we were all much younger.

My impression at the time was first and foremost a kind of visceral shock: that I’d never heard a violin sound like that.  Tonight I heard something similar from a more mature version of the violinist.  I can’t imagine how many times he’s played this concerto, but it flows out of him as naturally as the sweat on his brow or the air out of his nostrils.  Zukerman gets sounds from his violin that open up dynamic possibilities both loud and soft, changing everything. I was especially transported by the second movement and its elaborate dialogue between soloist and orchestra, Oundjian leading a particularly urgent & passionate reading.   For an encore Zukerman and the orchestra offered a soulful reading of Nigel Hess’s “Ladies in Lavender”.

Between the opening and closing items that were conducted by Oundjian, we heard one led by Resident Conductor Earl Lee.   This is that study in mentorship gone wrong, namely Paul Dukas’s tone-poem L’apprenti sorcier.   The piece could be understood as a study in gothic horror if it hadn’t been forever re-framed via Fantasia and Disney as something seen merely as the mickey-mousing for a cartoon.  But it’s so much more than that.  As I sat watching Lee I didn’t envy him, reminded suddenly of the young apprentice in the symphonic poem confronted by huge forces threatening to spiral wildly out of control: not unlike the players in Dukas’ orchestra. As the brave conductor faced an unruly orchestra getting louder and louder, i thought “better him than me”.

We began with a completely indirect invocation of youth in the first Peer Gynt Suite, one of the very first pieces I got to know as a small child.  I never stop being impressed by the bold clarity of Grieg’s writing, phrases that instantly invoke morning or mourning or the unforgettable grotesquerie of “In the Hall of the Mountain King”.  Oundjian led a clear reading building to its climax, a wonderful opening to the season.

The TSO will be back tomorrow to play a classic program of the three B’s Friday through Sunday: Bach’s Toccata & Fugue in D Minor (and speaking of Fantasia, it’s in Stokowski’s arrangement), Beethoven’s Fifth Symphony, and Brahms double concerto.