If you were to read Matthew Jocelyn’s biography on the Canadian Stage website you might be surprised.

Originally from Toronto and later based in France, Jocelyn is an internationally acclaimed producer and director of theatre, dance and opera as well as arts administrator and educator. He was the Artistic and General Director of the Atelier du Rhin in Alsace, France for 10 years. Under his leadership, he was responsible for establishing the organization as a major centre for theatre, opera and contemporary dance – the only multi-disciplinary artistic centre of its kind in France. In addition to his administrative and financial roles, he directed a number of productions at the Atelier du Rhin. As a result of his accomplishments, he was named Chevalier des Art et des Lettres (Knight of the Order of Arts and Letters), by the French Ministry of Culture in July 2008, one of the country’s most prestigious arts honours.

His professional credits also include: founding Théâtre de l’Autre Rive and Théâtre Des-Hérités in Paris; directing theatre, dance and opera in Europe’s most revered venues; guest director at Canada’s Stratford Shakespeare Festival where he received critical acclaim for the direction of Pierre Corneille’s The Liar (Le menteur) in 2006; developing and directing original plays, operas and translations in Canada, Switzerland, France, Germany and Brussels; and teaching at the University of Toronto, the American University of Paris, the Université de Toulouse-le Mirail and the Conservatoire National Supérieure d’Art Dramatique in Paris. He was appointed Artistic & General Director of Canadian Stage in February 2009.

We’ve seen a wonderful array of multi-disciplinary productions from Matthew Jocelyn, from brilliant talents such as Crystal Pite / Kidd Pivot and Robert Lepage. And yet it’s only now that we’ll have an opportunity to see Jocelyn direct an opera in Canada. Perhaps his biggest priority was in establishing & strengthening the company, building support before undertaking a modern opera. Jocelyn will direct a production of Phillippe Boesmans’ 2005 opera Julie, a collaboration between Canadian Stage and Soundstreams to be presented Nov 17-29 at the Bluma Appel Theatre.

I asked Jocelyn ten questions: five about himself and five about Julie.

I’d say both my parents were great influences on my life. My mother, because she was extremely non-judgmental and very free in her attitudes as to what people could do or be. And my father, well, because at heart he was an artist.

2-What is the best or worst thing about being a director?

The best thing about being a director, especially an opera director, are those moments in the rehearsal room with only a pianist and two or three singers performing for you; they crack something which creates a moment of truth for a character, which gives meaning to the music. It makes them sing what they’re singing that much better. It’s an incredibly fulfilling experience, being in a rehearsal room with singers.

The worst thing is when you’re not able to communicate an idea in a way that is helpful to the artist you’re working with, when you sense something that’s essential but aren’t able to find the words or the means through which to convey the message.

And I love to watch really good Italian cinema.

5- When you’re just relaxing and not working, what is your favourite thing to do?

To hike by the ocean.

I would like to think that my work as an Artistic Director is a reflection of both the ethical and aesthetic considerations that I bring to my work as a director, and vice versa. So that really, they reinforce each other more than anything else. Luckily, I am surrounded by a team of people that are capable of holding the theatre afloat when I’m in the rehearsal room.

I would add that I think it’s essential for both the team and the company and for the audiences at Canadian Stage, to understand that my perspective is always one of a working artist. I’m always very conscious of the artistry and the nitty-gritty of the craftsmanship that goes into the various projects that we decide to support and collaborate on.

2- You’ve directed Julie before in Europe. Tell us about this opera and why you wanted to bring it here, your first directorial project of an opera in Toronto.

Julie is an absolute masterpiece of a chamber opera. Philippe Boesmans is without question, for me, the most important opera composer in the world today. So the opportunity of doing one of his operas in association with Soundstreams, a company I greatly admire, was an exceptional one.

Philippe is also a very close friend that I’ve been collaborating with for more than 10 years, so it was an opportunity to continue to strengthen our artistic ties.

This production was performed in over a dozen theatres in France, Belgium and Switzerland, which shows the appetite the audiences have for this work.

3- Talk about why you place such a high importance on multi-disciplinary work in your offerings at Canadian Stage. 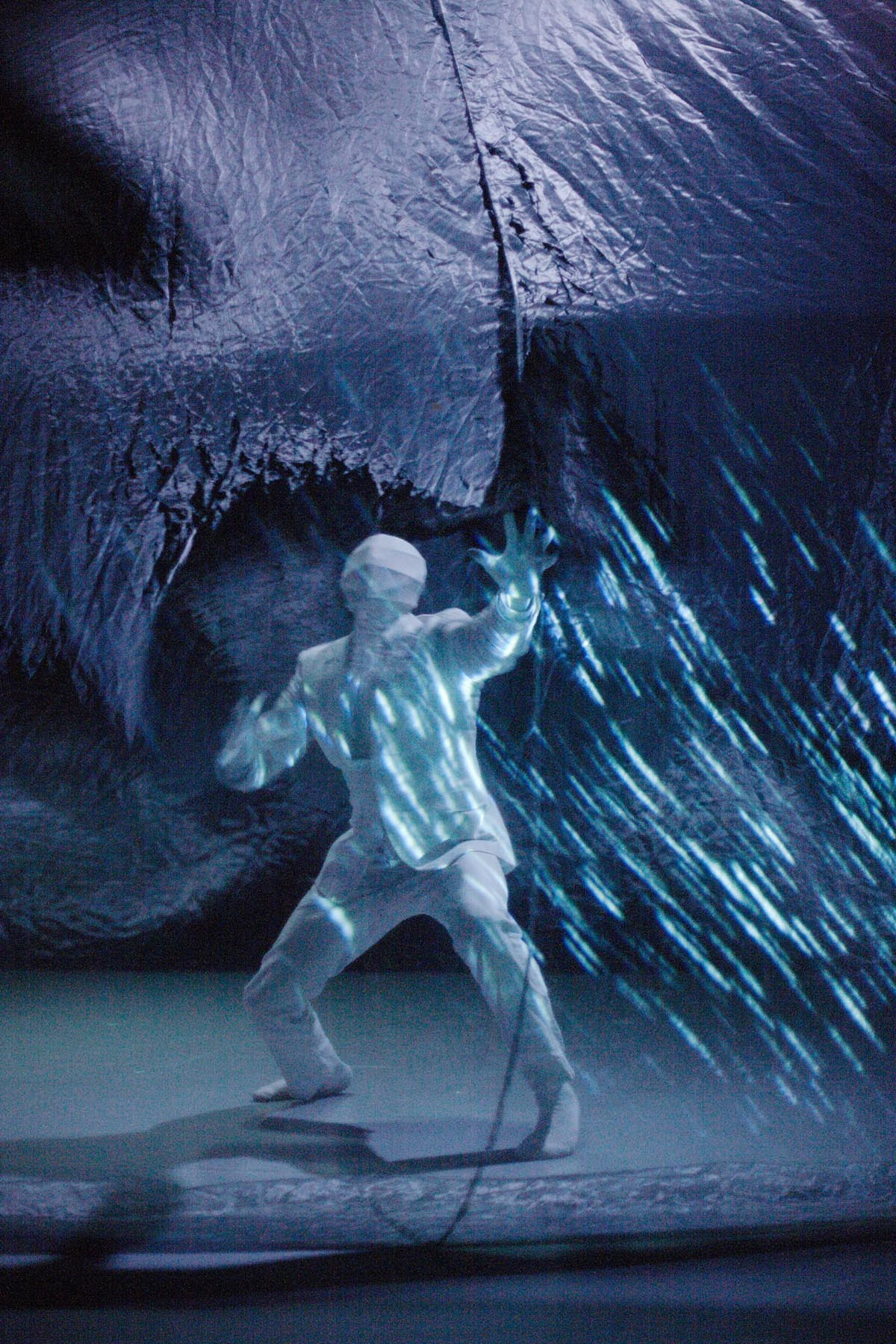 The Tempest Replica, presented at Canadian Stage by Kidd Pivot in May 2014 (Photo by Jorg Baumann)

What I place a huge importance on is the vocabulary that today’s artists are using in order to recount the world. It so happens that some of the most exciting artists – Crystal Pite, Michèle Anne de Mey, Jaco Van Dormael or Robert Lepage, Stan Douglas – are crossing over the disciplines. Because we are a contemporary performing arts company, what I’m really interested in are the most cutting edge artists and what their languages are.

I didn’t set out to say: “it’s got to be pluridisciplinary.” Many artists no longer feel restricted to simply being theatre makers, dance makers, or music makers in order to recount their worlds; they themselves cross over the boundaries. That’s what we want to share with the audiences.

4-Will we see more opera, whether directed by you or someone else, at Canadian Stage?

I hope we continue to see work that is relevant and fresh, and artistically demanding. If that includes opera, then fantastic! It would have to be chamber opera because there is no other conduit in this city doing this kind of work.

5- Is there a teacher or influence you’d care to name that you especially admire?

I’ve had a huge number of influences in my life. In learning my practice, the three people that had the biggest influence on me as a director were Patrice Chéreau, Mathias Langhoff and Jonathan Miller, all of whom I had the great honour of working with at some point.

I’ve been lucky enough to work with exceptionally talented and demanding artists and to see the work of hundreds of exceptional creators, like Philippe. All of that filters through somehow.

Philippe Boesmans’ Julie will be presented November 17-29, a co-production of Soundstreams and Canadian Stage, directed by Matthew Jocelyn at the Bluma Appel Theatre.