Soup Can HERETIC: not the usual martyr

Tonight I watched the latest version of HERETIC, Sarah Thorpe’s latest version of her play with the sub-title ”A Modern Retelling of the Story of Joan of Arc“. I was aware of her objective, to give an old story a new spin, and I confess I was resistant to this expanded version of Thorpe’s one-woman show that was previously presented earlier this year. 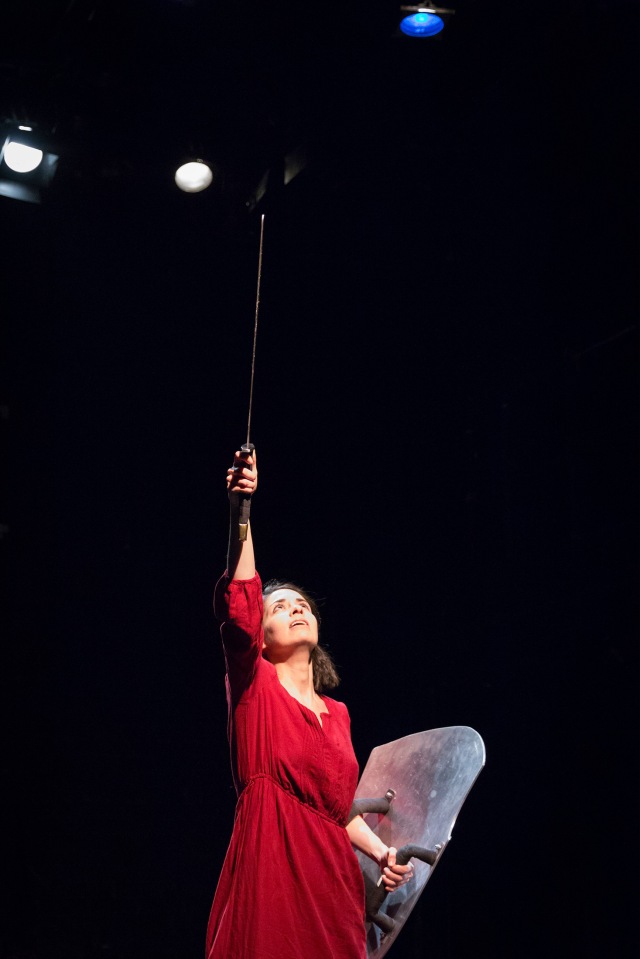 I was resistant because it’s a story that bothers me at a deep level. Joan’s story is simultaneously a miraculous tale of redemption and cruel punishment. While the first part—where the English are pushed back by a French army led by a bold young girl dressed in armor—is inspiring, yet she doesn’t deserve her eventual treatment. No I don’t like the usual way the story is told because it teases you and then breaks your heart. This is a tale that reminds us of the horrific discrepancy between the ideals of the spirit and the reality of human nature, of the worst sins committed by religion in the name of God. It’s stories like this one that might be the reason so many people fall away from their faith, as we question religion itself, wondering if humanity is really capable of living up to the ideals in the Bible. My usual way of reconciling that is by distinguishing between the ideals in the Bible and the reality seen in the conduct of religions. However inspired their origins, religion is where the murder & genocide comes from. Religion poisons the inspiration of spirit with something sadly all too human, the sick interface where Jesus gets slandered and sold out by child molesting priests and TV preachers. It’s not Jesus’ fault that Christianity is in trouble; with friends like these who needs the Romans (aka the ones who crucified him)?

Enter Sarah Thorpe and her company Soup Can Theatre. HERETIC tells a story I’ve known all my life, but in a genuinely new version. No I’m not saying you will shout “Hallelujah” and rush to a church; quite the contrary. This story is very much the no-bullshit version of Joan.  While it still includes inspiration, it also helps us understand the betrayal, reconciling the two.  As a result I was not freaked out the way I was watching Shaw’s play or the film adaptations I’ve seen.

Part of this is Thorpe’s writing, which includes her portrayal of a multitude of characters of both genders. At one point she is the executioner. At another –one of my favourite scenes—we get a portrayal of the Dauphin and his mistress in a dialogue, back and forth in complete cynicism. 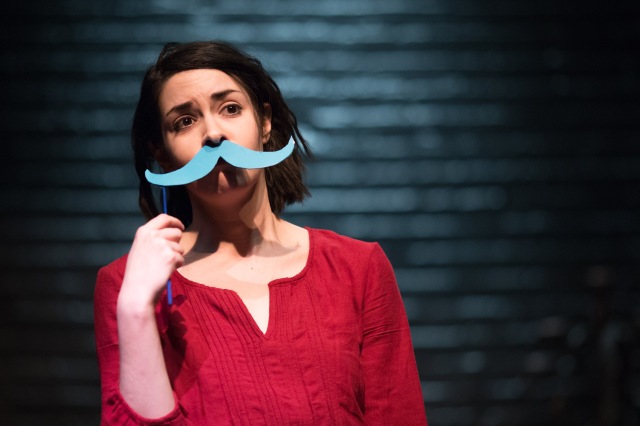 We hear from a priest who is her confessor, yet whose dialogue frames her life as though from an immortal perspective, the view from beyond the grave and beyond life itself. This perspective is the frame-work for HERETIC, and is a brilliant choice for the beginning and end, for although his language is judgmental, she refuses to buy into his criteria, refuses to accept his religious perspective. And that is the reason Thorpe as Joan is free of the claustrophobic enclosure of a religious perspective. Joan is genuinely modern in her refusal to be judged, a refusal to disclose her mystery to our profane and cynical eyes.

The choices in the mise-en-scene reinforce that contemporary angle. While the design may have been originally chosen simply because it’s pragmatic & inexpensive, it’s an inspired series of choices from Alyksandra Ackerman. As we begin, we’re looking at the sparsely decorated space at Theatre Passe Muraille backspace, with a series of chalk outlines on the upstage wall (at the rear) that resemble stained glass. At the best of times stained glass is cartoony, a clumsy symbolism arising from the expressive limitations imposed by the materials. We see the approach of cloisonism, the same style employed by Gaugin & his circle, echoing the outlines one sees in cloisonné or of course on a church’s glass windows.

Whether it was conscious or accidental, Thorpe steps into this space with big sticks of chalk, telling her story by drawing big chalk outlines on the floor, while walking in this same imaginary space, herself as a sort of icon, among outlines of the cross, of castles & crosses. In a very real sense, she strides among the symbolic icons as though the stained glass were incarnated & walking before us, herself an icon (later a saint) telling her stories of messages from other saints and from Jesus, and her eventual martyrdom.

And so the part that has always bothered me—the political priests—scarcely upset me in this telling, because it was clear that Joan is stronger and clearer than the corruption of these terrestrial politicians. They may drag her down with their limited sexist ideas of how a person should live (for instance, their insistence that she not wear pants): but that only helps make her immortal in the end.

Thorpe wears several hats, not just as writer, but also performer & co-director. Speaking of resurrection & rebirth, to me it’s as though Thorpe has brought this story back from the dead. If for no other reason than to struggle with the meaty ideas in this story, you owe it to yourself to see HERETIC¸ playing at Theatre Passe Muraille’s backspace until November 22nd.

1 Response to Soup Can HERETIC: not the usual martyr