It’s a story with many players, and not just those who play musical instruments. If it were the first time it would be more dramatic. But by now it seems that they’ve figured out how to do it, after many safe & successful tours.  The Toronto Symphony are going on a bit of a trip.

They’re shipping musical instruments, not animals, but they’re every bit as delicate, if not more so. If you google “violin horror stories travel” you’ll see that it’s not a simple thing for a musician to travel with their instrument.

So in other words, when the Toronto Symphony goes on a tour to Florida it’s a colossal undertaking.

I understand that for the tour of Florida in early January, 116 people will be on tour, including 94 musicians and 16 staff.  They’ll use three buses for the entire tour in Florida. Each bus seats 56 people. There will also be three cars or vans pressed into service for additional travel.

Hm, I wonder how much space is taken by timpani, violins, bassoons,  how much by timpanists, violinists, bassoonists, etc.?

The TSO will be playing six concerts, two different programmes, led by their Music Director Peter Oundjian, including Rimsky-Korsakov’s “Scheherazade”, “Wondrous Light” by Canadian composer John Estacio, and two notable Tchaikovsky favourites featured in December programs at Roy Thomson Hall. While I didn’t get to hear the “Polonaise” from Eugene Onegin, I was particularly blown away by the rapport between Oundjian and the orchestra in their interpretation of Tchaikovsky’s “Pathétique” symphony, a very powerful performance that makes an impressive calling card indeed.

The concerts will surely draw Canadians, both those who have either moved south and those who winter there. While Florida is often thought of in the same breath with “vacation”, it’s going to be a busy few days for the orchestra. 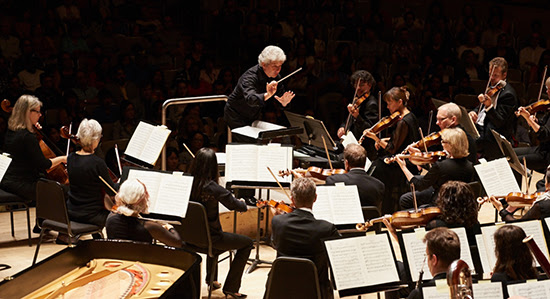