The DH Lawrence short story The Rocking Horse Winner is a recognizable image of modern life. I’m sad to say that I know people like this mother for whom no amount of money is ever enough, whose son’s mysterious gift (knowing which horse will win makes money for his family) offers her the possibility of wealth, even if happiness continues to elude her.

Tonight Tapestry Opera previewed an adaptation co-produced with Scottish Opera, libretto by Anna Chatteron and music by Gareth Williams, work of deceptive simplicity. I’m tempted to call it minimalistic in its spare writing that at times offers pattern music we’ve heard from composers such as Glass and Adams, firmly in the tonal realm. Sometimes we’re hearing waltzing rhythms apt for the fantasies of such a woman, sometimes sounds that are child-like in their simplicity. Every word comes through clearly in this production offered without surtitles.

The first line of the opera is enacted as a kind of significant form. Ava, the mother sings “Nothing is as it should be”, while she is seated at the piano, having displaced the piano player who was there earlier (and later).

What could be a clearer illustration?

[a thought i am adding the morning after, having tossed and turned with this: that the set by Camellia Koo and the stage picture is wonderfully complex. We have a piano upstage right with a piano player, and a small ensemble upstage left. Is the piano part of the set and the world of the characters, or part of the orchestra? The ambiguity is one of several undercurrents in the show, as though genuine feeling insinuates itself through a surface of lies, or perhaps a life without clear boundaries, leading to the confusion of roles and values]

The chord against which she sings will be heard at the end of the opera, closing the circle as perfectly as in such operas as Pelléas et Mélisande, another opera where both the main female protagonist and her music are static. She and her music resist change between the first and last time we encounter her.

There’s another moment like this roughly in the middle of the opera, when her son Paul asks her why she sings only sad songs. Not only does she resist this, but she bangs on the piano. Needless to say, her son –who had been under the body of the piano—is overwhelmed with the sound, and scared off.  I don’t know if this is something in the opera or something added by director Michael Mori, but it’s unmistakeble in its simplicity.

The house – which is like a perverse Greek chorus, giving vent to her materialist fantasies—is enacted as The House: a group of four singers prodding her like a sick superego. I had wondered how the story would make the transition to opera, given that fiction will speak to us quietly on the page, but collides with the blatancy of theatre. Putting something symbolic onstage may fail horribly. This is where opera can help a text overcome the resistance of an audience. In the story it is the unspoken message that “there must be more money”, made explicit in the words sung by The House. It may be obvious (like the banging of the piano that terrifies the boy, as i mentioned) but that’s how opera works. I’m glad to see a score unafraid to make use of the simplest techniques of opera, working exactly the way opera is supposed to work. I’ve seen recent pieces in Toronto that are influenced by film & spoken theatre, becoming too subtle, too unwilling to approach the blatancy that opera requires.

I was pleasantly surprised by what I saw & heard in this preview. I’d read something in a press release telling me that the boy was to be made older than in the DH Lawrence story, a prospect to make me shake my head sadly at an apparent lack of faith in the original. But when I saw the show tonight I wondered if they found their way back to the original story. We can’t really tell how old this boy is. 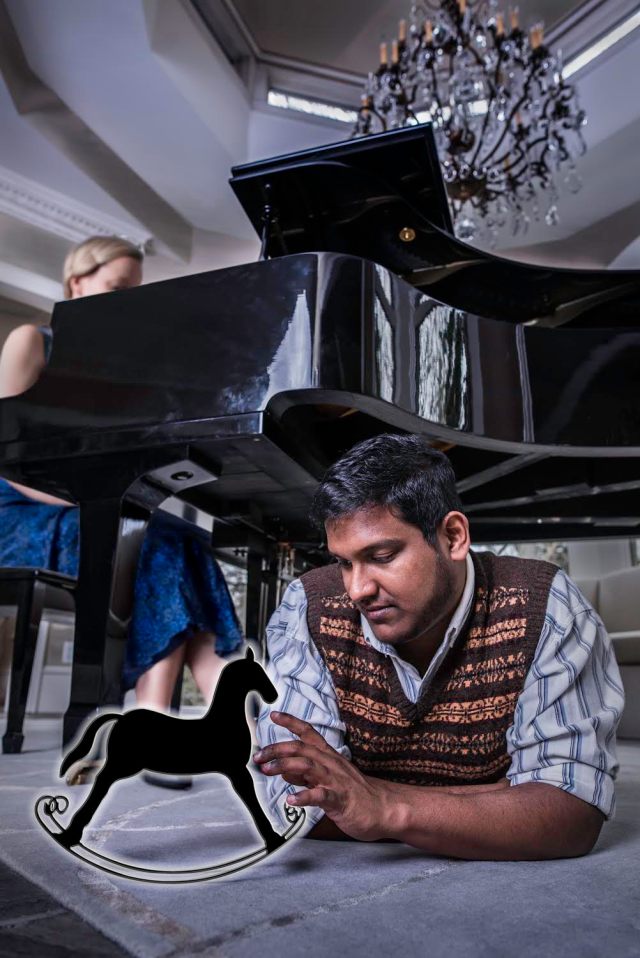 Of course he’s played by an adult, namely Asitha Tennekoon, in an intensely obsessive portrayal. I feel sad that this is even an issue. Nobody blinks when we put a 40 or 50 year old soprano onstage to play Butterfly, a fifteen year old. We accept people singing their stories in opera. It’s not a great leap to go from there to accept this man playing a boy, especially when he does such an effective job. The character dynamics between mother and son as Lawrence wrote come through beautifully in this take on the story.

Carla Huhtanen enacted a fascinating mix of frailties as singer, actor and even pianist. Ava isn’t a very likeable person, yet I was moved, able to understand the boy’s love of his champagne-drinking mom.

At an hour the opera is the perfect length, the drama building gradually. Keith Klassen as Paul’s uncle and Peter McGillivray as Bassett (who is something like a butler or teacher), play vital parts in framing the story while helping to show us Paul’s special talent. Jordan de Souza led a small ensemble that were always supportive, never covering the singers, making a great case for Williams’ setting of the libretto.