Let me first explain myself, why I’d admit (or even boast) that I’m a cheap drunk. Anyone wanting to cut to the part about the beer and avoid the theoretical talk, please skip down to the pictures.

Our culture associates the consumption of alcohol with the rites of passage leading to adult-hood, whereby we prove or fail to prove ourselves. Drink a lot and you’re a man, right? (plug in the appropriate gender- and culture-appropriate descriptors and epithets as needed).

The usual assumption is that sophistication and experience, possibly in the company of maturity, are more or less parallel, while naivete and inexperience, encumbered by youth, stumble along, clutching one another for mutual support. That’s the conventional wisdom.

Yet I am a long-time advocate of innocence, Pollyanna rejecting the trappings of wisdom even as s/he seeks a kind of enlightenment. Those of us hoping to quiet the mind may mistake alcohol for a pathway to nirvana. Before entangling you in too many contradictions, let me simply say—mangling a bit of Shakespeare in the process—that the fault lies not in our contradictory goals (such as the achievement of nirvana and the quiet mind, amidst too much stimulation) but in our logic that can’t handle contradiction & complexity. A child regularly expects to be dazzled and overwhelmed, whereas those of us chasing PhDs and assorted academic /professional laurels, may assume that someday we may achieve clarity, like the pompous teachers we recall. But this is an illusion, the clarity being a performance rather than real wisdom. Life is full of contradictions, not clear like Bauhaus but messy and shadowy as Rembrandt’s chiaroscuro (a word I love as much for its wacky phonetics as its intimations of things I can’t quite see or fathom. I am reminded suddenly of Professor Douglas Chambers at Trinity College, whose lectures were themselves a bit impenetrable in their verbal chiaroscuro, parts of his discourse eluding me like heads ducking into the shadows). In emulating the innocent child, the student looking up at the light rather than the expert talking down to his followers, I model an attitude. A cheap drunk? This is one who is no hardened drinker, eager to be moved-delighted rather than callused and impervious to sensation. It’s the reason I laugh too loudly at some shows, but also cry uncontrollably. Doug Chambers also used the word “sensibility”, to speak of an attitude celebrated by the Romantics that has resonance for me to this day, a readiness to feel and a preference to drop my defenses, given that those defenses may tend to prevent or even preclude joy.

And of course this sounds so pretentious that you’d be right to say “get that man a drink” (and anyone wanting to scream “S.T.F.U.”simply stopped reading. One of the great things about social media is how we’re all preaching to the choir. Anyone who disagrees would simply close the page and go elsewhere).

Friday was a vacation day, and a morning after. I’d seen Die Fledermaus and stayed up late writing about it, prolonging the sensations (I wasn’t kidding when I said I was star-struck in the review…) even as my caffeinated brain refused to let me go off into sleep even at 2 a.m. Next morning’s breakfast had included eggs, bacon, sausage, ham, cheesecake and scotch. After a walk to the grocery store, it was time for yard work, dealing with a mucky pond (speaking of chiaroscuro). We’d had our moments of hedonism, balanced with the walking and shoveling.

We needed to re-balance with more hedonism.

John Lennon might have said “beer is the answer”, or perhaps he did when he was young.

Hanging around home I turned to something I’d purchased from the Beer Store at the instigation of a very friendly & capable young sales agent (i will thank her next time i see her by buying more of the same product). Knowing that I had a guest from abroad, I was advised to buy a sampler, giving us the makings of a beer tasting, the ideal way to relax on a backyard patio after cleaning the muck out of a pond. Muskoka Brewery has created this fascinating box of fun & games, their SURVIVAL Sampler. Six beers, two bottles of each. 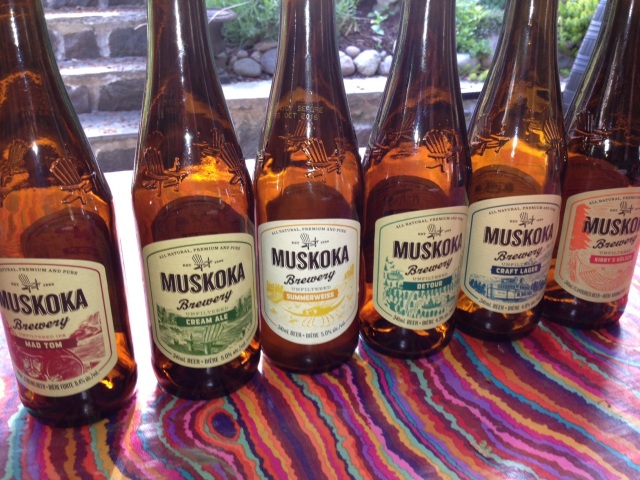 I had opened the pack and then shoved them into the fridge without really paying close attention.  I had noticed that wow there were several different varieties.

Now?  I grabbed the first one to come to hand. Hm… Mad Tom. What a curious name for a beer. It was the closest and the bright red caught my eye.

What we then chose to do, as I looked more closely at the box, was entirely an innocent exercise, as we hid in the shade with beer. We took six bottles, one of each type, and, dividing each in two (a medium sized glass for each of us from each bottle), proceeded to rate them. As we’re going to hear Stravinsky’s Sacre du Printemps tonight with the Toronto Symphony, (aka “Rite of Spring”) you could call it a “Rite of Survival” for our SURVIVAL Sampler. It was only after trying a couple that the idea of a comparison emerged, a tasting exercise. For me, the more innocent activity isn’t tasting but drinking, consuming.

It’s especially funny in light of where we started, our friend Mad Tom.

But more about Tom in a moment. Let me simply identify the survival six, in their “Survival Sampler”.

What the Survival Sampler box tells you

So let me take you along for our taste-test.

Mad Tom happened to be the strongest beer of the six. I wish I’d known, but maybe that’s just it. It was a gentle echo of the mystique of Brador, the epic beer of my youth that at one time you couldn’t get in Ontario. Speaking of rites of manhood, traveling to a different province was once necessary to get a stronger beer. Later we could get things like Black Ice to name a strong beer that I used to consume regularly. Black Ice is just over 6 % (regular beer = 5% while light beers are usually around 4%) but Tom is stronger still at 6.3%.

But thirsty people sitting down to their first beer after yard work may have trouble calibrating the strength of their beverage, especially if they inhale their half of a Mad Tom in one mad gulp.

Next up was the oddest of the six, something called “Kirby’s Kölsch”.

They tell us it has a hint of peach, which I didn’t mind. But it’s not like the other. Aha, I see how tasting and comparing all these beers may lead one from the realm of innocence into something like sophistication, as I googled the word “kölsch” to try to understand how this brew is different. Ah but that’s something I did the next day (writing), trying to recollect this process from a sober (and hungover) vantage point.

In all honesty, yesterday? I expected that I might write something that led parabolically into a drunken rant, as I became wackier and wackier. Instead of (say) Diary of a Madman which becomes progressively less coherent, it would be an irrational stream of consciousness to match the eventual stream of something else when I went to the bathroom, to return the brew(s) to the source.

Let me simply say that KK was not universally loved like Mad Tom, with the result that it would end up at the end of the rating of 6 bottles. It’s hard to rate things when your brain is a moving target, your taste-buds changing every few minutes. You might enjoy trying this yourself even if it’s less an academic – scientific thing and more of a parlour game. I think KK would have done better had it not followed the unassailable Tom.

The third bottle to be sampled was well-received as the first, the Muskoka Cream Ale. We were off in a reverie of ales, as I recalled how I’d begun my undergraduate pub life drinking Molson Ex, an Ale drinker who also enjoyed many other ales (hmm was Brador an ale?), before morphing into the bizarre dilettante who now sits at his laptop, recalling his drinking yesterday. This was to be #2 in our list, likely the best tasting but only edged out by Tom due to his hefty alcohol content.

Size matters, and never let anyone tell you differently.

Then came beer #4 and how apt to see something called DETOUR… I recognized even before I opened it that yes we needed a bit of a detour because we were getting hammered pretty fast in the afternoon heat.

And so I went to grab something from the kitchen to eat. We hadn’t eaten since breakfast (the afore-mentioned eggs, bacon, sausage, ham, cheesecake and scotch, plus tomatoes, strawberries, toast and coffee), admittedly a feast stretching from 10 to 11 am.

As we sat lunching at 4:30 pm, looking but not touching the Detour, as we took a bit of a non-alcoholic detour, we wandered off the path. I thought back to Muskoka, a place a bit beyond my family’s price-range, where a couple of my classmates had owned properties, a place giving its name to an iconic chair that appears on the label of the beer (see?).

We had company in the yard, between the four different chipmunks (meaning chipmunks of different size who circled around as though they wanted some of our beer), assorted birds & squirrels, the breeze and the obbligato car-horns (“obbligato” as in unavoidable and undeniable in our urban setting). Salami, swiss cheese, and rye bread gave us a bit of a break and put something other than beer inside us.

And then it was time to get back on the road with the Detour, if you will excuse my apparent contradiction. Wow, this has to be the best light beer I’ve ever encountered. Being a bit on the drunk side didn’t hurt. This is one of the best times to drink a light beer, like the smaller personal risk for the gambler seeking to stay in the game without going bust.  Ah but there’s the risk. Like the smoker consuming twice as many light cigarettes than the normal ones, we inhaled the light Detour, losing any advantage it might have conferred upon us.

Number five was Summerweiss, another departure. We were still in the brewer’s realm but this tasted like none of the others, an edgy and quirky taste, wacky with its wheat flavour, somewhat sour and truly unlike any other beer. But it’s refreshing all the same.

Our last bottle was the Craft Lager, possibly a brew beyond the capabilities of our taste-buds at this point. Were we now only susceptible to high alcohol? I found it bland, especially compared to the quirkier flavours of Summerweiss. If we did this the way professional tasters did it –a little taste and spit it out—maybe we’d have a different response but this was primarily fun fun fun, a recreational activity. We weren’t tasting, we were drinking.

I have to recommend this. We had two people drinking and discussing as we rated our Survival Six, but this could work for many more: so long as you have lots more beer to compare. For us this was an innocent activity, not really about identifying who is good or bad, so much as a fun way to enjoy some beer on a summer’s day.
http://shop.muskokabrewery.com/

This entry was posted in Food, Health and Nutrition, Personal ruminations & essays. Bookmark the permalink.

2 Responses to Rite of Survival: a cheap drunk’s view