Eat That Question: Frank Zappa in His Own Words

I can’t help thinking that composers are sometimes badly appraised in their own century.  I watched a documentary tonight that inspired me yet pained me, because it’s a nagging reminder of the undeserved obscurity enjoyed by Frank Zappa, and of his untimely death. 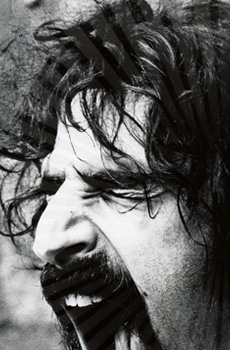 When I first encountered Zappa I loved his music right away, blown away by the best rock music I had ever heard (and it’s still the most interesting almost half a century later).  But he is much more.  I’m reminded somewhat of Leonard Bernstein, a composer who enjoyed success in both the serious and popular worlds, and like Zappa a composer strongly influenced by Igor Stravinsky.  But Bernstein never had to overcome the negative assumptions of those dismissing a long-haired guitarist, which might explain the comparatively higher reputation he enjoys compared to Zappa.  If you can see past the stereotype, you might consider something that I believe: that Zappa is a great composer.

Watching Thorsten Schütte’s 2016 documentary Eat That Question: Frank Zappa in His Own Words at TIFF gives a fair glimpse of the musician over the course of his life.   Yet there are not very many performances of his music, because we are mostly listening to him speak.  We encounter the political wit of Zappa – the funniest satirist after Tom Lehrer—yet he’s much more.  We hear him speak of his process, of his influences, of his beliefs and philosophy.

I am reminded of the way foreigners sometimes have greater objectivity, in their ability to recognize talent, whether it’s the way the French put Hitchcock on a pedestal, or saw genius in Jerry Lewis.  In Europe Zappa is appreciated much more thoroughly.  Zappa is seen being adored by the French (yes they did it again), and the Swedes and the Czechs.  We see Zappa meeting Vaclav Havel.

In the classical realm there are moments suggesting recognition, such as a glimpse of him with Pierre Boulez, a rehearsal with Kent Nagano.  In fact when I watch this following clip – from the Tonight Show with Steve Allen—I am reminded of many new music concerts, except what’s missing is the tone of ridicule. Zappa was always a man with a sense of humour.

We see several incarnations of the composer / performer, sometimes singing, sometimes strumming, sometimes pontificating.  For such a brilliant man he’s rarely given the kind of respect he deserves, as there’s often a note of disbelief, as though longer hair somehow sucks out your brains.  He is a very humble man, happy in his own skin and never terribly concerned with his reputation.  Crazy as our world sometimes is (and this has been a weird couple of weeks), the film is a reminder that we may be making progress, compared to what we see in this film (although the Europeans  clearly get him).

Alas we see the arc of his life-story, a tragically brief arc at that.  He died just before his fifty-third birthday.