When I was a child I was introduced to the singing of Florence Foster Jenkins, on a record called “The Glory (??) of the Human Voice”. 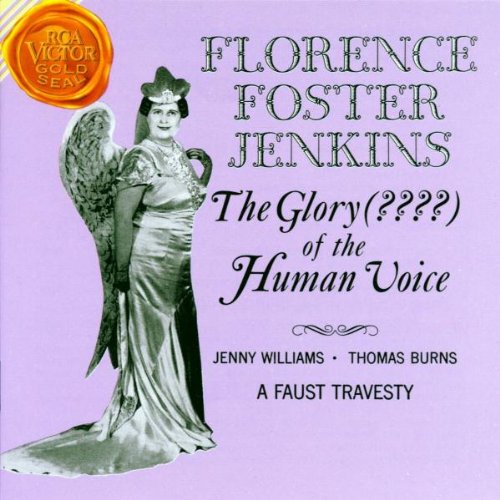 There was a kind of illicit pleasure in listening to her singing, because

Ours is a society of sophistication. Whether you paint or dance or sing or play golf, we aspire to do these things well, and usually are aware of our handicap / limitation.   When we fail to perform well we suffer, we are ashamed, we have stagefright.

The astonishing thing with FFJ: how much conviction she seemed to bring to her singing.

The great mystery with FFJ: did she sing this way without any inkling that she was not successful? that people were laughing?

Usually singing teachers discourage singers from undertaking repertoire that is beyond their capabilities.  Indeed, a teacher who does not stop a student from over-reaching can damage a singer’s confidence and even ruin a voice.

And so, in our adoration of the virtuoso, our aspiration to excellence both for ourselves and what we enjoy, the Florence Foster Jenkins mystery is profound.  Did she know that people laughed?

Florence Foster Jenkins is Stephen Frears’ new film with Meryl Streep as the singer and Hugh Grant as her devoted boyfriend, an actor who didn’t quite make it.  Big Bang Theory’s Simon Helberg is FFJ´s pianist Cosme McMoon, another virtuoso who didn’t quite make it.  I always thought that the pianist’s bizarre name suggested that it was a pseudonym, a good piano player who refused to be identified, but the story we get in Frears’ film tells quite a different sort of story.

I can’t help thinking that this might be the most profound meditation upon performance and art that I’ve yet encountered, precisely because, as far as FFJ is concerned there but for the grace of God, could go you or I.  Some of us are more talented than others.  I grew up in a household with a stunning voice –not my own but a sibling—that has forever got me thinking about such things.  We can be very harsh critics of ourselves.  FFJ is the other extreme, perhaps someone who was overly enabled by loving and supportive friends & loved ones.

How much did FFJ really know?  I think this film offers one set of answers, even while displaying other possibilities.

Along the way we also encounter a very enlightened film about relationships, about unconditional love.  For most of the film Streep is doing a remarkable impersonation of the messed up interpretations of opera arias I recall from childhood, although we get a tiny glimpse as if from FFJ’s perspective: as Streep suddenly gets to sing in tune, a poignant moment near the end.

In this electoral campaign where one of the candidates has ridiculed a disabled person’s speech, I can’t help feeling uncomfortable about the topic.  In the darkened theatre I confess I giggled a few times even as I watched Grant as the boyfriend express outrage that anyone could laugh at her.  Why is this kind of laughter okay and sanctioned by our sophisticated attitudes, while we disapprove of what Trump did?  We go into a church or a school and when the little children in sunday school or kindergarten sing out of tune we think “aw isn’t that adorable” and withhold judgment.

But we judge ourselves harshly, because we expect too much of ourselves.  Competence and sophistication seem to be the rocks upon which we wreck ourselves as we age, as we become progressively less competent. For some reason we forgive some, while judging others harshly.  Florence Foster Jenkins is a delicate examination not just of this quirky story, but of the predicament of every performer, aiming to be great and squirming in the presence of failure.