You think you know someone, what they’re all about, and what they really like. That can be true of your friends, or of famous artists, where they surprise you with a hidden dimension, an unexpected interest.

I thought I knew Itzhak Perlman the violinist. But I clearly only know part of who he is.

If you’d asked me about violinists I’d name a few that I admire, the ones from the past like Stern or Oistrakh, the ones currently playing such as Anne-Sophie Mutter, Nigel Kennedy, Midori, Zukerman. I’d eventually admit that the tone I always found the most attractive came from Itzhak Perlman.

And when I heard about an upcoming concert, I discovered a great deal about Perlman that I’d never suspected. November 22nd Perlman’s coming to play with the Toronto Symphony at Roy Thomson Hall, a concert titled “Itzhak Perlman’s Cinema Serenade”. When I googled to find out more, wondering if he was changing his direction in his mature years, I was astonished to discover that the man has long had a whole other side I had never suspected. 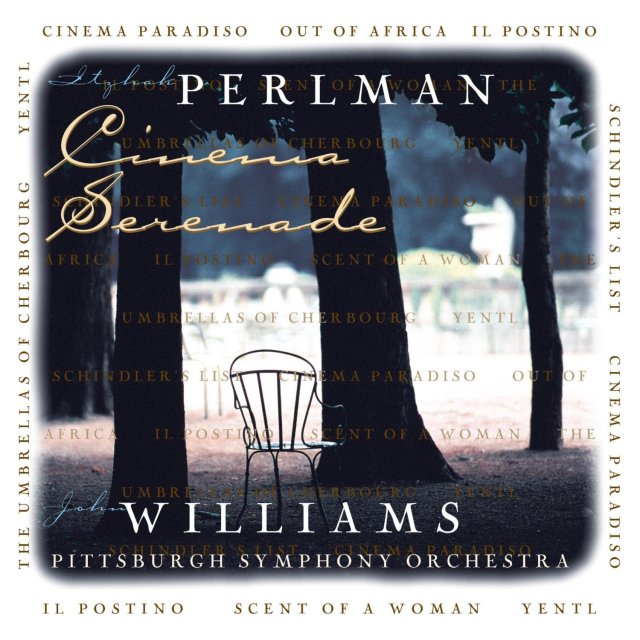 John Willliams, the film-music composer & long-time conductor of the Boston Pops conducts both CDs (the first with the Pittsburgh Symphony, the second with the Boston Pops).

Now don’t get me wrong, this isn’t easy music, not by a long shot. But the thing is, Perlman has long been leading a kind of double life. In addition to his classical work — in concert halls playing concerti or in recording studios making astonishing recordings of those same serious works—Perlman has been involved in the creation of film music.  I never knew that it’s Perlman who plays in the soundtrack of Schindler’s List.

This is not to be confused with any sort of cross-over, like the bizarre Broadway musicals you sometimes get when an opera singer tries to let their hair down and sing popular music instead. Nope. Perlman is actually doing what he does in the concerti. In any of the concerti by Mendelssohn or Bruch or Tchaikovsky, yes yes there’s passage work and all sorts of fussy parts that seem designed to make you jump through a series of hoops: but that’s not all. In each of those concerti, the composer has the good sense to write a beautiful melody and hand it to the soloist. And what makes Perlman’s performances so special is not that he can execute fast arpeggios and difficult passages – which he can, make no mistake –but rather that when a simple melody is written, that Perlman knows precisely what to do with it.

One of the most enjoyable things I get to do in this space is to quote beautiful passages to illustrate my points. Exhibit A is from Cinema Paradiso.

Please note that the excerpt on the CD (unlike this clip) is conducted by the composer, John Williams.

The second CD has even more examples that I love very much, that I think any film buff would enjoy.  We begin with that most haunting of melodies, David Raksin’s “Laura”. My favourite cut on the CD is a suite from Robin Hood, meaning the award-winner from Korngold rather than Michael Kamen’s more recent –but also quite excellent—score. One of the things I love to do when teaching film-music is to take us through the film, noting the way that the themes change as the story goes on as elegantly as if we were in a Wagner opera, not a swashbuckler of a film, so this one is especially moving for me. Wonderful as the melody is, Perlman takes it up an additional notch in his stunning reading.

November 22nd I’m looking forward to hearing some of these tunes in person with the TSO. But the CDs are a completely hypnotic alternative.

This entry was posted in Cinema, video & DVDs, Music and musicology, Reviews. Bookmark the permalink.