I am such a lucky guy. I live in this country where we can march in protest without fear. Today and always I am so happy to be a Canadian. And while it’s rumor rather than fact at this point, we’re hearing that the new American President will be cutting support to the NEA, a mere $146 million dollars in a country of 318 million persons. In Canada we have the Canada Council, that offers over $180 million in a country roughly one tenth the size of the USA: and on the verge of hugely increasing rather than slashing funding.

Among my many blessings are the unsolicited packages I get in the mail, usually opportunities to review new creations for the blog. I’ve been listening to one such treasure, a CD called Canadian Panorama. I need to write about this now because the CD launch concert is two weeks from tonight.

The Winds of the Scarborough Philharmonic Orchestra, conducted by Ronald Royer, commissioned the seven Canadian composers on this CD, who will be heard in the concert, notably including Royer himself.

Here’s a list of the composers & the tracks on the CD:

I’ve been playing the CD in my car.

The piece that stands out for me is precisely the one Royer might have known would catch the ear, namely his set of variations on a theme from The Magic Flute, especially when I’ve just seen the COC’s new production of that opera earlier this week. The tune is the duet between Pamina & Papageno in E-flat, already a great key for winds and a melody of great simplicity. Royer calls his composition “Travels with Mozart”, taking us—and this tune—through some of the foreign cultural influences that the composer must have experienced as a perpetual traveler. It’s a fun piece that bears repeated listening.

It’s apt that a new composition from the prolific Howard Cable closes the CD, a great Canadian composer and arranger who passed away just this past year in his 90s.

It’s a tuneful recording, a natural way to celebrate Canada’s 150th anniversary. Some seem more blatantly Canadian than others, as in the compositions that have a connection to a specific Canadian place: Eddington’s (Quebec), Cable’s (Alberta) and Meyer’s (the Maritimes), but these are all Canadian composers, performed by Canadian musicians. 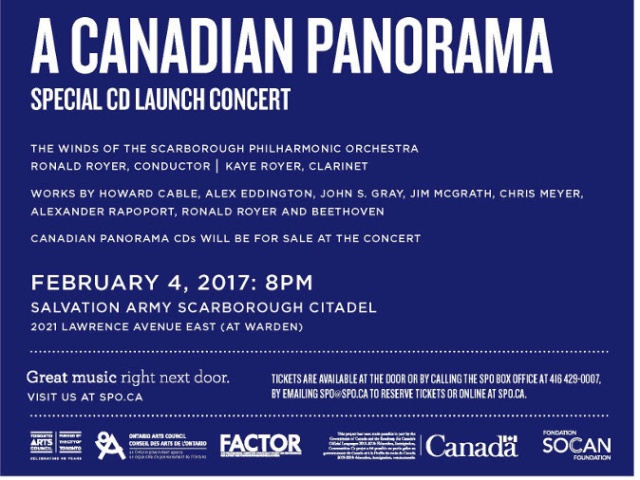