Posted on February 9, 2017 by barczablog

Chronik der Anna Magdalena Bach is the original title of the 1967 film by Danièle Huillet & Jean-Marie Straub, that I just saw on a new 35 mm print, courtesy of TIFF / Bell Lightbox, in anticipation of an upcoming retrospective of Straub & Huillet. 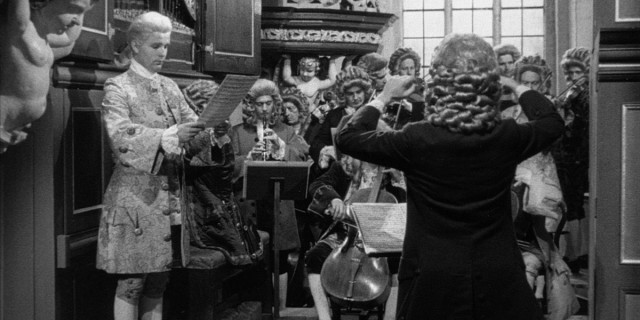 “Straub-Huillet made their first masterpiece with this account of the last decades of the great composer’s life, featuring glorious, direct-recorded performances of Bach’s music on period instruments.

A cinephile’s dream: a new 35mm print of a classic of modernist cinema, unscreened in Toronto for a decade. Chronicle of Anna Magdalena Bach stars the late virtuoso harpsichordist Gustav Leonhardt as Johann Sebastian Bach and Christiane Lang as his second wife Anna Magdalena, whose journal serves as the film’s narration. An account of the difficult last 27 years of the composer’s life, Chronicle places as much emphasis on economic and social factors as on character and incident, but cedes all to Bach’s music — lots of it, gloriously performed on original instruments and recorded with direct sound to ensure purity and authenticity of reproduction. (Paradoxically, Straub and Huillet insisted on period-specific performance not only for the sake of authenticity, but because at the time it was rare enough to be “new” and radical.) Chronicle achieves grandeur through the interplay of visual design and camera placement, the counterpoint of music and editing, of music and narration, the use of silence and interpolated images of nature, and the many performances of Bach’s music. “One of the most beautiful achievements in film history” (Martin Walsh).”

Straub & Huillet are the film-makers, but perhaps I could just as easily say “chroniclers.” Their 93 minute film reminds me of several paradigms, none of which is quite perfect to describe this unique bit of cinema:

Perhaps I should add: we are traveling in time. The film purports to take us back to the last quarter century of JS’s life, up to his death in 1750. In the black and white of this gorgeous new print, though what are we really seeing and hearing? The performances may be on the leading edge of performance practice for their time, but are antique compared to what we’re accustomed to hearing in 2017. Yes we do have Gustav Leonhardt and Christiane Lang as JS & AM Bach, complete with performances at the keyboard. Nikolaus Harnoncourt (the great conductor & scholar who passed away less than a year ago) also puts in an appearance –playing a prince—alongside his Concentus Musicus Wien, the band seen and heard playing throughout the film. Baritone Bernd Weikl, who may be familiar for singing Wagner (for instance in the Ring cycle from the era of James Levine in the 1990s), is one of the singers, everyone decked out in baroque-era wigs.

Perhaps the best evidence that Straub & Huillet were on to something is found in a 1969 NY Times review curtly dismissing the film.

“While this “Chronicle,” which had a single showing at last year’s New York Film Festival, is a testament to his ever-living music, it is, unfortunately, lifeless as biography.”
So says A. H. WEILER in April 7, 1969

Watching it today I’m inclined to think of it as a masterpiece, a work of art pregnant with meanings that don’t reveal themselves in a first viewing.

One of the problems a 1967 viewer might face is the departure from the recognizable genre. This is not how Hollywood would approach a great composer, and thank goodness. We meet someone who is struggling, who isn’t appreciated, who has children that die. AM reports –in passing—on the deaths of at least five of them, while telling us of other challenges faced by JS. And the whole time he keeps creating. This is a very different JS Bach, and dare I say it: the real JS Bach

Alongside the de facto text we have perhaps the most important testimony of all, namely
the de facto creations of JS Bach himself, including

A positivist might complain “but we don’t find out enough about the life of JS Bach”, which is more or less what that dismissive reviewer says. But of course he mistakes this film for a mere biography, missing the point completely.  Tonight I was pondering how JS Bach lives on. I had him on my piano yesterday, and again today, and the film inspired a very different sensation after this film than before. When I hear his music from Tafelmusik this Friday (including at least one of the pieces named above), the images of the film will haunt me.  We have the platonic ideal of the composer whom we know in our heads and fingers and throats, the one who we sing & play (as we have a “Shakespeare” as well),  brought to life as never before in this film.

There are several intriguing layers to the film that I look forward to probing further next time I see it.

Chronicle of Anna Magdalena Bach screens on Friday, March 3 at 6:30 p.m. as part of TIFF Cinematheque’s Not Reconciled: The Films of Jean Marie Straub and Danièle Huillet, running from March 3 to April 2. Curated by James Quandt, Senior Programmer, TIFF Cinematheque, this first ever Toronto retrospective assembles dozens of their features and short films, many of them to be seen in the city for the first time.