Today I had the pleasure of hearing the Toronto Symphony in an afternoon concert, repeating most of last night’s program. The energy is different in the middle of the day especially mid-week. The matinee extends a win-streak of wonderful playing with guest conductors over the past few weeks, as Andrey Boreyko seemed to know exactly how to inspire this orchestra.

The program of four pieces was augmented by a wonderful bonus:

Although not in strictly chronological order, the concert felt like a gradual trip to the past.  The newest piece on the program in its TSO premiere was Bélanger’s Sesquie, a two minute romp full of whimsy and broad gestures that made me giggle aloud. As the title suggests, the composer was having a lot of fun and thank goodness this was one of those times when the joke was totally intelligible. Bélanger seemed to be colouring with big fat crayons, employing a brass choir then an answer from the woodwinds, and something subtler still from the strings. What I think we’re seeing with these two minute gems is that the limitations of the commission –a two minutes fanfare after all—serve to inspire the composers rather than limiting them.

Christos Hatzis’s The Isle is Full of Noises was premiered about 4 years ago by the Orchestre Symphonique de Montréal as part of a Shakespeare-themed program, this piece inspired by The Tempest. I don’t know about you, but I love encountering program music where the composition is intelligible as an expression of the idea it is meant to signify. Hatzis begins with the sounds of human breathing, an activity that naturally comes first in this kind of organic sound-poetry. We work from darkness to light, from abstract to concrete, from disorder to order, as seemingly random or dissonant sounds organize and cohere in a buildup towards a melodic and tonal affirmation at the end. And just as Prospero’s island is sometimes a bit threatening but ultimately a safe place for good people and not so terrible even to those who are evil, so too with the sounds, that never threaten but do surround us safely. I can’t help feeling that for Hatzis –especially after his Juno-award (just a few days ago) for Going Home Star—the possibilities are unlimited. Much of the time we seemed to inhabit a sonic world reminding me of early Stravinsky –perhaps corresponding to his word “impressionistic” in the composer’s program note—as in The Firebird ballet score, but with the occasional addition of unexpected sounds from a different rule-book just to keep us honest. I was thrilled to see how well the audience received Hatzis’s music.

I am not cheating the proper chronology in portraying Liszt’s 2nd piano concerto as the next newest sounding piece, given that Brahms, who came later, always seemed to want to cheat the calendar and emulate a more conservative style & sound; more on Brahms in a moment.

Before I speak of Liszt, let me say simply that Lucas Debargue is an extraordinary and charismatic pianist. Yes, he played the concerto accurately as far as I could tell; as it’s not a concerto that I’ve ever played through—because I don’t like the music very much—I couldn’t tell during some of the thunderous sequences whether he was really playing it right or not. But the sound was magnificent, a big full sound whether in slow forte passages or fast ones. In the lyric middle section we heard an achingly beautiful sound, the legato dripping from his fingers. 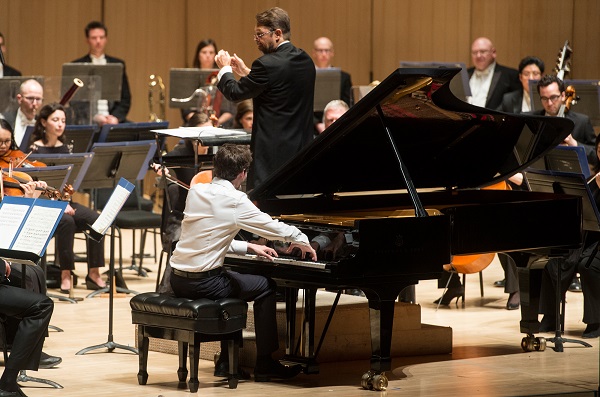 I said “charismatic” because a big part of his appeal lies in his body language, a head that bobbed so much it verges on self-parody, although when you play this well: you can move any way you like! At times he gave us that Glenn Gould style liquid body language, where he is channeling the music without regard for anything else, and totally in the moment of the creation. Boreyko met him halfway with a powerful sound from the orchestra. And I can’t help mentioning a magnificent solo from cellist Joseph Johnson, perhaps just a bit bolder in his playing after his showcase last week in the Schumann concerto, perhaps precisely the kind of payoff one would hope for.

After the interval came the most moving reading of Brahms’ 3rd Symphony that I have ever encountered. Boreyko’s approach was deliberate, understood in a very good way. The conductor’s baton was used to begin and end, but was set aside for the subtler places, namely the two inner movements and the conclusion of the symphony: where we had a chance to hear inner voices in a transparent series of solos. In the big moments the orchestra were wonderfully tight, very clear in their articulation. In the places where the orchestra pauses, Boreyko fully indulged those moments as though for a big collective breath. In additional to so much wonderful solo work in the brass, woodwinds & percussion, we heard exquisite yet restrained sounds from the trombone choir invoking the mystical implications of the instrument that Brahms likely sought, particularly at the end.  The TSO faithfully executed Boreyko’s lucid reading, a profound interpretation of this the most elusive and difficult of all of Brahms’ symphonies.