Tonight I was held captive by the eruptions of emotion in Joshua Harmon’s 2012 comedy Bad Jews, receiving its Canadian premiere production at the Small World Music Centre, in the Koffler Centre for the Arts, directed by Michèle Lonsdale-Smith.

Yes there are lots of laughs, but I can’t help remembering Robin Williams, the avatar of comedy made out of sadness. Happy people do not create comedy. Why are there so many great black and Jewish comedians if not because of their expertise in handling and articulating pain? 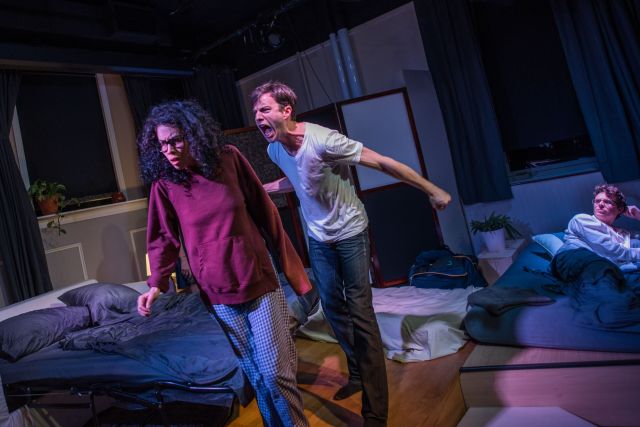 We meet Jonah and Liam, two brothers who have lost their grandfather, a holocaust survivor. Daphna is their cousin, and Melody is Liam’s Gentile girlfriend. In the immediate painful aftermath of the death, each of the three Jews struggles with their grandfather’s legacy, including one who would marry the cute blonde girl who isn’t Jewish, each seeming to assert that theirs is the most authentic way to live as his successor. While that may sound serious it’s the framework for painful laughter in the conflicting value-systems, the accusations and insults hurled at one another from a place of truth and authenticity.

I can’t help wondering how the four cast members held it together in the tiny Koffler Centre space, so serious, even when I was guffawing just a couple of feet away.

Rebecca Applebaum (Daphna), Daniel Krantz (Jonah), Kristopher Turner (Liam) and Julia Vally (Melody) pitched their voices without ever sounding like actors, without ever using voices that sounded trained or loud, no artificiality, no reminders of acting technique interfering with the perfect illusion.  And it helps that the writing is so fluid, the dialogue so truly human. We were in a living room surrounded by these embarrassingly exposed people from the first moment to the last. It was so real!  I even saw some private anatomical parts, shown inadvertently of course. They may have seemed uncomfortable with one another, thrown together as they were: but they never seemed to mind this audience of voyeurs staring at them with such indecent intimacy, let alone when we laughed at or with them.

It must be very hard for the actors not to giggle when surrounded by a laughing mob, aka the audience.

Applebaum was a driving force for the production. I heard that she was eager to play the quirky Daphna, the self-appointed custodian of Jewish tradition in this family. It’s fun watching the inevitable conflict with her agnostic cousin Liam, a slow motion train-wreck of a cultural  clash. Liam’s claim on the cultural hardware—their grandfather’s chai, treated as sacred by Daphna because he carried it through the holocaust–is pragmatic rather than religious. Jonah and Melody are mostly observers of the big debate, and at times seem likely to end up as collateral damage in the all-out warfare that ensues.

It’s so real, so true to family dynamics. The volume in the small theatre gradually ramps up as the passions are laid bare. But it’s totally real, and hysterically funny, even if I was surprised by tears a couple of times.

I feel sensitized to this kind of comedy from having watched a very funny film last night about a Jewish comedian, leading me to wonder about the nature of comedy. Anger and sadness are central to the film, and again it’s true for Bad Jews. Our own sadness leads us to recognize the universality of these situations, to see ourselves and/or our families up there on stage.  And of course that’s why we were howling with laughter.

Bad Jews continues until June 4th at the Koffler Centre of the Arts. See it if you can. 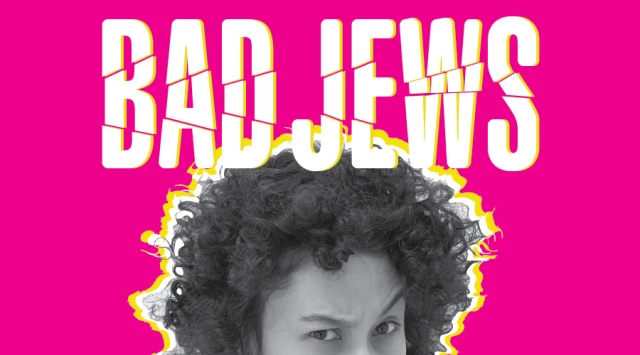