Forensic Composition, or when the script is like a CSI

That headline is dead serious and no joke.  I was brought in twice way back in the 1970s as a composer by directors looking with puzzlement at play scripts.  It would happen again later.  These formative projects changed the way I saw composition & adaptation, but my purpose here is to reflect on some of the first things I ever did, when I was young.

It needs to be said that every text composed for performance – whether musical, verbal or something else—is in some sense an enigma.  A singer or dancer or actor read a score or script as a set of instructions, that may or may not be explicit.  This may be due to the huge lapse in time. When David Fallis, the music director of Opera Atelier, looks at the score of one of the 17th century operas by Lully or Charpentier, there may be huge furrows in his forehead as he thinks about how he might approach one of these rarities: works that are so rarely undertaken as to represent an unknown idiom.  Shakespeare’s plays have relatively few instructions, leaving the producer to ponder how they want to approach the staging, the design, the music or dance.  This is usually a matter easily answered through a little creativity.

But sometimes the text may stop you cold in your tracks.

At the beginning of Tom Stoppard’s Jumpers, Dotty goes a bit crazy because the moon, once a source of romance and beauty, is now merely a destination for astronauts.  She sings a series of fragmentary bits from songs about the moon.  It’s a funny thing Stoppard wrote, but also a bit of a nightmare for the music director, seeking to show us Dotty rambling through a series of moon songs. Given the words, one has to work backwards to a musical score and an eventual performance.

How can one shine on a blue moon that’s a harvest moon that must be moonglow?

(if you take my meaning…)

I was asked to help the singer create a tape of her voice, that would be used, while she  lip-synched to herself, once we figured out just how to sing this rambling soliloquy. That was a relatively easy task, one that was only a minute or so of solo madness early in a show.

The other one, though was much more problematic.  I’m writing about this one as we approach the 40th anniversary.  In 1977 Michael Sidnell directed a production of a play by WH Auden and Christopher Isherwood, namely The Dog Beneath the Skin at the University of Toronto. 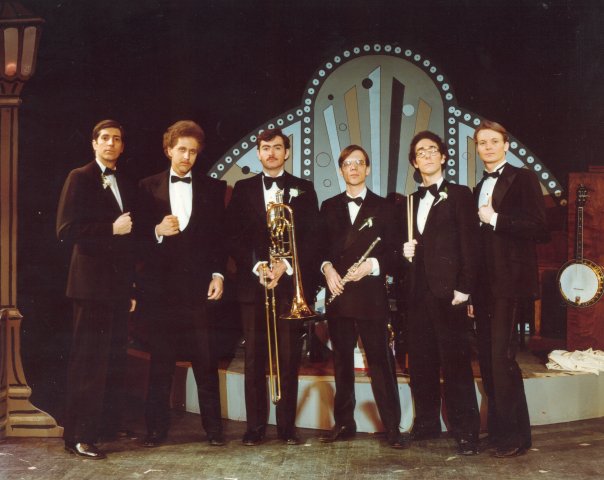 It’s a very political text full of songs.  Sidnell turned to musical artists with whom he’d collaborated before, namely Gordon Woodbury and Rod Taylor, to compose the song settings required by this play that was first produced in 1936 by the Group Theatre.  I believe Sidnell, Woodbury & Taylor were happily exploring the possibilities in the text, employing a small onstage band for their songs.

But there was a bit of a fly in the ointment, and that was one small scene in the play, a scene that led Sidnell to contact me.  I don’t know why he decided to keep it rather than do the logical thing and simply cut it from the text.  Was it kept because it was crucial or because Sidnell –a Professor of Modern Drama busily staging a modern classic—wanted to avoid cuts? There we were on page 107 where it says “The music of the ensuing duet should be in the style of Wagnerian opera.”  Sidnell very generously worked me into other parts of the show, let me work with his band: but I was really there as a token Wagnerian, to make that scene work.

Working backwards from lines and actions that reminded me strongly of parts of Tristan und Isolde and Götterdämmerung I cobbled together a continuous through-composed scene in the manner of a late Wagner music-drama, sometimes seguing from one excerpt into the next, but without stopping.  In places it was meant to get laughs but the key lines were done with all seriousness and pathos.  The point of my re-purposed Wagner was to reproduce the scene as Auden & Isherwood had wanted, to achieve something elusive, verging on impossible, given that they’d left no instructions.  At first I thought I was to be singer in the duet while someone in the band played it, but in the end, we traded places, so that I played  and someone from the band sang.  That was a practical choice given that much of the piano part –lifted from Wagner scores–was quite difficult to play, while the vocal part for the dying Siegfried that I quoted is not terribly difficult singing.  When it finally clicked as written we enjoyed a sudden spontaneous round of applause from the cast.  It was a thrill repeated every night in performance.

That was forty years ago, but the memory is still vivid.

1 Response to Forensic Composition, or when the script is like a CSI