The musical Nine is a bit of a virtuoso vehicle, putting thirteen women, a man and a boy onstage together.  The music & lyrics by Maury Yeston are never easy but quite rewarding, particularly if you have an actual orchestra, as we did tonight for the Podium Concert Productions presentation at the Trinity St Paul’s Centre, conducted by Mark Camilleri.  Musicals with a full-sized orchestra and a big chorus seem to be an endangered species, considering how many times I’ve seen shows done with fewer than a dozen orchestral players, augmented by a keyboardist or two. 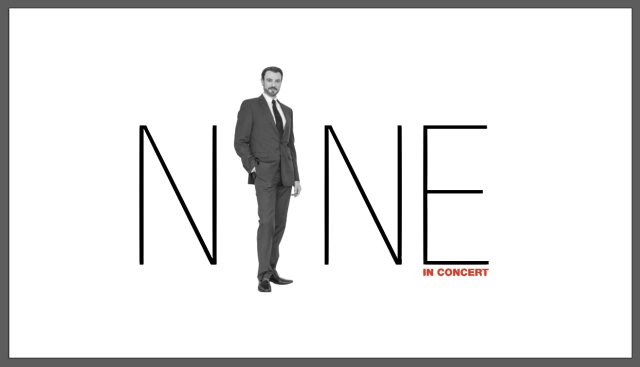 And no wonder that Nine isn’t presented very often. It’s hard, with several challenging roles & complex music.  Based on Fellini’s film 8 ½ , this is a musical one can truly love: but one that isn’t yet well-known.  Ah but the theatre was packed tonight, because getting a chance to hear this score is such a treat, including the numbers that were cut for the film.  I saw lots of theatre people, including at least two directors who –if I don’t miss my guess—are thinking of ways to adapt this brilliant piece.  Can it be reduced from its epic size?  Perhaps, perhaps not (I don’t know). All I know is, that a chance to see it with all those people on stage – brilliant talented singers & actors –is a rarity, an opportunity that you must not miss if you’re an aficionado of musical theatre.

In 1982 I saw Nine on Broadway starring Raul Julia as the film director Guido Contini.  Nine was adapted as a film in 2009 as a starring vehicle for Daniel Day Lewis.  I swear that we get smarter the more often we put on a musical or opera, because the interpretative options are always greater the more times a work is staged, the more times we see solutions to the problems posed by a book and its score.  I remember being irritated by a number in the Broadway production called “The Germans at the Spa”.  It’s a definite tour de force, as the music is fast with lots of quick lines and oh my God suddenly we’re hearing the opening theme from Tristan und Isolde played by the orchestra.  The Broadway solution was to have lots of movement, a frenetic moment onstage to match all the energy in the music: with the result that it was kind of stupid and unintelligible, as though the director was simultaneously showing off (“look at us! aren’t we impressive with the complex music we’re doing!”) while mocking the whole thing at the same time.  If ever there were an argument for a concert performance that was it. Tonight I heard every note and every word of this wacky number, a piece that’s one of the ones missing from the film.  Of course it’s cut from the film because it is a bit of a show-off piece that doesn’t advance the plot terribly much. And ditto for the operatic set-pieces in the second act, when Guido starts digging his way out of his predicament, attempting to make something to film.  What an assortment of stunning pieces.

Juan Chioran is a three dimensional Guido.  We get a flamboyant larger than life personality at the centre of the production, one who happens to sing better than I had expected.  He has two more performances tomorrow, but I didn’t notice him holding anything back whatsoever.  It’s a huge part.  His self-portrait song is quite a marvelous creation, emerging conversationally in gentle singing, that gradually builds with more voice, more passion as it builds to sparkling high-notes, always clearly intelligible.  The sound technicians had their work cut out for them, given the incredible range of vocal outputs, and orchestral accompaniments.

Sharing the stage with Chioran’s Guido are thirteen beautiful women.  As this is done in concert it’s a very theatrical effect. When he’s soliloquizing sometimes they’re listening, heckling and even laughing at him, like a womanizer’s karma personified as though he’s on trial with this jury taking it all in.  And yet they’re all admirers of varying degrees, mostly looking with affection rather than judgement, and at various points in the story, still responding in character even though they may be silent at that moment.

So if you have this visual, of thirteen beautiful women seated across the stage in front of the orchestra, it seems very disciplined, very orderly.  And then early on we’re watching Kira Guloien sing Carla’s seductive song, wearing a tight dress and within short order, upside down on her little chair.  And as a live performance, she had her own drama when her amplification fell loose from her dress – there was really nowhere to hide it, especially when she flipped upside down—and on top of all the skills on display (singing and enunciating while upside down performing acrobatics), she also had to catch the device, stay in character and keep singing as though it was all planned.  That’s why we love live theatre.

Tracy Michailidis as Luisa Contini had the audience in the palm of her hand every time she sang, although her silent moments watching the performance were every bit as powerful.  Rebecca Poff was one of the scary challenging presences onstage as Lillian la Feur first seeming to be his nemesis as his producer demanding results, then showing us her fantasies & her vulnerable side, in a voice perfectly suited to her Folies Bergere song, one of several highlights. Gabriel Mattka as the young Guido gets to sing a simple but powerful song near the end, a fabulous display of musicianship in one so young; no wonder he’s cast, both for his sympathetic portrayal but also his perfect intonation.  There are no weak spots anywhere in this cast, a powerful group of voices all carefully prepared to sing this music idiomatically and with inspiration.

There are two performances Saturday January 13th –a matinee and evening performance—that I am unable to attend although I wish I could be there.  The orchestra’s playing is magnificent especially in the warm confines of the Trinity St Paul’s space. This is a challenging score that needs lots of players to be properly heard.  Oh how I wish Stratford or Shaw or Soulpepper or SOMEONE would notice what an amazing score this is, and produce it. It’s a challenging work requiring lots of talent.  Podium Concert Productions didn’t take short-cuts that I could see or hear.  Saturday’s performances are a rare opportunity that any music theatre fan, indeed any music fan, should seize if at all possible.