Paint Me a Song: three cycles for three painters.

CASP, the Canadian Art Song Project, regularly undertake ambitious programs to push the possibilities of their medium.  To begin tonight’s concert, “Paint Me a Song”, Co-artistic Director Steven Philcox gave some insight into the creation of our program. 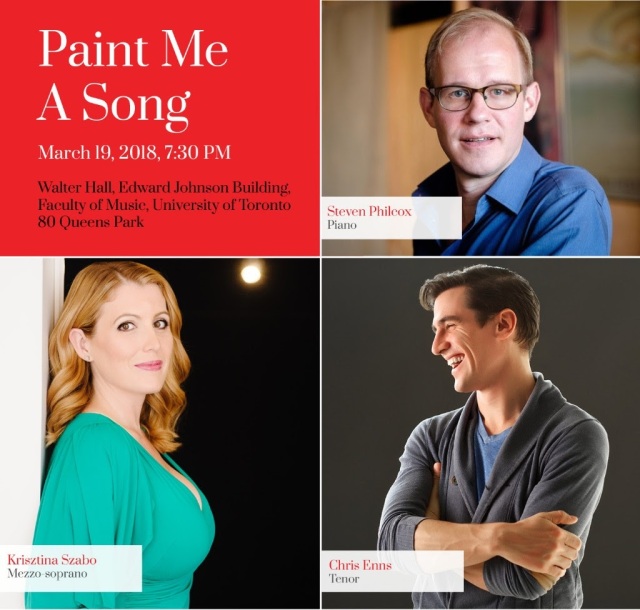 Curating and commissioning seems to be a challenging prospect, when you not only have to plant seeds, hoping they’ll germinate, but also find the right artists and then bring the growing sproutlings before an audience.  It’s as scary as anything a painter or a composer might do.

And so Stephen and his co-AD Lawrence Wiliford gradually built this program from several disparate threads:

The Walter Hall audience was very receptive taking in the work of Philcox at the piano, tenor Chris Enns and Szabó.

The three composers each came at their subjects in divergent ways.

Ryan gave Philcox a run for his money at the keyboard, sometimes very understated, sometimes very frenetic.  In places the page of music likely resemble something of Carr, patterns of notes in arabesques to make a Debussy proud of their design.  I can’t help thinking that Ryan wanted us to hear and even see something like the repeated brush-strokes Carr would apply to her canvas.   At other times we were encountering a canny monologue, the artist brilliantly brought to life by Szabó.  It could be tuneful, sometimes powerful, sometimes more like a stand-up comedy routine.  The shifts of tone were wonderfully woven together.  As this is my first encounter I can’t really comment on whether it’s a unified work or not, as there seemed to be some abrupt tonal shifts, but the contrasts were electrifying.  At one point I was put in mind of the symbolist Debussy of the Proses Lyriques¸ the solemn chords in this case taking us to an ambiguous tonality suggesting something metaphysical & unearthly for awhile until Ryan settled us into something more recognizably diatonic.

In the middle of the program were four short songs from John Beckwith sung alternately by each singer, and an unexpected delight.  This short cycle from the oldest composer on the program was in some ways the most experimental, a playful series of provocations and teases in song.  I’m not sure if it’s because I was hungry that I was mindful of the sumptuous dessert my mom offered me yesterday, as each of these songs was as elusive as whipped cream on the palate, melting in the singers’ mouths and ours as well. 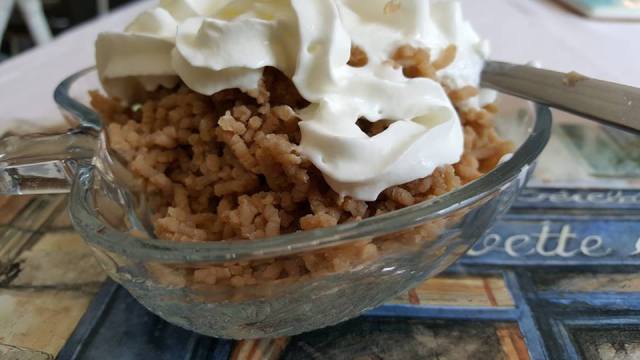 It’s a metaphor, but this is how I experienced Beckwith’s delicious little songs

I should explain that I chose a strategy tonight that might seem ill-advised, which is to read the program notes but to listen without reference to the texts.  I wanted to see what I could discern just from hearing and without reference to my notes.  On that basis Beckwith was especially astonishing, each of his songs like an abstract mathematical model, aided and abetted by the playful delivery from Enns & Szabó.

Philcox & Wiliford cleverly anticipated the way the three pieces would work together when they began, giving us a wonderful range of sounds & styles even though the theme might at first glance have seemed narrow. Moore’s writing is probably the most accessible, as the least likely to represent a significant innovation, sounding closer to pop song than art song. But this most tuneful writing that sounds like music-theatre, and a good match for Chris’s lyrical sound was a great place to begin, to ease us in and get us warmed up.  While Moore’s tunes are pretty, indeed at times very beautiful, I don’t feel that they approach the profundities hinted at in the van Gogh texts let alone his paintings.  Even so Philcox and Enns gave us something quite intriguing to see & hear, urgent and powerful

It was a very impressive outing from CASP. 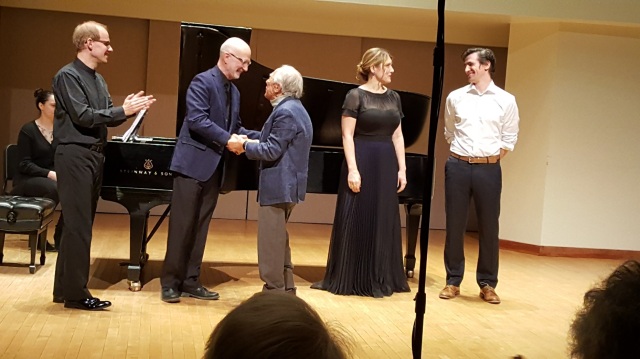 Philcox claps as did we all; Ryan and Beckwith meet centre stage, while Szabó & Enns had earned their rest after lots of singing.

This entry was posted in Art, Architecture & Design, Music and musicology, Reviews. Bookmark the permalink.