The last month of Peter Oundjian’s tenure with the Toronto Symphony is unfolding as a celebration.  We’re partway through a series of concerts, with three more programs to come in the next fortnight.

In addition Chandos have released a TSO recording that in some ways epitomizes everything Oundjian stands for. It’s English music but performed by Canadians, a young group of soloists, including some of the talented players recruited & mentored by Oundjian. 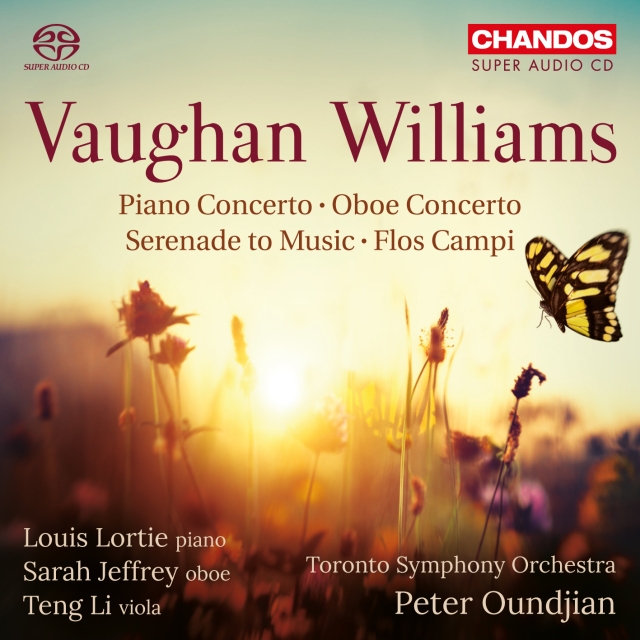 I understand that the music of Ralph Vaughan Williams is a special favourite of Oundjian:

While the four works are varied, they all serve to show off the exquisite sound of a TSO that Oundjian built & trained.

The Serenade to Music is a sensual delight, and as with most of Vaughan Williams output, takes us to a more tuneful & tonal place than what most of his contemporaries were producing.  The Serenade might have been written in the 19th century for its lush tonal palette, a hymn to romance and romantic music itself.  The Elmer Iseler Singers are quicksilver, fluid as breezes and sunshine illuminating the score from within, seemingly effortless.

The Oboe Concerto, composed during the Second World War, came from a composer likely seeking to uplift & inspire, as that’s how this music hits me. It takes us in a more playful & whimsical direction, suggesting a more vulnerable aspect to the composer, both in the achingly beautiful solos from Sarah Jeffrey, and in the textures that surround or answer her oboe.

Flos Campi (or “Flower of the field”) is arguably one of Vaughan Williams very best works.  The inspiration is the Songs of Songs, that most sensual part of the Bible.  Whether you choose to read this as something devotional or just plain sexy, I think your ear will be ravished one way or another, the TSO’s principal viola Teng Li teaming with the Iseler Singers again.

Finally the most surprising piece for me is the concluding Piano Concerto.  It doesn’t sound like the Vaughan Williams I thought I knew.   I’ll have to take the score out of the library to get inside the piece.  The liner notes suggest the influence of Busoni’s Bach transcriptions, which certainly suggests something on the very boundaries of what’s playable: yet I would never have guessed, listening to the ease with which Louis Lortie plays it. There are places that are lyrical, but also places that are more percussive, with a genuine ferocity.

Throughout, the TSO are at the service of the composer & the conductor, a joyful valedictory for Oundjian.  To obtain or download the recording click here.