Toronto Summer Music Festival’s theme for 2018 is “Reflections of Wartime”, in the centennial of the last year of World War I.  Tonight was my first concert, a presentation titled “Tears of Exile”, a program by Studio de musique ancienne de Montréal (SMAM), led by their artistic director Andrew McAnerney. While SMAM sometimes perform with period instrument ensembles tonight’s works were all unaccompanied. We heard 12 singers easily fill the Walter Hall space. 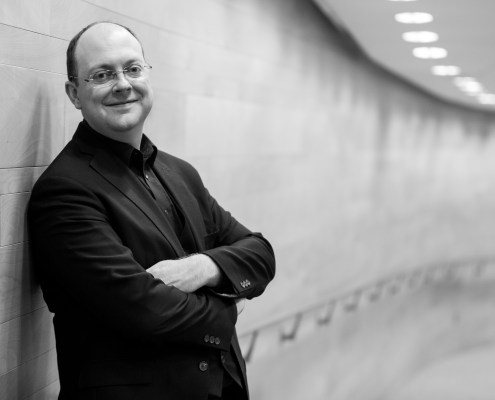 Here’s the programme note that you might expect to explain the rationale for what we heard:

In the 7th century BC Nebuchadnezzar II, king of Babylon, conquered Jerusalem. The destruction of the Temple of Solomon, the ruin of the Kingdom of Judah, and the captivity of the Jews in Babylon were described in the Lamentations of the prophet Jeremiah. The text, which considers this defeat to be a punishment from God, inspired several great composers of the Renaissance. This program features three magnificent and moving polyphonic Lamentations from the 16th century –by the Briton Thomas Tallis, Spaniard Cristóbal de Morales, and Flemish-German Roland de Lassus–, each adapting the magic of counterpoint in the spirit of his respective nation.

Okay, that’s a start, but doesn’t fully explain, particularly in context with the Festival’s theme. Perhaps the best idea would be to tell you what we actually heard in addition to those Renaissance works, a series of works that will be hard to surpass as Reflections of Wartime.

In the first half of the concert we heard Lamentations by Tallis, de Lassus and then a 20th century setting by Ralph Vaughan Wiliams  composed in the first decade after WW I even though employing the text in Latin. After intermission we heard the very same text as the Vaughan Williams but as though we were flashing back to the Renaissance for a setting by Lassus, followed by de Morales. And then we were treated to another 20th century setting: or at least I think it’s a setting. This last one by Rudolf Mauersberger, “Wie liegt die Stadt” was in German without a Biblical textual reference, yet was very much of a piece with the other texts, and sounded like it could be a lamentation from the Book of Jeremiah, if we ignore the missing letters from the Hebrew alphabet: a characteristic found in the Lamentations, and emulated by all the other composers, Vaughan Williams included.

That final work may have referenced Jerusalem –like all the others—but had additional resonance for the composer, who had seen the destruction of Dresden. So in other words for this concert it was as though we were standing outside time, looking at the exile of the Israelites, but with the benefit of those 20th century perspectives. All save the final German text closed with the line in Latin “Jerusalem convertere ad Dominum Deum tuum”, translated as “Jerusalem, turn back to the Lord your God.” Every one of the texts takes up that idea from Jeremiah, that God was punishing sinful humans, remembering, mourning, lamenting. With all the 20th century wartime images we’ve seen, bombs dropping, buildings shattered, one feels the ancient texts & scores with a great immediacy.

It was wonderful to be able to compare the different settings, to hear different approaches to text & to voice, sometimes contrapuntal in a smooth flowing texture, at other times voices emerging out of the background. And when we came to the German text its intelligibility is entirely different from the Latin ones, because the music isn’t a dense counterpoint but more direct statements, its events not something we read in the Bible but have seen in films & photographs.

SMAM have a wonderful versatility. When they’re singing the Renaissance texts you figure that early repertoire and a historically informed style is their strong-point. And then they start singing Vaughan Williams, making more sense of him than any of the local choirs I’ve heard recently, precisely because they are understated, with clear elegant phrasing. The Mauersberger too was excellently executed, the voices unforced and exactly as strong as they needed to be.