Kent Monkman is back.  The show at Project Gallery is only on until September 1st, so see it while you can.   In 2017 “Shame and Prejudice: A Story of Resilience” was one of the highlights of the year.  This time it’s “Miss Chief’s Praying Hands”, a solo show that includes a great variety of creations that conform in greater or lesser degrees to the usual expectations of a visitor to an art gallery.  Sometimes (s)he’s giving us art that engages with the traditions of art, sometimes playing with those traditions, and playing with us too.  When you’re overpowered by one of these huge canvases (“Wedding at Sodom” is 10 feet by 6 feet, for example), you notice how powerful art can be.

I recall feeling unhinged and unbalanced at the show at UC last year.

I caught myself thinking back as I did my laundry earlier today: that if someone were to put me into a dryer, the best thing would be to go with the flow rather than struggle.  I think the same is true when an artist is playing with you, the way Monkman plays with us.  Size matters, and not just when the paintings include genitalia.

And there are indeed sculpted hands that might put you in mind of Dürer’s praying hands, although Monkman offers coloured versions. 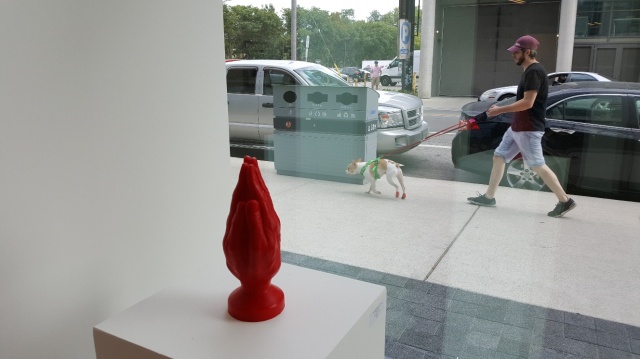 There are a couple of videos playing outrageously.  In one we watch a nervous priest approach someone we might call Miss Chief, then run away.

I’m in awe of the wardrobe.

You may be outraged, you may laugh, you may cry.  I don’t know that there’s a right response, only that I’m grateful for work that does many of the traditional things art used to do, employing recognizable references & styles, yet often mocking those traditions.

Kent Monkman is a Canadian artist of Cree ancestry who creates provocative reinterpretations of romantic North American landscapes. Themes of colonization, sexuality, loss, and resilience – the complexities of historic and contemporary Indigenous experience – are explored in a variety of mediums, including painting, film/video, performance, and installation.

Monkman describes Miss Chief Eagle Testickle as “a gender bending time-traveling two spirited alter ego” representing “the gender variance that was present in traditional indigenous cultures across North America when the settlers arrived. She embodies the flawed and playful trickster spirit to tease out the truths behind life’s painful twists and turns. She is central to my work, reversing the gaze and representing an empowered antidote to colonized sexuality.”

The title is serious.  The art is much funnier than last time.  Forgive me for saying that as the show still includes a couple of overpowering pieces.  But I feel that Monkman is being easier on us this time, using the gentler path of satire and parody rather than the unbearable power of historical chronicle (still present in “The Scream”) and reminders of cultural genocide.

Here’s my last reminder to you. 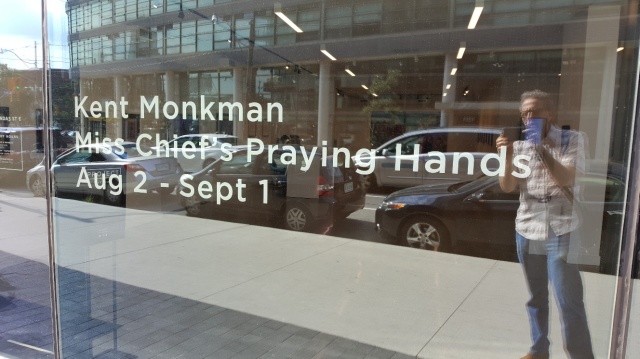