Posted on December 8, 2018 by barczablog

Will King is a graduate from the BFA Acting program at the University of Windsor. With training that includes the Moscow Art Theatre School, & workshops at R.A.D.A. the Stratford Festival, and the S.I.T.I. Company from New York, he is also a certified teacher of the Michael Chekhov Acting Technique (GLMCC).

One of the founding members of Seven Siblings Theatre, Will’s first play From the Water is set to open Dec 12th at Tarragon Extraspace. Busy though he’s been we managed some Q & A about himself, Seven Siblings and the new play.

I’ll be careful here… My parents are both artists. So I guess I can blame some of my art addiction on them, although neither of them comes from the theatre world… so maybe that’s all on me. My mom is a piano and music theory teacher, and worked as a music and choir director for a long time. My Dad is an architect and bass player. Music was always a big part of my life growing up, and my family is a strong supporter of the arts. I still create music, and DJ sometimes, but I fell into theatre pretty quickly, and I’ve been obsessed with film since I could breathe. My parents are also both self-employed, so I think subconsciously I always thought it was possible to succeed in a field without a concrete career path.

What is the best or worst thing about what you do?

I think that’s for others to decide!

I’m going to keep pursuing this type of storytelling until the day I die, so in my mind, I don’t think it matters what I’m best or worst at right now. I’ve got a high expectation for myself, and I always try to do my best work, so I’ll just stay focused on that. But I will say I have an impractical variety of interests, both professionally and personally. I’ve worn almost every hat in theatre (actor, director, producer, writer, acting coach, choreographer, stage manager, sound designer, photography, marketing, publicity, box office, projection design, etc. etc….). Acting is the priority right now. It’s what makes me happiest, and that’s the career path I’m working on.

Realistically, the worst thing I do is burn out. I frequently wish I had an extra day in the week. It’s the reality of juggling a lot at once, but one day, if I’m really lucky, I can spend all my time doing this stuff, and the day jobs can fade away.

I’m a sucker for Sci-fi, and I’ve really doubled down on that recently. I guess this play is really evidence of that! I’m a film nerd. I get excited about seeing films before the reviews come out and making my own opinions at film festivals. I love Guillermo Del Toro, Ridley Scott, Kubrick, Miyazaki, Barry Jenkins, the Coen Brothers… I thought Clair Denis’s new film High Life was the best thing I saw at TIFF this year. There’s some great stuff on TV too, I just don’t have enough time to watch it all. I made time for Westworld though!

I’m really into electronic music. Not exclusively, I think all genres of music have merit when executed properly, but I’m really drawn to electronica. I think it’s the music of our time. It allows for the most experimentation (besides maybe jazz), and provides the best opportunity for pure well-crafted composition. I think people have this idea that it’s rigid and repetitive, but I find the opposite to be true. You’re free to play in a full and specific range of frequency, rather than just 12 notes, and you can make an instrument out of anything. ANYTHING. Every year I see a new instrument that makes my jaw drop. Radiohead, Robotaki, Arcade Fire, Kaytranada, and The Gorillaz have gotten most of my ear space for the past month.

In terms of theatre, I want to see work that’s specific, passionate, transformative, engrossing, and grounded. Every story is worth telling if you do it in the right way for the right reasons!

Retention. I’m terrible at remembering facts and dates. Trivial pursuit is my nightmare. I always want to know more about the why than the when, and it just doesn’t stick.

The power of flight would be cool. I’m afraid of heights, but I probably wouldn’t be if I could fly.

I like staying in and watching a hockey game with my dog Banksy. I latched onto hockey as a healthy hobby when I was in theatre school. It’s something I admire and have zero actual stake in. I was raised a Leafs fan, and now I think it’s finally starting to pay off.

You’re a member of Seven Siblings Theatre (you can read their mission statement here). Please explain the origins & meaning of the company’s name.

It comes from the Michael Chekhov work. There’s an awareness of the Four Brothers (the actors’ feeling of ease, form, beauty, and the whole), and an exercise called the Three Sisters (where you discover inner rising, falling, and balancing). Together they form “Seven Siblings.” It’s like an abstract family picnic. It’s easy to remember, and I think the name has really helped ingrain our values into our identity.

Michael Chekhov boiled down a lot of ideology into clear, simple, psycho-physical exercises. He got the body and mind working together to make practical choices, and ultimately he created the most inclusive technique I’ve ever learned. It gives depth to my work, it challenges me to concentrate and actively engage my imagination in a practical way, and it’s FUN! It reminds me why I love acting.

I saw in a press release that you describe your work as “Fantastic Realism”. Please explain what that means.

Fantastic Realism can be supernatural, larger than life, existential, absurd, or explosive, but it must be grounded in the world we live in. It’s not strange for its own sake, it exists to reflect our realism back to us, in whatever style serves the piece or the artists that make it. These worlds allow ample imagination for both actors and audience members, and evokes imagery that surpasses everyday naturalism.

To quote Andrei Malaev-Babel in To the Actor, Michael Chekhov “always realistically justified his character, both emotionally and psychologically. His characters remained complex human beings, but perhaps the kind of human beings one mind see in a dream or imagine in their fantasies. That is why, in the eyes of the audience, these characters often manifested universal ideas, such as life and death, love and hate, beauty and ugliness.” By exploring with myth, nature, and fantasy the actor can engage in archetypal storytelling and elevate their work with fundamental clarity.

Please put From the Water into context for us, as a piece done by Seven Siblings Theatre.

The show both stylistically and thematically is a culmination of my interests. There’s a bunch of easter eggs for film nerds, and my pop culture references flow through more than I originally realized…

The play is a domestic drama in a supernatural crisis.  Downfalls (supernatural storms) are causing mass disappearances around the world, and it’s believed that hyper-evolved creatures are wiping out the human race during the blackouts. To combat this epidemic, humankind has started cloning capable people, and fighting back for dominance. That’s the world and the given circumstances. The play itself focuses on the lives of Alex (the mother), Peter (her son), Ava (the abandoned), and a few other characters… Alex wants to stay, Peter wants to fight, Ava wants closure, and the Numbers are preparing for extinction.

The piece is a textbook definition of Fantastic Realism (see above), and I think Madryn, Erik, and I are all deeply connected to the power Science Fiction can bring to theatre.

Seven Siblings has produced over a dozen shows within our mandate, but by building one from scratch I think we’ve really been able to capitalize on what make our medium valuable.

Please elaborate on the team bringing From the Water to life.

Erik Helle – who I respect and trust more than most people in this world – is directing the show. He’s been involved since the staged reading of the play, and he has really helped me find simplicity and clarity in the storytelling. I’ve rewritten the ending of this piece several times, but it was only when he stepped on board to direct, that we found an ending that satisfied the characters I’d created.

Madryn McCabe, our unflinching producer (and co-owner of Seven Siblings), has made this possible, and having her support and confidence as I explore this uncharted territory as a playwright has been a great gift. 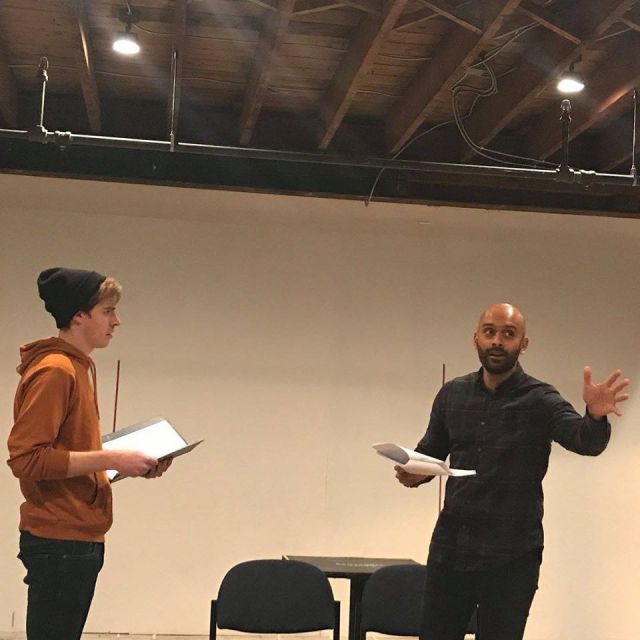 Will King (left) and Shawn Lall

Our actors (Anna Silvija Broks, Shawn Lall, and Hilary Wirachowsky) have been extremely helpful in defining the play. They’ve given open and informed feedback, while respecting the agency I have over the super objectives and story archs, and I have a tremendous level of gratitude for their contributions. 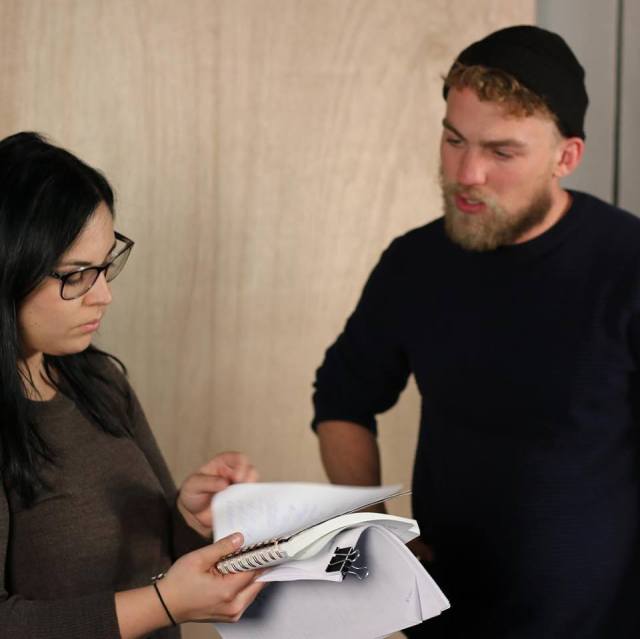 Our production team is also loaded with superstars. Our Stage Manager Giulia D’Amanzo has been an invaluable second pair of eyes and ears for the work, and Chin Palipane is making some sweet sweet theatre magic on the lights. My Dad (Stephen King) has helped us make an actors playground with our set, and Nate Bitton (my favourite Fight Director in the city) has put his work into the show as well. 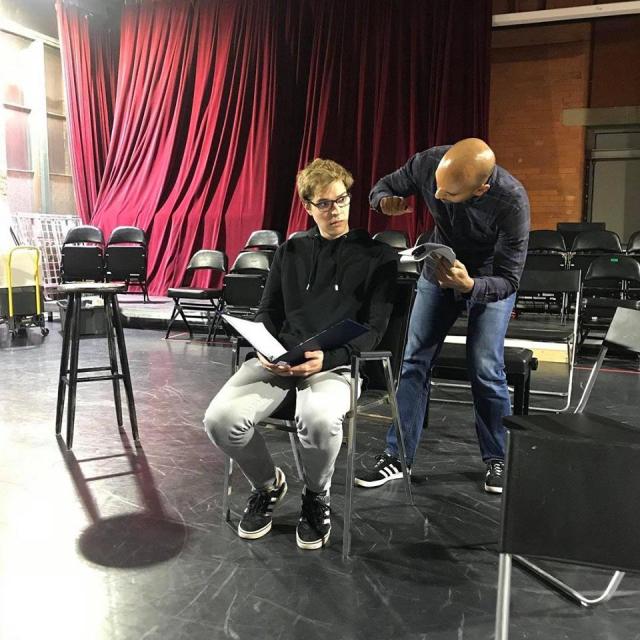 Will King and Shawn Lall

I’ve never done this before. I’ve never written a play of this length, or performed in something that I wrote being directed by someone else. Having the level of support that I do from this team is insane to me. And I know this all sounds really melodramatic, but it’s true.

In the press release From the Water is described as a “grounded science fiction thriller”. Can you compare it to any other sci-fi we might recognize?

It’s more like Bladerunner or Black Mirror, less like Doctor Who or Flash Gordon… There’s dark comedy, but it’s not campy. The characters in this play are people that we could meet in real life. Regardless of the extreme circumstance of their being, I hope there’s a sincere vein of truth to them. They’re archetypal, and hopefully through framing that we see reflections of our self. Yes, there’s creatures and clones, but it’s a play about human beings, evolution, family, and the value we place on being “an individual.”

Please talk about the development of From the Water.

I started writing the play about two years ago. I was really attached to the idea of clones. It used to be a two-hander. More of a “war play.” The stories morphed and expanded since the first spark of an idea, but I think the inspiration is still in there.
We’ve done some exploration with Madryn and the Michael Chekhov work to discover character, and define the relationships within the space, but really it’s been a steady grind on clarity and text work. More than usual for us. I think we all want to be really specific. We’re deep in the trenches of the scenes, and we’re trying to give it everything we’ve got.

Do you have any influences / teachers you would want to mention?

I’d like to thank everyone that has taken the time to see us, and to bolster our company. Everyone who has contributed to my skillset as an actor, writer, and artist on the whole. And a BIG shout out to the Great Lakes Michael Chekhov Consortium, and Lionel Walsh! Because without him, this company wouldn’t exist.

1 Response to Questions for Will King – Seven Siblings Theatre