The Woods are Dark and Deep: is good

You will laugh, you will cry, and you will certainly enjoy The Woods are Dark and Deep, a new work I have just seen today at the Factory Theatre, from Pulse Theatre.

When you go see a new work performed there are at least two options available:

But the new play from Mladen Obradovic suggests a third topic required in this case, because it’s a play about a historical event that’s never really had any attention. Why don’t I start with that first.

Did you know that Eastern Europeans were interned in work-camps in the First World War? We hear lots about the way Japanese Canadians endured being displaced and re-settled in the Second World War because they were identified as the enemy.

But it’s news to me that it happened in the earlier war too.

And even more disturbing to me is the discovery that the groups singled out were from the Balkans, the Ukraine and Hungary, speaking as a Hungarian.  But of course these were  countries identified as “the enemy”. Presumably the same would have happened with Germans, although that’s not part of this story.

You have to hand it to the planners, the powers that be in Canada during WW I, who conceived this idea. They made good use of our landscape, which has everything to do with the title. You can’t escape if you fear barren forests & the wild animals that live there, never mind the added charms of our winters.

This is a different world from our own, before the kind of medical care we take for granted. When people got sick in those days? There was a huge influenza epidemic towards the end of the war, killing millions of people. If you broke a bone or had a concussion, no one received the kind of care we now get.

Now imagine that you have an injury while you’re in a prison camp..!

I saw The Woods are Dark and Deep as the finale to a kind of birthday celebration, believe it or not.

Let me repeat what I started to say above. The debut of Mladen’s play is an event. I laughed a lot but shed tears in a few places. There’s a boy- girl drama at the centre of the story, told in a style that’s a cross between epistolary romance and 20th century authoritarian. So while there are letters going back and forth, they get censored.

Mladen’s handling of these devices is masterful, very economical considering how much story he’s telling.

We’re visiting a very different world. I can’t emphasize this enough. I go CRAZY watching drama at our major theatres or feature films that are replete with anachronism, errors in the cultural reference points, likely caused by actors improvising with their 21st century millennial sensibilities, polluting whatever accuracy the writers may have created.

But for once it’s done right. There’s a fair amount of music in this show, too. It’s not only that it’s source music (aka diegetic music), performed by people onstage (as opposed to non—diegetic music as we see so often in film scores: from an invisible source outside the world of the play) but with authenticity. I don’t know Serbian culture, I only know that when someone onstage is singing and half the audience joins in? it’s profoundly stirring.

Oh yes, there’s also the matter of the performances / performers. Sorry to sound like a broken record, but there’s Mladen again, who plays Nebojsa, a troubled / troubling character. I think if you see the show you’ll be like me, liking everyone onstage: except the one that’s played by Mladen, a totally miserable SOB. In his defence, he’s in prison, so no wonder he’s unhappy. But I am intrigued that Mladen wrote this part for himself, wondering if he played it because he wouldn’t visit this upon any other actor, or because he truly understands the character. Mladen gets these wonderful moments when he can go completely against the grain of everyone else onstage, although he is often arguing or fighting with the others.

When was the last time you saw a new play with nine characters in it? Everything new these days seems to be for four or fewer: because of budgetary pressures naturally, not due to any creative reasons. In Shakespeare’s time everything was for huge casts (double- and triple-cast likely), so there’s a wonderful weight to this simply from the number of people onstage, each fully fleshed out.

I can’t decide who’s my favourite although there are several candidates. Janko (Dewey Stewart) is your classic romantic lead: but thwarted by the simple fact he’s imprisoned, far from the girl he loves. Will he be able to marry Claire (Sophie McIntosh), the girl who loves him back? In the meantime we get to see their correspondence written with the dubious assistance of the prison censor.

Then there’s the family of Oleksa (Ratko Todorovic) & Anya (Biljana Karadzic) plus their children Olessya (Mila Jokic) & Oleh (Simeon Kljakic), who figure in the story in so many ways. Olessya has a crush on Janko, helps him write his letters to Claire because her English skills are so much better than Janko’s. Nebojsa is teaching Oleh guitar. Oleksa is the strongest man at the physical labour necessary in the camp: but he’s disabled in other ways. 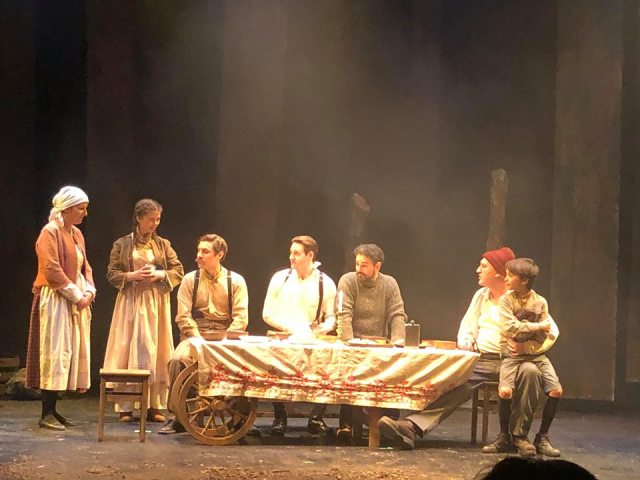 I don’t want to give the story away, so I’ll simply say that as in Shakespeare, everyone’s part is significant whatever its size. The strengths of the cast come at you from all sides at every moment. Some of that is likely the writing, some of that is the performances.

I should mention too director Sandra Cardinal who made it all flow, kept it cohesive. While there is no dramaturg credit given, Cardinal likely had a hand in bringing the new play into the world, bringing this fascinating group of characters to life.

It’s a very romantic tale that surely will bring you to tears in places, sometimes from what an individual faces, sometimes from the politics & the struggles confronting everyone on stage.  I wonder if there’s any thought of adapting this into a film? I hope so.

But for now, your best chance of seeing this wonderful show is at the Factory Theatre until March 27th. You won’t regret it. Go see it.